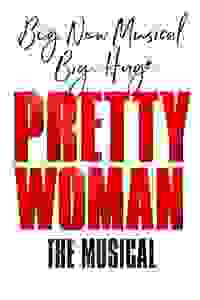 A stage adaptation of the 1990 film of the same name with music by Grammy Award winner Bryan Adams.

Vivian Ward, a carefree Hollywood lady of the evening, is hired by a wealthy businessman, Edward Lewis, to be his escort.

Starring Aimie Atkinson ('Six', 'In the Heights') as Vivian Ward and Danny Mac ('Sunset Boulevard', 'White Christmas') as Edward Lewis. This production is recommended for ages 12+.

See it if you loved the film enough to want to see it recreated on stage. The costumes, staging, acting and singing are are all competent enough.

Don't see it if you’re expecting more than a derivative musical with a completely forgettable score- even if it is by Bryan Adams- and a lacklustre story.

See it if You like the original movie. Singing was brilliant and set was great. A fun night out!

Don't see it if You want to see a ground breaking musical.

See it if You love the film

Don't see it if You can’t stand cringy songs

See it if really references the film, which is great if you live the film, less good if you are too young to have seen it first time around.

Don't see it if You want to be uplifted or have a more modern soon on the film story.

Don't see it if You are expecting a true story

Don't see it if You like more serious subject matters

See it if You like musicals, you liked the film, like seeing great singing and acting with a romantic plot

See it if you are a fan of the classic movie from HOLLYWOOD! Also, if you’re a fan of Bryan Adams. I didn’t expect to like this but I was entertained!

Don't see it if you expect it to be a carbon copy of the film. Go with low expectations and you may surprise yourself!

‘Pretty Woman: The Musical’ is a good times and low expectations sort of show that does the minimum expected of it, and no more... cynical, soulless, nostalgia cash-in.
Read more

Yet this is essentially the same Pretty Woman, with cut-and-pasted dialogue and carbon-copy clothing to match the original, only with added song and dance to offset the lack of close-ups.
Read more

If Bryan Adams and Jim Vallance's score lacks serious break-out hits of its own, there's at least a curtain call reprise of Roy Orbison's famous 1964 hit single that gave the original film its title to send you out on a high.
Read more

Yes, it’s a musical about prostitution, but this adaptation of the 1990 Julia Roberts/Richard Gere rom-com is a triumph of exuberant zest over dodgy subject matter. It matches the charm of the film but has a subversive energy all its own.
Read more

The score by Bryan Adams and Jim Vallance often veers into the bland...the nascent love story between Giulio and Mr Thompson feels, for a time, like there’s another, more daring musical fighting to get out of this one.
Read more

If Pretty Woman – The Musical had any conscience it would adapt itself to the actors performing it and to the era in which it has been launched. That it simply wants to be a facsimile of a once popular movie, reveals the ugliness at its core.
Read more

If you’re not a fan of the film, there is no reason to buy a ticket for Jerry Mitchell’s production. But if you’re seeking to relive popcorn memories, you will have fun muttering along with the romcom’s snappiest lines.
Read more

Pretty Woman won't be the last cynical miscalculation to hit the West End, but if it brings [Bob Harms] to a broader public, well, no harm done there.
Read more