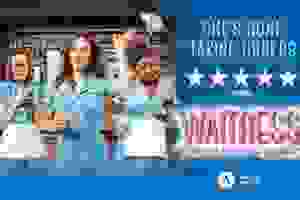 See it if excellent transfer of the Broadway hit to the West End. (I saw Kat McPhee and Jack McBrayer) Powerful singing, heartfelt acting, sweet story

Don't see it if you don't like fun, funny shows about women who bond together at the diner where they work and dream of better lives.

Don't see it if You dont like funny intelligent musicals

See it if You crave the best pie in town surrounded with sugar, butter, flour and beautiful music, romantic story and river of tears.

Don't see it if You don’t have a heart that will be broken at the show.

See it if You will be pleasantly surprised with this one. Great songs, some comedy and drama too. ‘She used to be mine’ is one of my favourite songs

See it if You like fun, contemporary musicals with catchy songs

Don't see it if You only like classic traditional musicals

See it if You like fun fluffy musicals with some great songs.

Don't see it if You are a feminist. There was some behaviour not acceptable today e.g. men pursuing women after said she no because she wants it really.

“'Waitress' is made from the very finest ingredients, but often they don’t actually feel like ingredients that should have been put together...It’s still a classy show, though. McPhee gives a beautifully weary performance...Bareilles’s country-rock-ish songs are funny, literate and enjoyable...Paulus keeps everything moving with a slick dynamism that frequently belies the changes in set, scene and tone. There’s really a lot to like; I just struggled to like all of it all at once.”
Read more

“After two hours of tuneful entertainment my carapace of skepticism had been breached, leaving warm appreciation oozing out. And if you’re averse to tongue-in-cheek, culinary-related metaphors, then do stand warned...this is a show that takes joyous relish in whisking together the staple references of its workplace milieu with all the confused emotions that attend its principals’ appetite for love and companionship...The comedy songs are very funny...The ballads are meltingly lovely.”
Read more

“Initially, the show struck me as raucous and improbable. Bareilles’ lyrics often get lost under an over-loud onstage band and I couldn’t wholly believe in the plight of the pregnant protagonist, Jenna...But I found myself warming to Nelson’s book and to the vigour of the songs...The performances, in Paulus’s lively production, are very much part of the show’s appeal...The show is a tribute to female solidarity and McPhee is well supported.”
Read more

“An odd concoction...It takes its wild ingredients and mixes them together to make a strangely satisfying and charming show...It's a peculiar but winning conceit...Bareilles provided music and lyrics in a variety of gentle pop and country styles. Paulus brought the entire thing together with a female-dominated creative team...McPhee is undoubtedly one of the reasons to go to see ‘Waitress’...The show has an attractive ability to undercut itself...All in all, ‘Waitress’ is a treat.”
Read more

“A romcom set in the workplace and a feminist drama in which the protagonist makes painful progress to the belatedly assertive moment when she boots out her smugly abusive husband. Admittedly, there are moments of discomfort but it says a lot for the fast sass and wonderful take-it-or-leave-it silliness and the occasional sugar-free sequences in Nelson's deft book that the spot-on cast...mostly manage to give these elisions an elating good humour and humanity."
Read more

“Though some of its ingredients are fluffy or icky it eventually whisks up a satisfying mixture of whimsy, warmth, and sadness...Bareilles has crafted a propulsive score and lyrics packed with poppy nostalgia. The best of them are soaringly delivered by McPhee...Paulus’s production is fluent without being unpalatably slick...The show has cartoonish elements, but mostly subverts its moments of sentimentality and silliness, and there’s a whole lot of humour baked into it.”
Read more

“One of the best scores to be written in recent years...Perfectly constructed pop songs with a conversational feel, full of piano-driven riffs and jam-packed with baking metaphors...Every song is instantly singable...It’s like someone’s taken a tried-and-trusted Delia Smith recipe and created a gourmet version. Every ingredient is the best quality – the songs, the direction, the choreography, and the characters each combined in a careful, complementary way.”
Read more

“This musical took me by surprise: I expected something much less touching, gritty and moving. It has heart to spare and McPhee’s voice has the lilt and lift that takes you away from yourself...This is one for the XX chromosome brigade, a grown-up ‘Legally Blonde’...There is not a weak link in the cast...The idea of mom and apple pie is a cliché, of course, but this story really does end up centring on both...A slice of Five Star Musical pie.”
Read more