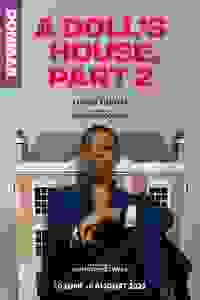 A Doll's House' by Norwegian playwright Henrik Ibsen sparked great controversy when it first premiered for the way it challenged gender norms.

Fifteen years after the end of 'A Doll's House', Nora Helmer knocks on the door she slammed shut over a decade earlier. She left her husband, children and nursemaid in pursuit of something more. She has returned as a successful feminist novelist, but has returned with an urgent request.

See it if you love Noma Dumezweni, as I do. She absolutely commands the stage as usual.

Don't see it if you’re expecting the Laurie Metcalf comedic version of this play. I was surprised to see this again w/a different, more serious tone.

See it if you can handle a particularly wordy play.

Don't see it if you don’t want to see a drama. Read more

See it if you enjoy a show that challenges you to think, that’s sublimely acted and offers closure the original lacked, without subverting its message

Don't see it if you either didn’t like the original Ibsen work- this will do precious little to change your mind- or if you don’t think a sequel was needed.

91
A near great play

See it if This is a wonderful play — so thoughtful and intelligent — written by a man about a woman’s inner life and needs.

See it if Like a short show with no interval amd a fan of Ibsens story. The set is also great

Don't see it if stripped back staging and many words

See it if You’re a fan of Ibsen and curious to see a clever, well acted take on how Nora’s story may have developed.

Don't see it if Ibsen isn’t your thing – truth is it probably is best to have seen the original to get full value from this piece.

See it if You love to see great actors at work. Noma Dumezweni’s performance is outstanding as she takes you on her journey with great subtlety.

Don't see it if You’re looking for a play with a lot action and movement. And you don’t want to your thoughts provoked.

See it if you want intersting debates around a wife's role and how so much and so little has changed 150 years later.

Don't see it if plays more about character rather than plot are not your thing.

If ‘A Doll’s House, Part 2’ has an obvious weakness it’s that Hnath’s determination to not appear to revise Ibsen’s story leads to some slightly weird plot beats ... [but] Hnath’s play is a razor-sharp [and] frequently hilarious.
Read more

The beauty of Hnath’s account, which was seen on Broadway in 2017, is that it honours the validity and modernity of Nora’s desertion. Noma Dumezweni is magnificent. Essential viewing.
Read more

The plot doesn't make sense. I kept wondering what this play would have been like if it had been written by a woman ... As it is, everything seems equivocal. It's an interesting evening, but not a satisfying one.
Read more

Lucas Hnath’s sequel ... is closer to a thought experiment than a fully engaging piece of theatre. But it’s an intriguing piece all the same. June Watson is excellent as the faithful Anne Marie.
Read more

You could argue that the climax doesn't quite deliver the anticipated pay-off and that the narrative contortions carry on a beat too far. [Dumezweni 's] performance is a standout that is likely to register, and resonate, for some considerable while to come.
Read more

This meaty text is an absolute treat for the cast. Noma Dumezweni is a powerhouse Nora. If not quite as earth-shattering as the original, Hnath’s play still asks big, existential questions ...This blistering drama is just the beginning: the conversation will run and run. Ibsen would surely approve.
Read more

Noma Dumezweni is a compelling lead ... But there is something a little too controlled about Hnath’s play, as if the characters are being held up for careful study but never quite let off their leash.
Read more

Talented actors could not rescue a plot that lacked complexity and depth, leaving the audience with nothing of value beyond the most clichéd arguments against marriage. At best a touch-and-go exploration of its characters, the play is neither thought-provoking nor emotionally evocative.
Read more