Best Actor in a Featured Role in a Play

Who’s Ahead in the Tony Races? We analyzed the odds for "Best Actor in a Featured Role in a Play!" 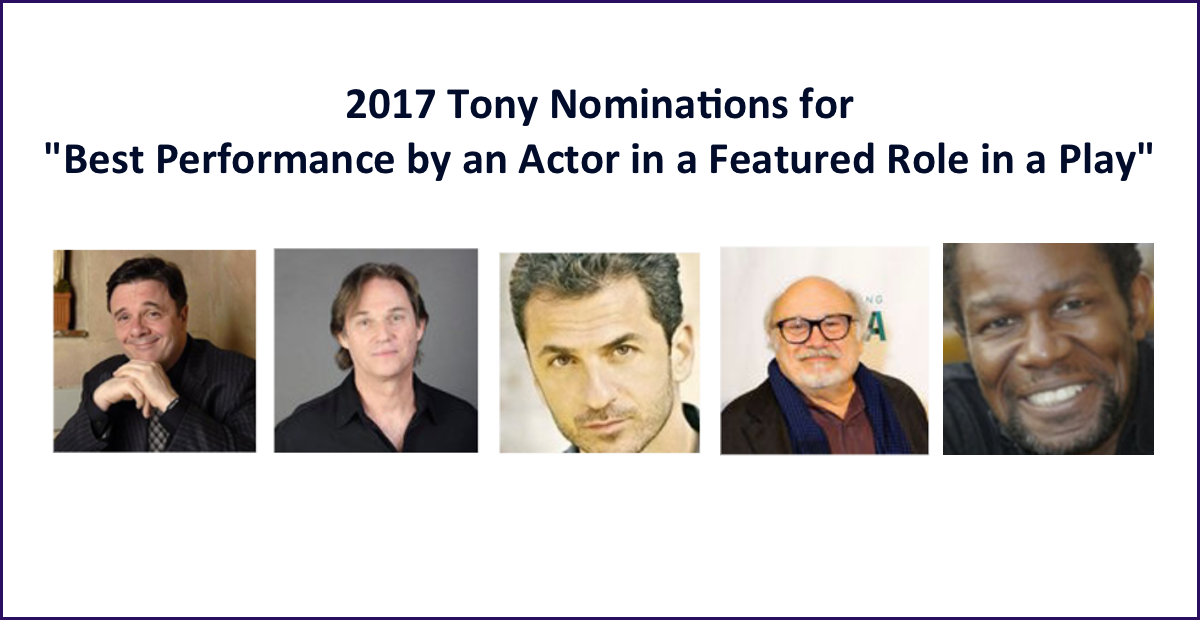 Working For Him: In a serious play about Middle East conflicts, Aronov’s character is the only one having fun. With his bravado and flashy clothes and funny impressions of political leaders, he adds a new, lively dimension to the show that makes him unforgettable.

(2) Danny DeVito as Gregory Solomon in “The Price”

Working For Him: Much like Aronov, DeVito storms into his play and makes it funny. As a nosy furniture appraiser, he keeps butting into a family’s tense arguments about their parents’ legacy, and every time he does it, he steals the show. The fact that this is Danny DeVito we’re talking about -- who has never been on Broadway before -- adds the delightful feeling that we’re discovering something new about an actor we’ve known for ages.

Working Against Him: DeVito’s lack of stage credentials may push voters toward actors who have paid more theatrical dues.

(3) Nathan Lane as Walter Burns in “The Front Page”

Working For Him: The role of Walter Burns, the tyrannical and devious managing editor of a New York newspaper, wasn’t actually written for Nathan Lane, but it seems like it should’ve been. This is a perfect match between a performer and a comedic role.

Working Against Him: But is it too perfect? Voters might feel that Lane has already received enough awards for this type of acerbic character.

(4) Richard Thomas as Horace Giddens in “The Little Foxes”

Working For Him: Thomas has been working on Broadway since he was a child actor in the late 1950s, yet this is his first Tony nomination. Considering his impressive career -- which includes a landmark role on TV’s “The Waltons” -- he certainly deserves a few accolades, and his turn as an ailing Southern gentleman trying to outmaneuver his scheming wife is juicy fun.

Working Against Him: This play is really about the ladies, and this revival is especially about Laura Linney and Cynthia Nixon swapping roles from night to night. Thomas is in danger of getting overshadowed.

Working For Him: Thompson is one of the most respected actors in the industry, thanks to his towering performances in classic plays by Shakespeare, Ibsen, and O’Neill. Now his work as the manager of a car service in August Wilson’s play has given his peers a chance to recognize him on a major scale. It helps, too, that he’s the only actor nominated from his cast, which many felt did the strongest ensemble work on Broadway this year.

Working Against Him: “Jitney” closed in March, which may cool Thompson’s buzz.

THE BOTTOM LINE: This one’s exciting. DeVito and Thompson will both get lots of votes, with Aronov threatening an upset. In the end, though, Show-Score members are right to count on DeVito’s charm and comic timing to carry him across the finish line.

AND THE WINNER IS: Michael Aronov, "Oslo"
<Previous    All Categories     Next>