Learn everything you need to know about "Cats" at Show-Score, from cast to plot, to what made the show unique and successful.

Catch the Jellicle Songs of "Cats" | By "Cats" the musical

If you went up to a stranger and asked them to name a successful Broadway musical, chances are fairly high that "Cats" would be one of the first they come up with. But not many people know the history of this legendary show!

"Cats" the Musical is based on T.S. Eliot’s work “Old Possum’s Book of Practical Cats,” which composer Andrew Lloyd Webber would later cite as a childhood favorite. It’s a whimsical collection of poems about the psychology and sociology of - what else? - felines. Written in the 1930’s, the book is a selection of letters to his godchildren. Fun fact - T.S. Eliot also provided the cover illustrations for the first edition of the work, with later editions illustrated by Nicolas Bently, Edward Gorey, and Axel Scheffler.

The poems cover a wide variety of topics and characters. Some of the more famous and recognizable poems include: “The Naming of Cats”, “The Rum Tum Tugger”, “Old Deuteronomy”, Mr. Mistoffelees”, “Macavity: The Mystery Cat”, and “Gus: The Theatre Cat”. Many of these poems would serve as the inspiration for different characters and song numbers in the musical!

The first musical adaption of “Old Possum’s Book of Practical Cats”  was actually created in 1954 by the English composer Alex Rawsthorne. He set six of the poems to music, and had actor Robert Donat record the lyrics. Another English composer, Humphrey Searle, also composed another work around the same time, which he called “Two Practical Cats,” focusing on the poems about Macavity and Growltiger.

The most famous musical adaption is, of course, "Cats" on Broadway, which tells the story of a tribe of cats called the Jellicles. Each year, all of the cats get together and make what is called the “Jellicle choice”, where they decide which cat will move on to the Heaviside Layer (a metaphor for heaven) and return with a new life.

Synopsis be warned, there are spoilers!

"Cats" the Musical opens on an elaborate junkyard. As the cats arrive onstage and introduce themselves as the Jellicle tribe, they sing “Jellicle Songs for Jellicle Cats”, frequently breaking the fourth wall between audience and performer (which they will continue to do throughout the show). They sing “The Naming of Cats” to explain how the different groups of cats are named, then Victoria the White Cat dances and invites everyone to the celebratory Jellicle Ball, which only happens once a year. Munkustrap, the second in command, explains that Old Deuteronomy, the head of the Jellicles, will tonight select a cat to travel to the Heaviside Layer and be reborn; this is known as the Jellicle Choice.

Many cats audition for the chance to travel to the Heaviside Layer. Jennyanydots, a tabby cat, enters and sings “The Old Gumbie Cat”, but is interrupted by The Rum Tum Tugger, who sings his over-the-top song “The Rum Tum Tugger”. Suddenly, Grizabella, The Glamour Cat, enters. She is an old grey cat who has been shunned by the other cats, who are both afraid and repulsed by her tattered features. Saddened, she leaves, and is followed by Bustopher Jones, a prim and prestigious cat, and the troublesome Mungojerrie & Rumpleteazer. And a loud clang lets the cats know that the mischievous Macavity is nearby!

Finally, Old Deuteronomy enters. He is the oldest and most respected of all of the cats. Overjoyed to see him, the other cats put on a play entitled “The Awful Battle of the Pekes and the Pollicles”. The cats dress up as two fighting groups of dogs, until it is time for the Jellicle Ball, Grizabella re-enters, but is again, rejected by the other cats.

After the ball, Gus comes forward and sings “Gus: The Theatre Cat” where he reminisces about his days as a famous actor. Other cats tell of their adventures, most notably, Skimbleshanks, who is in charge of the night train to Glasgow. Suddenly, Macavity enters! Known as a “master criminal”, he and his henchmen quickly capture old Deuteronomy and re-enter disguised as him. Soon, he is discovered; he fights the other cats, and escapes.

The cats call on a local magic cat, Mr. Mistoffelees, to help them find Old Deuteronomy. He is successful, and Old Deuteronomy settles into make the Jellicle Choice. Grizabella re-enters, and is welcomed by Old Deuteronomy, and sings the stunning and emotionally charged “Memory”. After the song, the other cats begin to accept her back into the family, and she is selected to move on to the Heaviside Layer. She ascends on a flying tire until she reaches the clouds, where she disappears.

During the first round of rehearsals, Cats the musical had no specific plot, as T.S. Eliot’s estate mandated that the creative team not write a script and use only the original poems as the text for the show. This caused many actors to be confused and unsure of what they were doing in the early stages. The final Broadway version is told completely through music and has no spoken dialogue in between musical numbers. Dance is arguably the most important aspect of the work, particularly during the Jellicle Ball, which is a ten minute dance sequence.

"Cats" the Musical opened in London’s West End in 1981. It was directed by Trevor Nunn, produced by Cameron Mackintosh and Really Useful Group, with choreography by Gillian Lynne (also the associate director). Dame Judi Dench was originally cast in the role of Grizabella, but she snapped her Achilles tendon in rehearsals before the opening, and was replaced by Elaine Paige.

Other notable performers from the original West End production of Cats the Musical include Brian Blessed, Seeta Indrani, Stephen Tate, Sarah Brightman, and Finola Hughes. It won the 1981 Laurence Olivier Award for Best New Musical and Outstanding Achievement in a Musical. 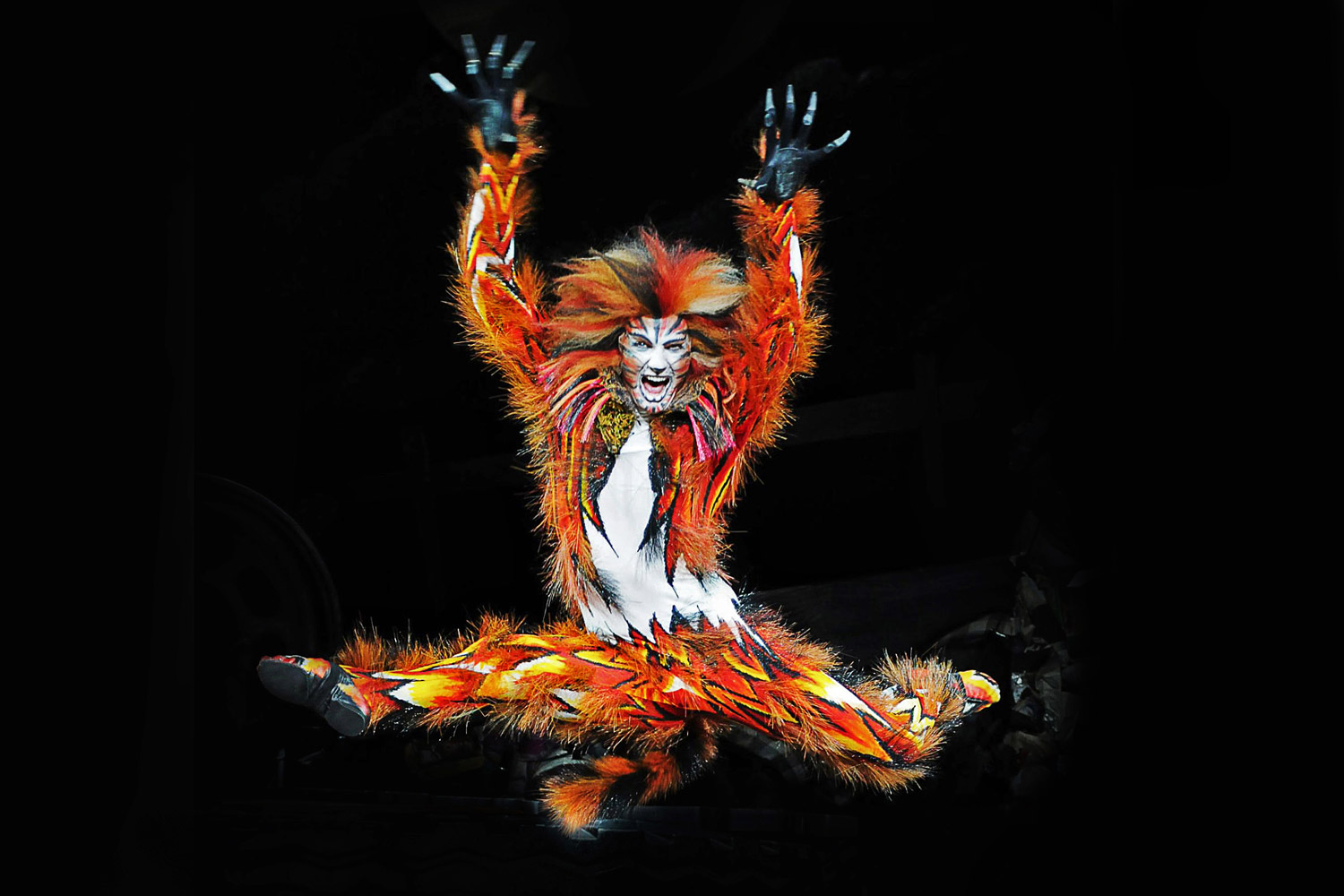 ﻿A picture from the "Cats" tour. Photo by Alessandro Pinna

"Cats" final performance on the West End was on May 11, 2002, twenty-one years and 8,949 performances after it opened. In addition to being performed on its home stage at the New London Theatre, it was broadcast on a large screen in London’s Covent Garden, so fans everywhere were able to watch. Cats the Musical held the record for London’s longest running musical until it was overtaken by Les Miserables in October of 2006.

In 1998, Andrew Lloyd Webber produced a film version of "Cats" the musical that was based on the original stage production. The video starred Elaine Paige (original Grizabella, West End), Ken Page (original Old Deuteronomy, Broadway),  Sir John Mills (Gus), Michael Gruber (Munkustrap), John Partridge (The Rum Tum Tugger) and Jo Gibb (Rumpleteazer). Many of the chorus singers and dancers were from various stage productions of the work. Recorded at the Adelphi Theatre in London, it was broadcast all over the world and subsequently released on DVD and VHS. It was filmed so that the audience would feel as if they were seeing it on the stage - all camera views were facing the stage, with added close ups to draw the viewer in and make it an extremely personal theatrical experience.

"Cats" the musical was revived on the West End in December of 2014. It was originally planned to run for 12 weeks at the London Palladium, with much of the original creative team returning. The run was later extended through April of 2015. Nicole Scherzinger, former member of The Pussycat Dolls, was cast as Grizabella.

"Cats" Broadway was most recently revived in July of 2016. Nicole Scherzinger had originally agreed to reprise her role as Grizabella, but because of scheduling for The X Factor, where she is a judge, she was replaced with Leona Lewis (herself a former X Factor winner). Mamie Parris took over the role in October of 2016. This revival features choreography by Andy Blankenbuehler (who also choreographed the smash hit "Hamilton"), influenced by original choreographer Gillian Lynne.

"Cats" the Musical has been performed all over the world! Productions have been staged in Budapest, Vienna, Sydney, Los Angeles, Mexico City, Madrid, Warsaw, and South Korea, to name a few. It is the fourth longest running show on Broadway, and has been experienced by millions - don’t miss your chance to join in the fun!

Have you seen "Cats" the musical? Seen it on Broadway? Let us know in the comments below!