“Come From Away” Inspires a Life-Changing Trip

How the musical brought two strangers together, inspiring a new friendship and a personal journey to Gander. 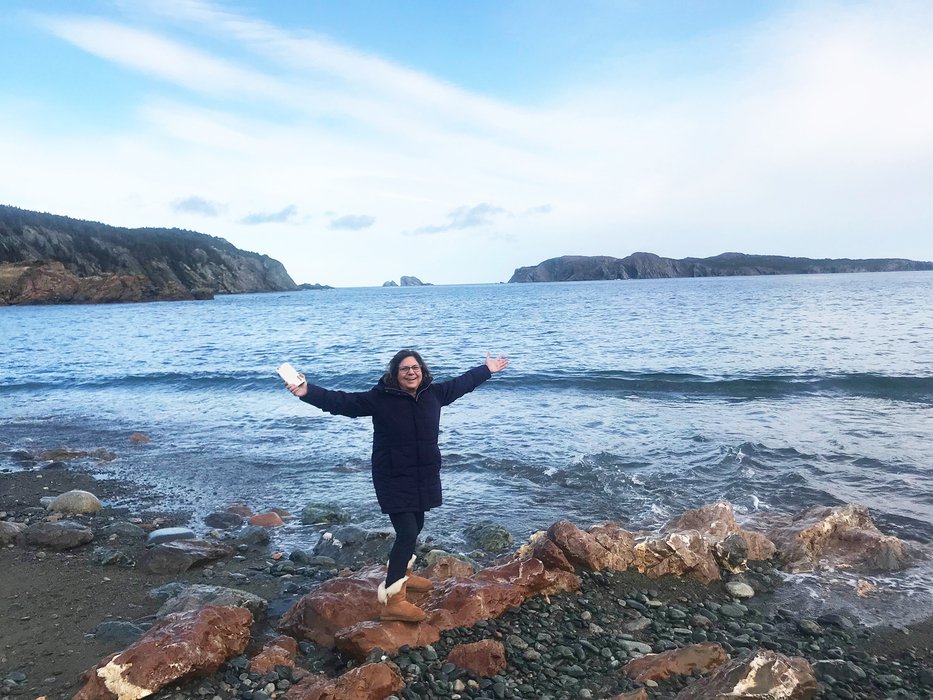 “I’ve never been a groupie before,” sixty-eight year-old Barbara Pearson confesses with something like impish surprise. The Queens native who works in pharmaceutical advertising is marvelling at the way her life has become entwined with the Broadway musical "Come From Away." The show is about the small Canadian community of Gander, Newfoundland and Labrador who were suddenly hosting 7,000 stranded and rerouted travelers in the wake of the September 11th attacks. It’s the show’s sense of community -- a word Barbara invokes again and again in conversation -- that most inspired her.

Most fans are content to applaud and then return home with only their playbill as a souvenir. Not Barbara.

She hasn’t just recommended the show to friends, Barbara has also flown to Gander itself to experience what she felt on Broadway in an entirely different way. She kept thinking of the real people who inspired the musical. “After I saw it the second time I had to go to Gander.” 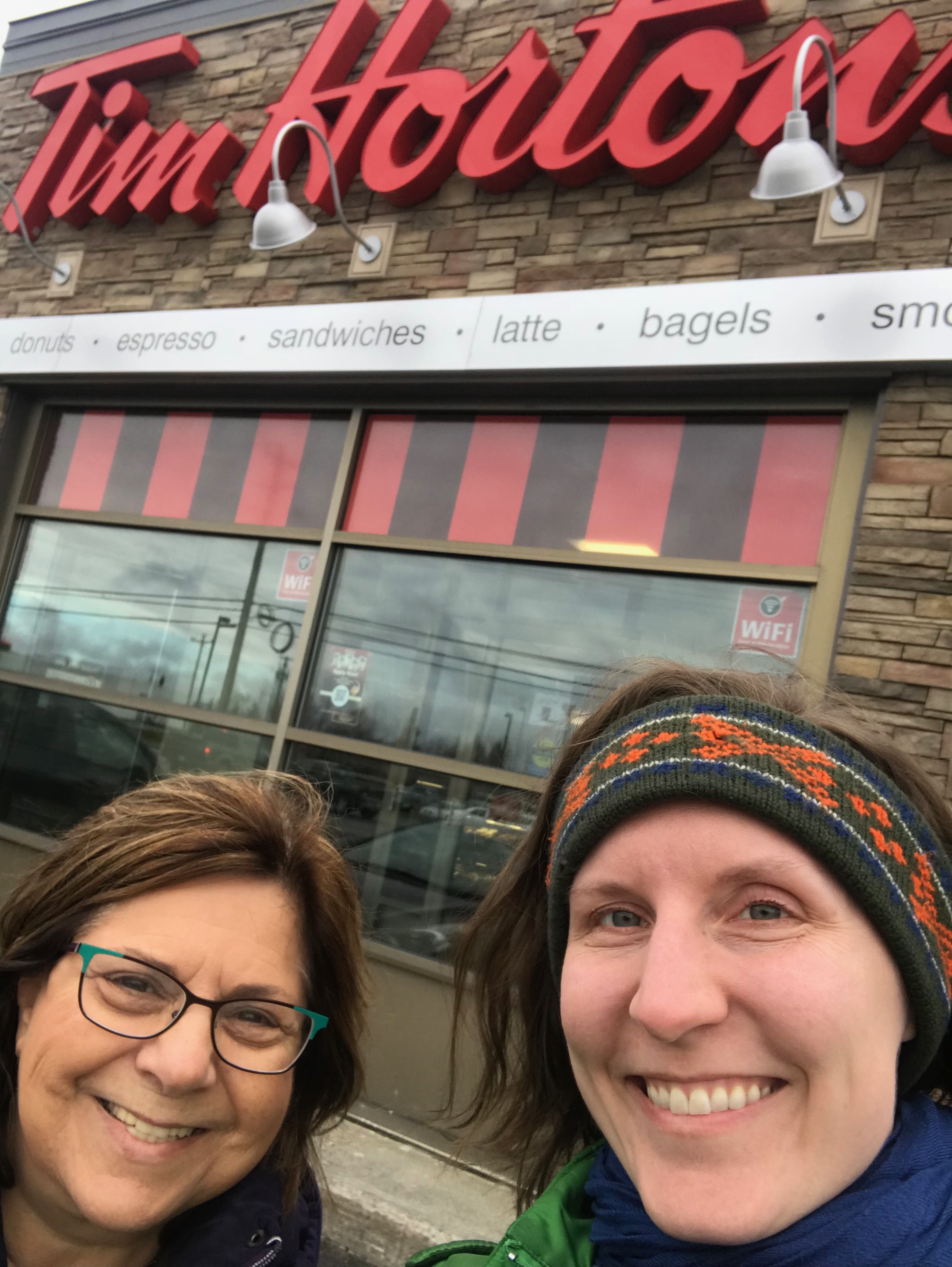 Which brings us to Jenni Swan, a New Yorker transplanted here some years ago from Wisconsin. Thirty-four years separate these women but the show (which they’ve seen fourteen times between them) and Show-Score, in point of fact, brought them together as unlikely friends.

“I can’t imagine our paths would have crossed without it,” Jenni says of the Show-Score ”Making of Come From Away” salon that they both attended. Though they didn’t speak during the event, Jenni approached Barbara on the sidewalk afterwards, impressed by something Barbara had said at the salon.

Surprising both of them, Barbara invited her to come along with her to Gander.

“I invited a complete stranger to travel with me,” Barbara recalls with shock, turning the story around in her head for clues as to her own behavior. “Who does that?!?”

“She was the nudge,” Jenni states matter-of-factly, confident that without Barbara’s plan she probably never would have seen the real place.  Jenni and Barbara say each others names frequently now with an easy travel-buddies rapport. They’re like a cross between friends who share a highly specific fandom, and a pseudo mother/daughter act with Barbara offering to adopt Jenni, while they’re telling their Gander stories. 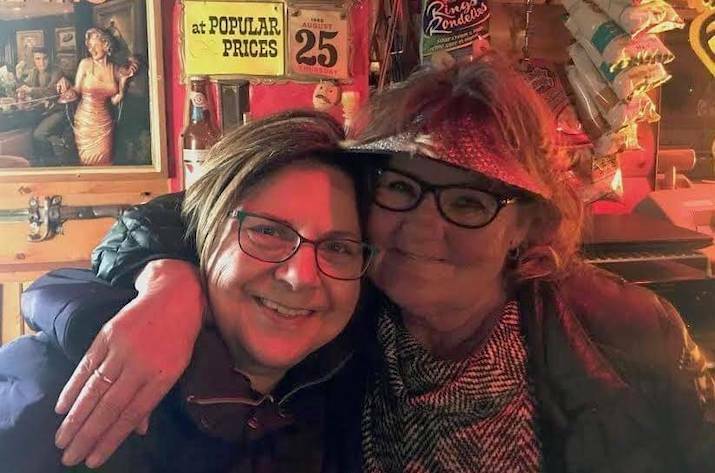 When anecdotes from the trip begin there’s an avalanche of other names, too, all intoned with the affection normally granted dear friends: Matthew, Diane, Jeremy, Maxine, Kim, Barb, etcetera.

The duo were especially stunned to meet the real Beulah (a character in Come From Away) on their trip  “I wish I had a camera on Jenni’s face,” Barbara says laughing, remembering her new friend’s excitement when she realized the real Beulah was on her way. Beulah dropped everything to join them for lunch a mere ten minutes after a quick request from another local.

One of their loveliest stories is about Margie and Dave, who hosted seven people in their home during the 9/11 event that inspired the musical. They fed Jenni and Barbara an unusually impromptu “Jig’s Dinner” (a massive feast popular in Gander) that they had missed the night before. When they were done eating, the remaining food was wrapped up to take to other people in town.

The anecdotes and stories all have common threads: unbelievably gracious people, a sense of community, and generosity to strangers. Musicals are rarely accused of realism but "Come From Away" might not be too far off in the way it portrays the people of Newfoundland. “The people are definitely as advertised,” Jenni promises. 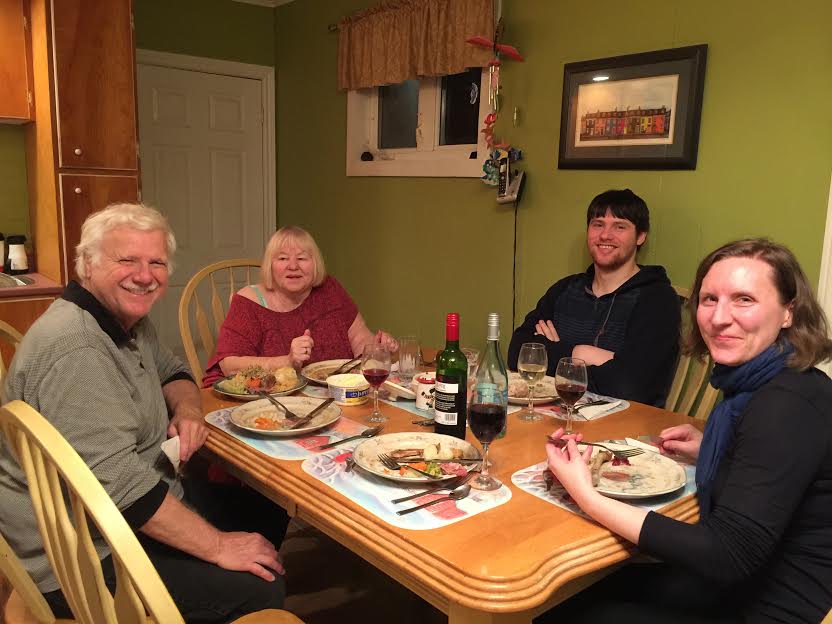 Jenni at "Jig's Dinner" hosted by locals Margie and Dave

Jenni and Barbara turned out to be even better travel companions than they initially expected, both independent but social with a shared love of jamming out to one hit wonder 1960s songs as they drove.

But what was it exactly that convinced them to take this impromptu journey in the first place? These answers are quieter, free of the missionary zeal that you can hear in “Ohhhh, you must see this!” discussions of the musical itself. The answers are somewhere deeper, more spiritual. For Barbara it was a dark personal moment following the 2016 election. “I was despondent and hopeless. I came to Gander to meet people that might relight something that was dying inside of me.”

“Are these people are really like that?” she found herself wondering during her soul searching.  “I needed them to be.”

Whatever these new friends were searching for, they found. The sense of community that "Come From Away" gave them is something they’re both eager to share, whether in further salons or elsewhere. “That piece is what brought us into the same room. It’s what put us on the same sidewalk. I invited a complete stranger to travel to another country with me because of this show!”

The trip had a similarly profound effect. 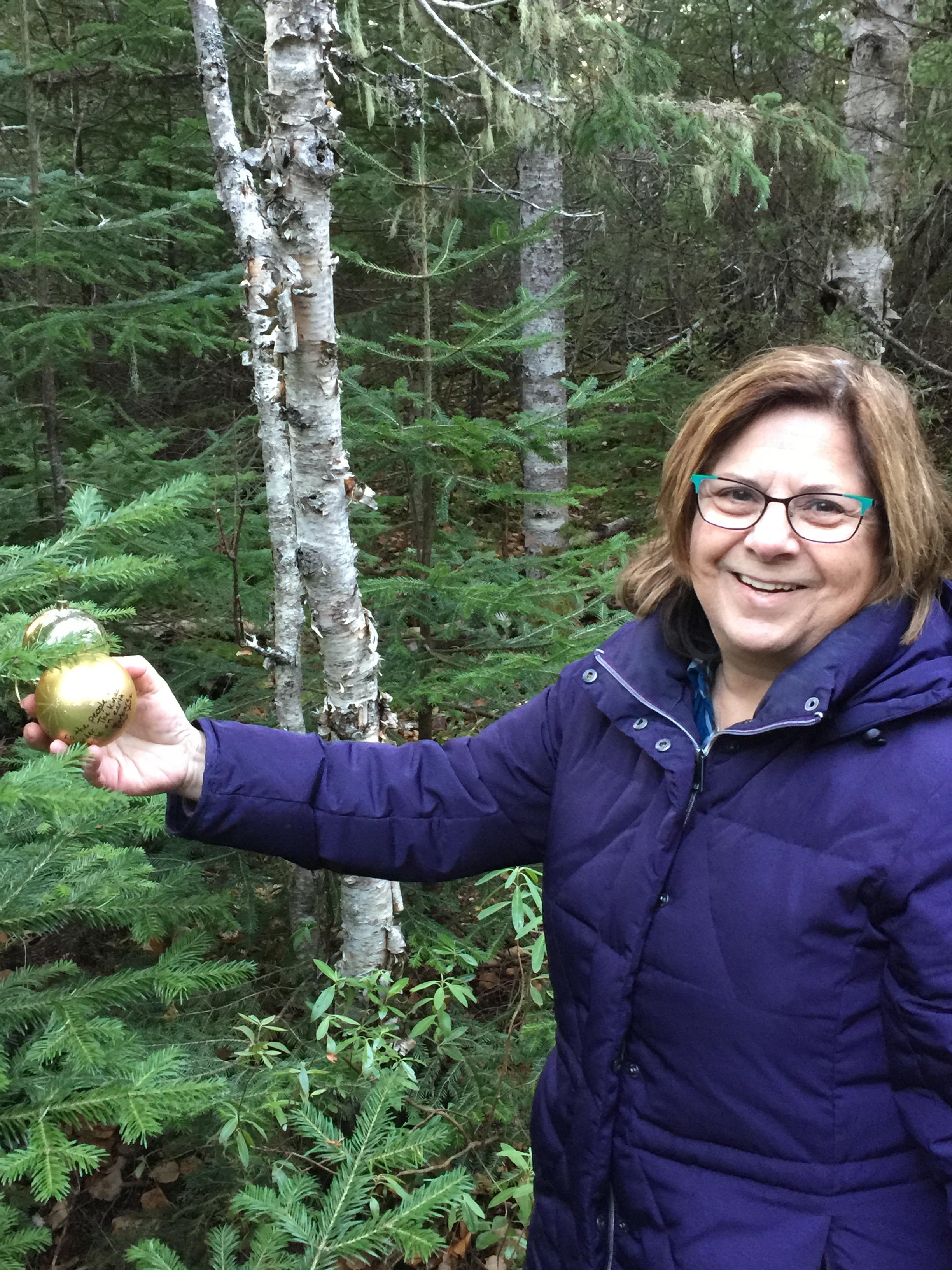 “Barbara’s face changed,” Jenni recounts with wonder. “It’s so hard to describe but you could see it visually. It filled something in her. The more people she connected with the more she changed. She found her tribe.”

It may be hard to articulate but it feels right in the telling. Her older friend’s face confirms the truth of it. The memory of Gander all but glides wistfully across Barbara’s face whenever she talks about it.

But then the come-down from the high…

Amusingly both women revert to more typical New Yorker gripes about their too-short vacations at this point in their story. They dramatically bemoan the short shelf life of those blissful vacation effects. How do you keep that with you in the city? But protestations aside, their Gander memories will obviously warm them in the future, even though Newfoundland is quite a brisk vacation spot in the off-season months. 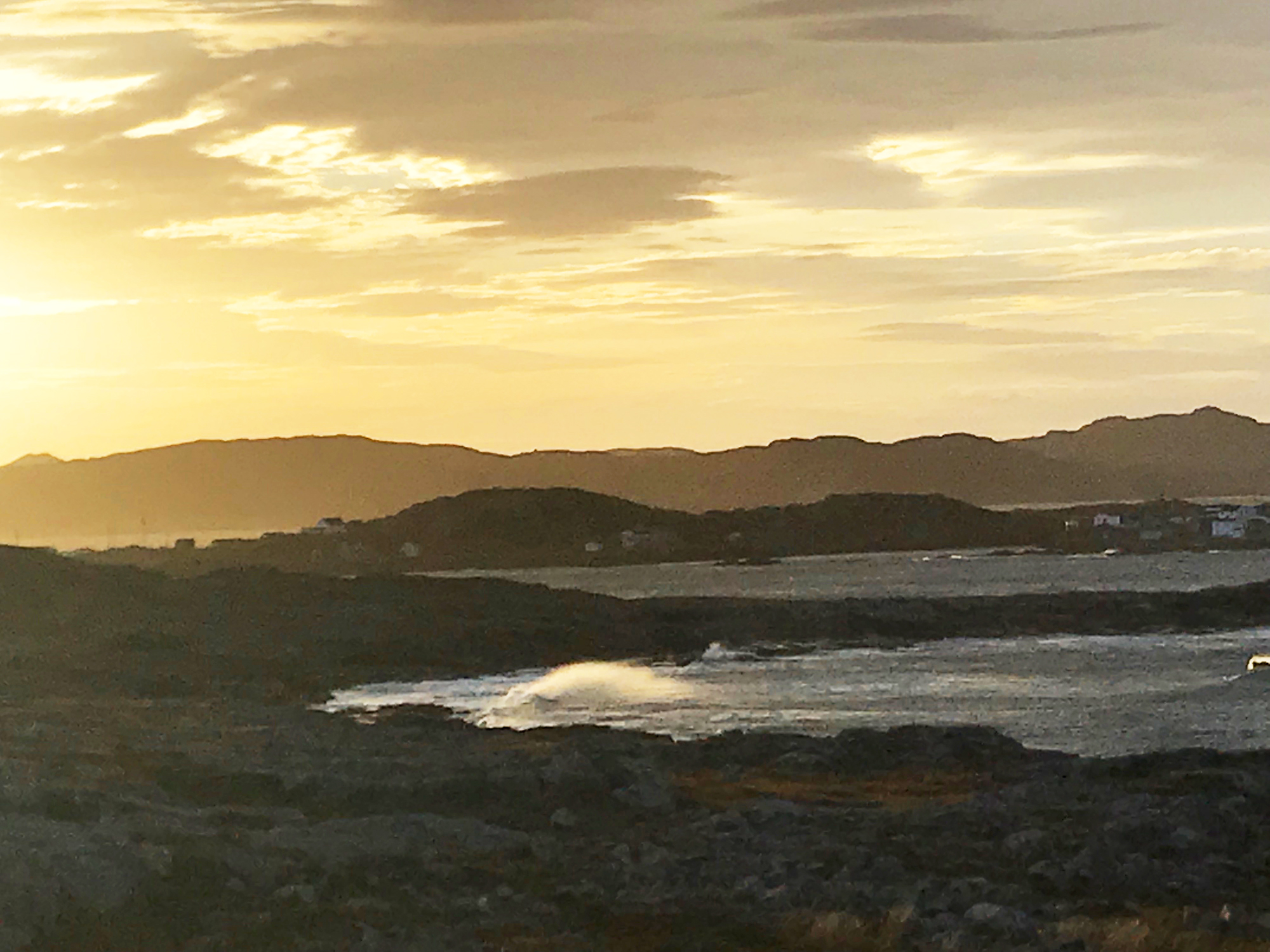 Jenni plans to see the show again “I’d see it every week if I could” but Barbara is now hooked on the real thing. She isn’t waiting around to be nostalgic about the first trip. She’s taken her new friend Beulah’s mantra to heart. She repeats this in conversation to make sure you’re taking it in, too.

“You enjoy today. You look forward to tomorrow. And that’s all there is.”

This inspired and now inspiring woman from Queens is ready for more. She’s already planning not one but two return trips to that magical place she first encountered on the stage. A ‘Return from Away’ to Gander again, another reunion with her long lost tribe.

Did you love Come From Away?
Score it and help other theatre fans discover shows they'll love!