Tony nominee Brandon Uranowitz (“An American in Paris,” “Baby It’s You”) shares pictures from his childhood to demonstrate how the themes of his latest show, "Falsettos", resonate with him personally and professionally. 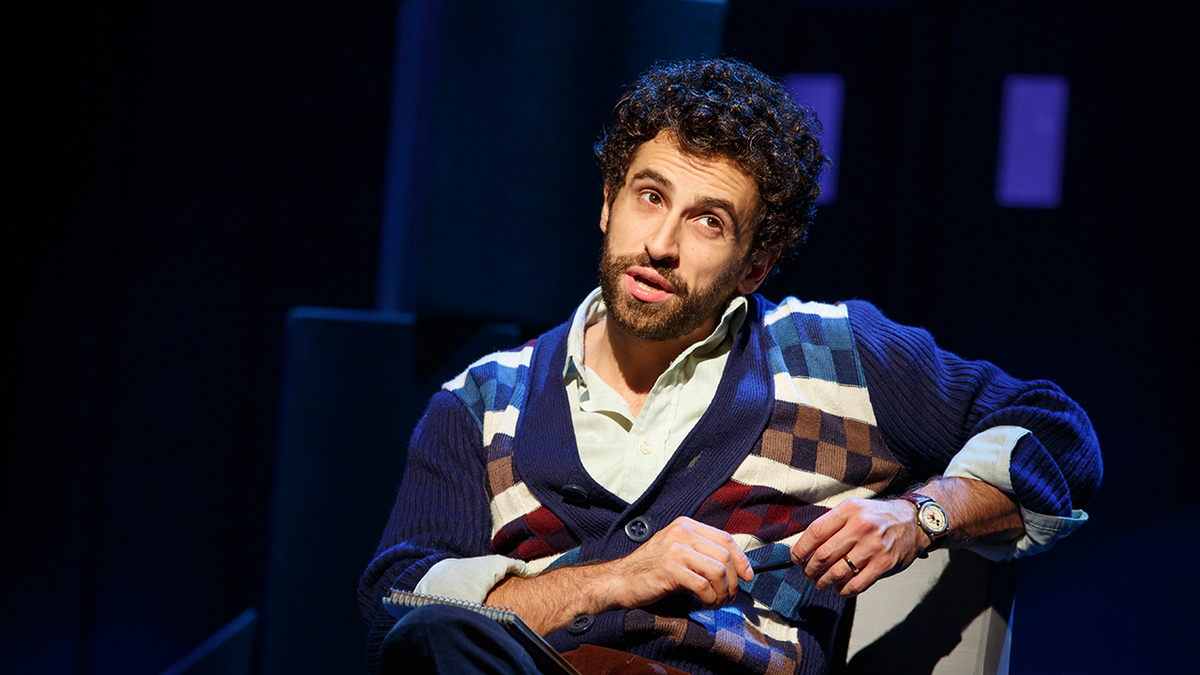 Brandon Uranowitz in "Falsettos" at the Walter Kerr Theatre | By Joan Marcus
With a current ShowScore of 83, "Falsettos" is a show that resonates with many...and it's not hard to understand why. The William Finn and James Lapine musical centers around the universal themes of family and love: even if the cast of characters are anything but conventional!
Among those who relate most to this show include current revival star Brandon Uranowitz who plays Mendel, the neurotic therapist caught in the middle of things. Uranowitz is Jewish—something he has in common with his character—as well as gay, and even planned on becoming a psychiatrist before booking his last Broadway role.
With all that in mind, we caught up with Brandon to find out how "Falsettos"'s themes resonate with him both personally and professionally.

(Brandon Uranowitz and the cast of "Falsettos" 2016 // photo by Joan Marcus)
What was it like planning to become a psychiatrist and then getting the call that you were cast in “An American in Paris”? How does that personal experience come to life in your portrayal of Mendel?
Uranowitz: I've struggled with the idea that being a performer can sometimes feel inherently indulgent and selfish. During long bouts of unemployment early on in my career, I constantly found myself wanting to help others, which seemed to go hand-in-hand with my longtime fascination with psychology.
Doing both “An American in Paris” and “Falsettos,” however, has shown me just how much theater can change, help, and heal people—it's a very powerful thing that I'm very proud and lucky to do every night.

(Brandon: "Me with Max Von Essen and Robbie Fairchild during the developmental lab of 'An American in Paris'")
Do you identify with the themes of Judaism in “Falsettos”? Does it make you reflect on life as a child, growing up Jewish [like the character of Jason, Marvin’s son]?
Every night when we get to the Bar Mitzvah scene in “Falsettos” I almost always flash back to my own Bar Mitzvah. And despite my own struggles with faith, I do have fond memories of that time in my life and feeling in that moment like I was becoming a man.

(Brandon: "Me looking extra Jewish at my Bar Mitzvah")
Do you think the show stereotypes Jewish people in any way? Or does it just bring out common, relatable threads, as many cultures could be depicted as lovingly “neurotic”?
No, I don't think “Falsettos” stereotypes Jewish people, nor do I think it's necessarily a "loving" portrayal; I think it's simply truthful and authentic.
Like me, both Bill [William] Finn and James Lapine grew up in Jewish families, and while “Falsettos” does present Jewish people in a "heightened" reality, I find the emotional core of each other these characters completely relatable and honest: their fears, their desires, their wit, their neuroses, and their enormous hearts are all qualities of the people I grew up with.

(Brandon: "Thanksgiving 2015 at my parents' house—my mom on the left—with family and some cast members from 'An American in Paris'")
As a gay man, do you identify with the non-traditional family structures in "Falsettos" and the challenge of working towards "normalcy"?
Uranowitz: It's so wonderful to be telling the “Falsettos” story in 2016, at a time when the notions of "family" and "normalcy" are shifting so dramatically. Thankfully, children today won't know first-hand just how taboo and "abnormal" it was to try and create a family as gay parents. Which is a beautiful thing.
But, I think it's extremely important, as a history lesson of sorts, that we remind this generation what the struggle was like. A struggle I can absolutely relate to, having grown up in a fairly conservative town and school, with its fair share of bullies.
“Falsettos” runs through January 8th at the Walter Kerr Theater (219 West 48th Street). Click here for more information.
Previous
Next