How to Create Halloween Costumes Based on Musical Theatre Characters

How to create Halloween costumes based on musical theatre characters 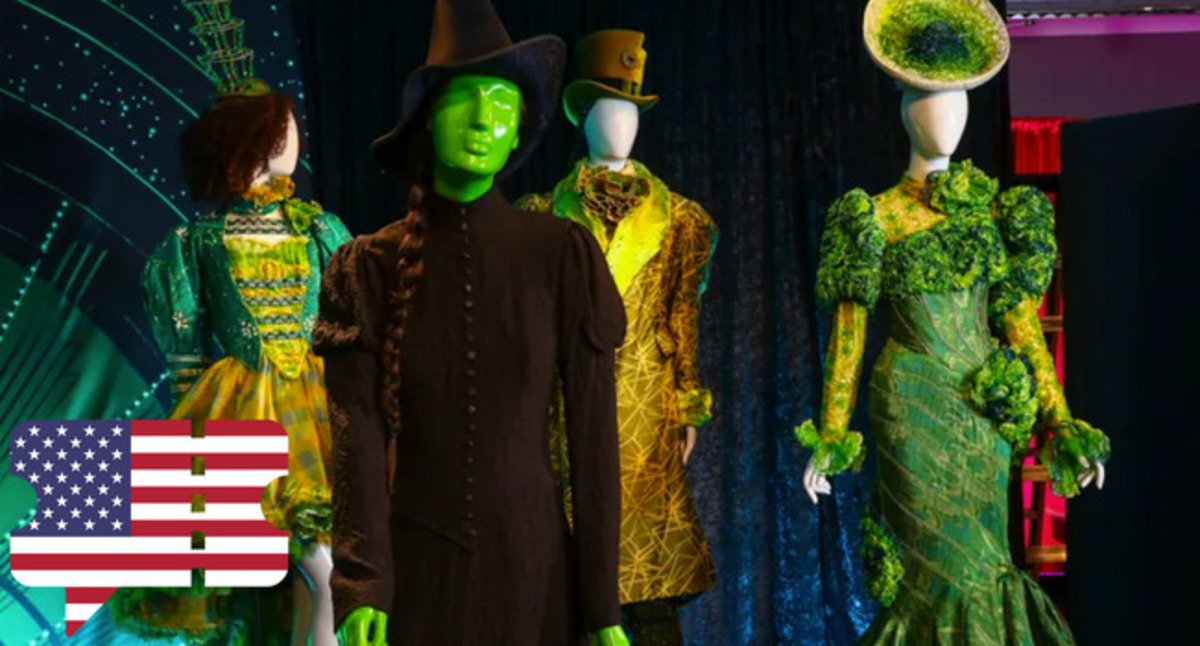 By The Seattle Times

Feeling uninspired about your potential Halloween outfits this year? Take a trip down the West End and Broadway for your next style fix. Anyone can pull off these theatrically inspired looks, ranging from simple outfits to intricate ensembles that will make heads turn, even if your party is on Zoom.

Our Halloween costume ideas are a surefire way of dressing like a sensation this spooky season. So, fix up, look sharp, and get your gladrags on to celebrate the occasion.

A Waitress Halloween costume is never a bad idea — and what's more, it's simple. Grab a blue dress and an apron, and that's all you need to look like Jenna, Dawn, and Becky at the diner. If you want to be more character-specific, add glasses and a bow to become Dawn, or carry around a whisk, mixing bowl (perfect for holding candy), or a pie to be Jenna. You can also go an entirely different route by donning a blue shirt, tie, and white lab coat to dress up as Dr. Pomatter.

Get Waitress tickets on TodayTix in New York.

Step back to a time where the hair was short and the skirts were even shorter. If you want to show off your figure and slip on your dancing shoes, The Great Gatsby is the show for you. For a bold Gatsby-inspired fashion statement, go for a sparkly number or a sharp suit. For the ladies, you’ll want a dress with a dropped waist and dripping in tassels. For your suits, a crisp, colorful jacket is the perfect nod to Jay Gatsby himself. It’s one of the glitzier Halloween costumes you could have, but you’ll definitely feel like a million bucks.

Get The Great Gatsby tickets on TodayTix in London.

Feel like an ABBA-Grecian god with a Mamma Mia! inspired look. By day, it’s all about flowy clothing that will blow in the island breezes; kaftans and palazzo pants are real winners here. By night, channel your inner Donna and the Diamonds by wearing a pair of ruffled trousers. The bigger, the better.

Get Mamma Mia! tickets on TodayTix in London.

The Book of Mormon

Master The Book of Mormon fashion with these simple steps. Pair a crisp, white shirt that’s freshly ironed with smart black trousers and polished black shoes. Slick your hair down so there’s no hair standing on end. For the finishing touch, tie a black tie and you’ll be dressing just like Elder Price and Elder Cunningham.

Get tickets to The Book of Mormon on TodayTix in New York.

Raid your grandma's closet for this one. To get the look of the elderly British nanny, find a patterned blouse, long dress, and apron — they don't all have to match — and pair them with the most sensible shoes you own. You're already one step ahead if you wear glasses. All that's left is to add heavy pink blush and lipstick, grab a feather duster or a broom, and now you're a nanny, poppet!

Get Mrs. Doubtfire tickets on TodayTix in New York.

To achieve the Chicago look, black is mandatory. For an authentic outfit, you’ll want to wear a black leotard — the more cut-out pieces the better. Obviously, you can cover up if you feel more comfortable, but you can make the outfit come alive with a sexy reveal too. Pair the leotard with black fishnet thighs, a thin, black heel, and a classic red lip, and you’ll be part of the six merry murderesses in no time.

Get Chicago tickets on TodayTix in New York.

Harry Potter and the Cursed Child

There's no shortage of costume options to be found in the Wizarding World. You can stick with the basics and don a shirt, tie, and black robe to be a Hogwarts student, paired with whatever accessories you have in your house colors. If you have a formal black suit, you can be Draco Malfoy as pictured above, or grab a hoodie and flannel button-down to become Ron. Transfigure into Harry Potter by drawing a lightning scar on your forehead and donning circular glasses — you'll be recognizable no matter what outfit you're in. And of course, a wand — whether bought from a Harry Potter merch shop or fashioned from a stick in your yard — ties any magical outfit together.

To Kill a Mockingbird

Scout Finch's Halloween costume — a ham — is an iconic part of To Kill a Mockingbird that features in the book, the film (pictured at right), and the Broadway play. If you're crafty, you can create a ham costume of your own with cardboard and paint. If you don't want to ham it up all that much, you can dress as an everyday Scout with a short-sleeved button-down shirt and denim overalls.

Get To Kill a Mockingbird tickets on TodayTix in New York.

The Phantom of the Opera

We all know the Phantom. He’s a mysterious figure usually dressed with a long, black cape around him to help cover up his identity. To perfect this look on a day-to-day basis, a black trench coat or mac will work all the right angles. For Christine’s pure and heavenly essence, any white dress will capture her innocence. To maximise The Phantom of the Opera look, go for a dress with ruffles. Just don’t forget your operatic mask.

Get The Phantom of the Opera tickets on TodayTix in New York.

Your Halloween costume will be simply the best if you dress up as Tina Turner. Sparkle and pizzazz are the name of the game: Don your shiniest, sparkliest dress and heels to imitate the rock 'n' roll icon. Bonus if it has fringe that shimmies with you when you dance. However, since Turner is best known for her hairstyles, especially her spiky 80s 'do pictured above, that's what will make your ensemble really stand out. If you have long hair, you can tease it to make it Turner-sized, or you can find a similar wig at your nearest costume or party shop.

Get Tina: The Tina Turner Musical tickets on TodayTix in London.

A teenage boy’s wardrobe isn’t that exciting, so it’s the perfect character to recreate if you’re on a budget. For the best Evan look, pair a set of light brown chinos, jeans, or smart trousers with a casual blue striped top. That’s it, really. Well, Evan does have a broken arm — but we don’t expect you to go the full distance.

Get Dear Evan Hansen tickets on TodayTix in New York.

Take inspiration from these two Wicked witches for a haunting Halloween outfit. To be Elphaba, all you’ll need is a long, black dress and green face paint on your face. For the right shade, use MAC Chromacake in Landscape Green — it’s the shade hair and makeup teams use on Elphaba in the West End and on Broadway. Want to be Glinda? We recommend any any pastel-colored dress (though pink is Glinda's signature) that’s light and airy, with a bubble wand for an accessory. You can even add a tiara if you have one!

Enter a whole new world of Halloween costume craziness by being the Genie. You don’t need three wishes to get this outfit together; all you need is a blue tracksuit and plenty of sparkles. The more sparkles you have, the better it’ll be.

Get Aladdin tickets on TodayTix in New York.

If you’re gathering in a group of six this Halloween, Six should be your musical muse. To perfect your desired queen’s look, stick to a black or dark-colored base and black fishnet tights. Find a stomping pair of black boots and add some sequins or rhinestones on them so they glisten in the moonlight. Then, run wild with your color of choice. Whether you go bright pink like Katherine Howard, demure in white like Jane Seymour, or rockin’ in red like Anne of Cleves, customize your outfit however you want and be your own queen!

Get tickets to Six on TodayTix in London.

Sadly, making a replica black-and-white striped suit to rival Beetlejuice’s isn’t as straightforward as saying his name three times. The simplest way to achieve this look is vandalizing customizing a black suit with white tape or vice versa. If not, you can sew panels of white material onto a suit jacket and trousers, or just wear a black and white stripy top instead. Achieve the green hair with a spray can containing green dye, or go the full hog and dye it. You’ll definitely spook your neighbors. If you're dressing up with a friend, one of you can grab a black dress, fishnet tights, combat boots, and dark makeup for an easy Lydia look.

Halloween may not be on a Wednesday most years, but that’s no excuse for not wearing pink. To achieve a style that Regina George herself would be jealous of, layer pink on pink on pink. Alternate the shades so there’s no color clash, but that’s all there is to it. Or, choose one of the outfits referenced in “Sexy” sung by Karen: corn, Quint from Jaws, Eleanor Roosevelt, Rosa Parks, a pirate, a ballet dancer, or a doctor.

Get Mean Girls tickets on TodayTix in Washington, D.C.

Dress up with your friends as a clowder of cats for Halloween. For this look, start off with either a unitard or leggings and a t-shirt in nude colors; brown, grey, white, and black will work best. If you have any faux fur that’s comfortable to move in, wear this on top for kitty cat perfection. It’s up to you if you want to do any face paint, but definitely draw a couple of whiskers on with liquid eyeliner and you’ll be feline fine.