Love Chekhov? Come party and chat with us!

On Saturday April 8th in mid-town, join a really fun celebration of all things Chekhov. 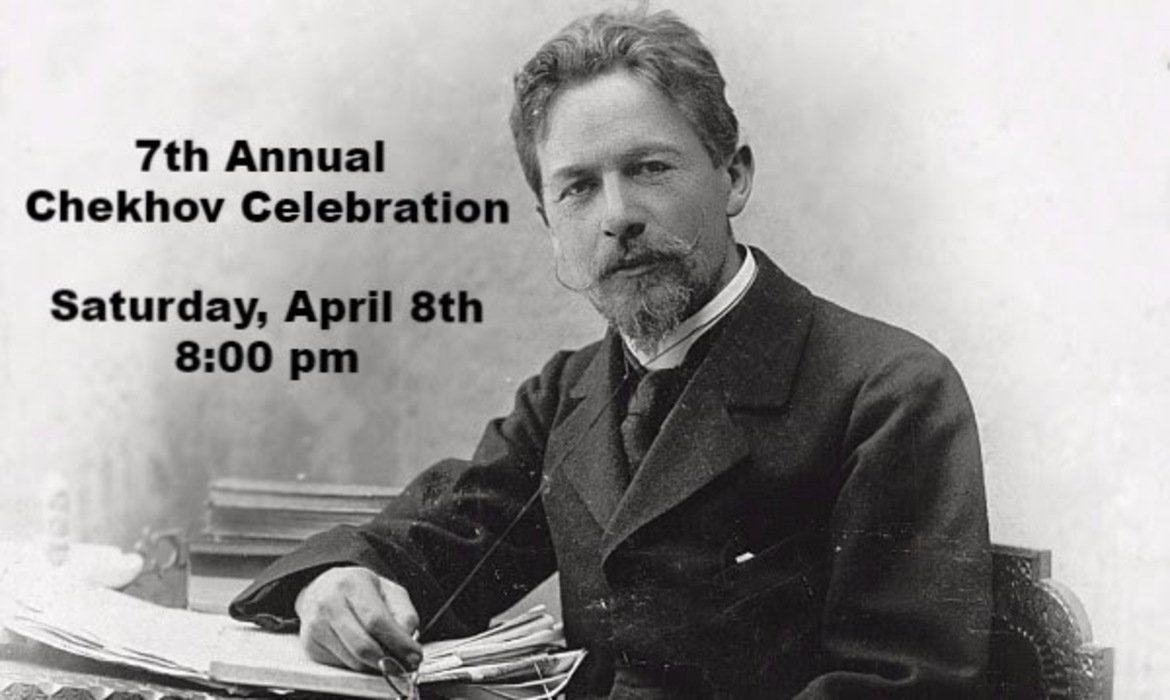 For the last 6 years, there's been an underground Chekhov party with stars, music, drinks and laughter and we just got the invite. Come join us, Saturday, April 8th at the 7th annual Chekhov Celebration sponsored by Columbia University’s Harriman Institute and hosted by Harriman’s Visiting Chekhov Scholar Laura Strausfeld.

If you can't make the party, join Laura's new Facebook Group, The Chekhov Channel for more events, discussions and news about this monumental  playwright!

We say down with event organizer and Chekhov scholar Laura Strausfeld to learn more about this amazing event!

What is this event?  Is it academic?  A performance?  A party?

Laura: It’s a celebration – a birthday party, actually – for Anton Chekhov. It is not academic. There are performances of Chekhov’s really funny early stories that I’ve adapted for the stage. There’s Russian music, vodka, pirozhki’s (Russian pastries), dancing and a lot of laughing and comments like, “I had no idea Chekhov was such a card.”

How did you come up with the idea?

Laura: 2010 was the 150th anniversary of Chekhov’s birth. I remember wanting to celebrate – because I’m a huge Chekhov fan – and expecting to find listings for lots of events. I found nothing. Not one listing for any public celebration. So I quickly organized what I called a Chekhov vodka-dance party and it was great. Many people who attended encouraged me to do it again the following year, so I did. I remember expecting – naively – that this idea of celebrating your favorite author would take off, and I’d start getting invites to the annual George Elliot or Virginia Woolf celebration, and that it would become, like, a thing. Sadly, it didn’t. But every year I kept making another Chekhov party. In 2015, Columbia University’s Harriman Institute began sponsoring the event, which was terrific for a variety of reasons. They help pay for it, but even better than that, they’re an amazing group of Chekhov-lovers and scholars and Russian-speakers. The event’s become more diverse and hard-core and is building its bona fides with people who have spent years studying Chekhov. I’m not permitted to bill it anymore as a blowout vodka-dance party, because that’s not something an august institution like Columbia supports. But the event is still really the kind of irreverent celebration Chekhov might’ve appreciated.

Will someone who doesn't know much about Chekhov enjoy it?

Laura: The people who often have the most fun are the people who show up knowing nothing about Chekhov. For the past several years, we’ve had Sam Underwood perform a couple of really funny Chekhov stories – and I mean side-splittingly funny material. Chekhov got his start writing for comedy magazines and with the help of some good translations I’ve found, the material really delivers. Then last year Valorie Curry, whose comic timing is a brilliant as Sam’s, joined in and their performances brought down the house. This year we’ve got some new acts that I’m hugely excited about. There will be a political dimension to the programming, of course, because Chekhov was subversive and you can’t gather people these days without offering something useful, constructive and hopeful.

What do you hope for the event this year and how will it be different from recent years?

Laura: My goal this year is to involve as many serious Chekhov fans as possible, including as performers and participants. If any Chekhovphiles are reading this and want to become involved, I encourage (beg!) them to contact me. We have an extraordinary poet, Alissa Quart, writing some original poetry that was inspired by Chekhov’s non-fiction about Russia’s penal colony on Sakhalin Island. Her poetry will be performed and there will be a performance of Bob Dylan’s “Simple Twist of Fate,” which was inspired by Chekhov’s story, “Lady with a Dog.” I’ve asked a number of song-writing friends to write and perform original songs inspired by Chekhov and am really excited to hear what they come up with.

Most of all, I hope more people come and have a great time and go home inspired by the beauty, heroism and comedy of this great humanist born 157 years ago.