Postcards From The Fringe: Part 1

Show-Score | By Suzanne Zuckerman | Aug 24, 2017
Show-Score goes international with a report from the Edinburgh Fringe Festival. 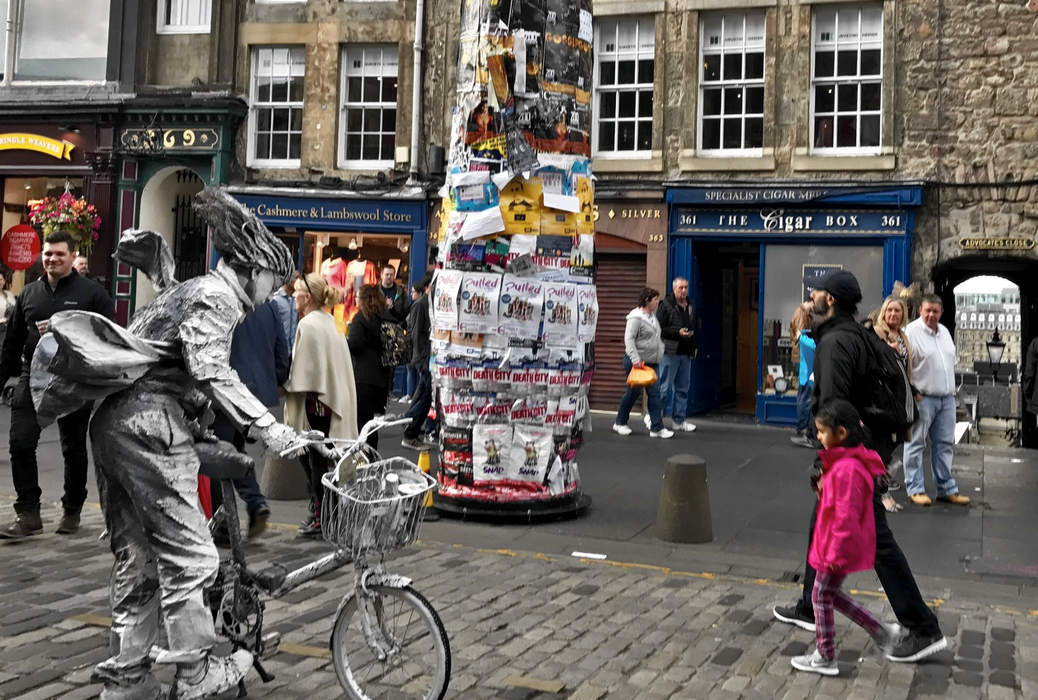 Arriving in Edinburgh in tangle of raincoat, scarf, shoulder bags, and roller case, I am astounded not by this fairytale city—with its castle and rough, stone-walled buildings that were centuries old before our Revolutionary War—but by the billboards that hang on every wall, fence, and public bus to advertise the more than 5,000 events during the 24 days of the Edinburgh Fringe.

In April, when I heard the New York Fringe had been canceled, it occurred to me this might be the year to finally try the 70-year-old original Fringe Festival. It’s the grand-dame of its kind, offering the largest and most wonderfully varied selection of entertainment in the world.

The public wallpapering of posters promotes everything from "Austentatious, the Improvised Lost Works" to "Zipping Rock", a Samurai drum concert. Themes suggested by their dramatic images conjure odd memories: a lost dog, music by a songwriter I have not heard in 20 years, even learning to tie my shoelaces. It’s as if everything that has ever happened in my life is suddenly present in my mind. I am delightfully dizzy with it.

Travel websites informed me the city was 78% booked for August, but I found a single room in a hostel that appeared to be near the center of town. Now that I’m here, I realize it is actually a 45-minute walk from my narrow bed to the madness that is the Royal Mile. Once there, I find costumed performers handing out cards inviting the public to their shows, and I see mini-stages offering tastes of music, magic, acrobatics, and activities I cannot name. Almost every doorway is adorned with an orange venue banner and a list of the productions being staged there.

My accommodation is on a tiny commercial street between a park full of circus tents and a road of McMansions leading to a cemetery. Across the way, a pub has half-cleared its basement storeroom to install a tiny stage (known during the festival as venue 293) that offers free stand-up every night. The late-night patrons stand in the street under my window reviewing the jokes. This becomes less amusing as the hour gets later.

Having spent five obsessive days in June practically living on edfringe.com and charting my choices, I’m surprised to encounter a large English family at breakfast poring over the half-inch thick newsprint catalog to reach consensus on their daily shared event. Meanwhile, the twenty-somethings assure me it is a waste of good beer money to buy tickets with so much available free entertainment

But no matter how we come to it, all of us theater pilgrims know that the magic of Edinburgh Fringe is intoxicating.

Have you been to the Edinburgh Fringe? Share your stories in the comments!

And if you haven't updated your Wishlist recently, why not take a moment to do it now?