REVIEW ROUNDUP: “Jerry Springer – The Opera” Opened with a ShowScore of 78 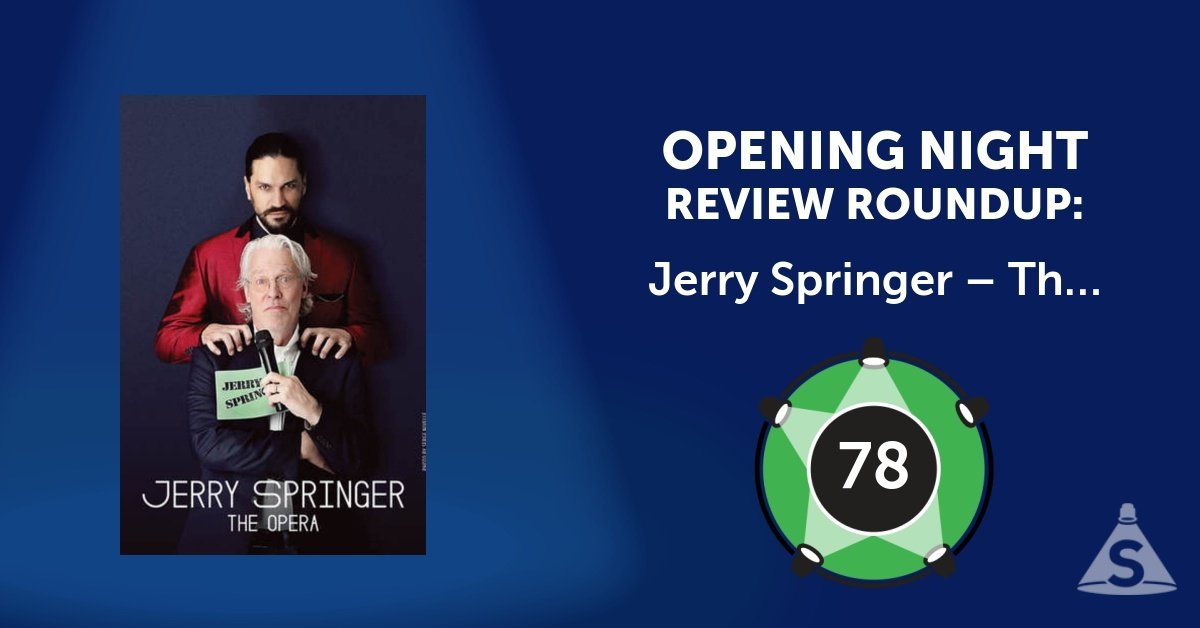 11 critics reviewed the show, resulting in a weighted average of 70.

Ben Brantley
The New York Times
ShowScore: 90
"Now that it’s here, it soars like never before, in a New Group production that fully finds the compassion within this singular show’s surface satire...Immaculately directed by John Rando and sung with incandescence by its 17-member cast...'Jerry Springer' now reveals itself to be a work of stirring prophecy, a hilarious and unexpectedly touching origin portrait of how we became who we are today...The pure, pulsing beauty of Mr. Thomas’s score hooks us subliminally."
Adam Feldman
Time Out New York
ShowScore: 85
"Exuberant high-low extravaganza...Under John Rando’s direction, the energy never flags, and the intimate thrust-stage set-up sucks you into the talk-show–audience mob even as it helps you appreciate their glorious voices. Its theology may not be deep, but beneath its sublime-to-ridiculous jokes, 'Jerry Springer—The Opera' is onto something about reality-show culture and the poignancy behind its debased participants—which more or less includes all of us now."
Frank Scheck
The Hollywood Reporter
ShowScore: 60
"Succeeds in its aspirations — up to a point. But the one-joke nature of the proceedings starts to wear thin even before intermission. And it's pretty much all downhill from there...Not surprisingly, the musical feels more than a little dated...While the audacity of the proceedings proves amusing for a while, the satirical humor never goes anywhere interesting or emotionally resonant...John Rando's small-scale staging proves inventive at times...The performers, however, are terrific."

The show was also reviewed by 104 Show-Score members, whose collective ShowScore is a weighted average of 79.

MJK, ShowScore: 73
See it if… "You want a clever take on the depravity of the Springer show (Act I) that devolves into a silly, 3rd rate existentialist dream (Act II)."
Don't see it if…"You aren't familiar with the JS Show; you expect profound 'final thoughts' on the host, guests or the show's inexplicable phenomenon."
Linda 22, ShowScore: 85
See it if…"To see Terrence Mann, Will Swenson and a no holds barred cast of fantastic opera singers perform irreverent material. Prepare for hilarity."
Don't see it if…"You are sensitive to anything, racial epithets, religious jokes, hate Jerry Springer, rudeness, etc. It’s a parody!!!"
Tony S 3, ShowScore: 86
See it if…"You want to see some extraordinary theater with a superb cast. The New Group narrows the cast from 33 to 17 on a tiny stage but it works."
Don't see it if…"You are not a TV fan or object to strong language and the realities of modern life."
See the Show Page with all critic and member reviews.