REVIEW ROUNDUP: “KPOP” Opened with a ShowScore of 82

“KPOP,” with a book by Jason Kim, songs by Max Vernon and Helen Park, and direction by Teddy Bergman, opened on September 22, 2017 in New York City. 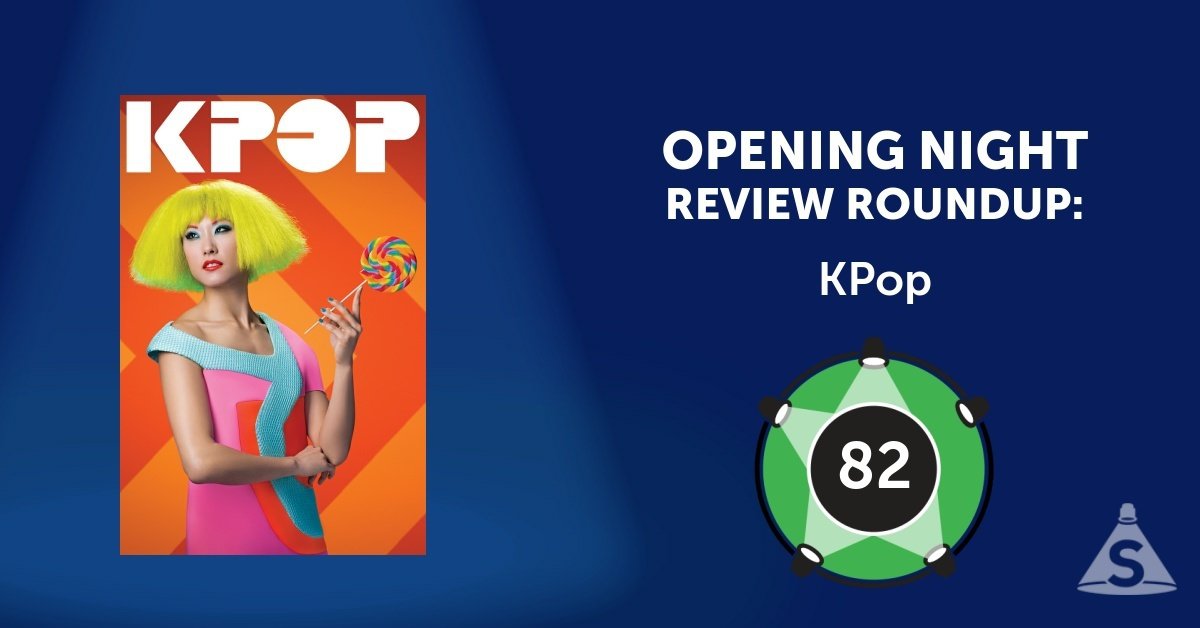 8 critics reviewed the show, resulting in a weighted average of 75.

Ben Brantley
The New York Times
ShowScore: 65
"Vibrates with the frenzy of its contradictions...'KPOP' is likely to come across as entertaining and enervating, in fairly equal measures...'KPOP' sometimes works too hard to put itself over. It is least interesting at its most didactic. And it suffers from its own conflicted intentions. The show is best when parody blurs into the already surreal dimensions of what’s being parodied...The pastiche fusion musical numbers...are as synthetically sweet and perversely addictive as the real thing."
Zachary Stewart
Theatermania
ShowScore: 75
"The most ambitious off-Broadway musical of the year, with pulse-quickening tunes, innovative staging, and just a little bit of disappointment...There's no musical without conflict, but Kim is unfailingly heavy-handed in his approach, underlining each important issue with a thick red line...Luckily, everyone in the cast is very good...Everything comes together for a final concert that has everyone dancing and singing along. 'KPOP' is great fun."
Adam Feldman
Time Out New York
ShowScore: 85
"The delightful new musical ‘KPOP’ knows what kind of immersive theater it wants to be...Tiny bubbles of pleasure keep floating up and bursting all around us. Pop! Pop! Pop! We’re sold. It isn’t all froth, however...'KPOP' has impressive breadth, even if at times it feels overstretched...But any misgivings are forgotten in the rush of the extended concert finale, which sweeps you up in the thrill of a crowd that can hardly wait to burst into applause."

The show was also reviewed by 25 Show-Score members, whose collective ShowScore is a weighted average of 84.

Thank You Five, ShowScore: 87
See it if…"You like pop music and sexy pop-star characters; support diverse storytelling; enjoy immersive theater."
Don't see it if…"You are not into walking/standing around; do not enjoy pop music; would rather have a more traditional theater experience."

Carolyn 6295, ShowScore: 73
See it if…"You loved 'Here Lies Love.' This show covers Korean pop, taking the audience to places in a record label 'factory.' Many themes are explored."
Don't see it if…"You want a story, and you want to sit down. There is much standing and watching, and for what it is, it is very long. It could be trimmed."
Gil K, ShowScore: 84
See it if…"You like immersive theater/moving around, K-pop music, or you want to see the great Ashley Park up close before 'Mean Girls.' Overall it's very fun."
Don't see it if…"You don't want to spend over 2 hours and 30 minutes walking around, or don't care for pop music. Plot is uneven."