Show-Score | By Linda Buchwald | Jan 26, 2018
Team Show-Score got to talking about our Broadway crushes and we began to wonder...who is YOURS? 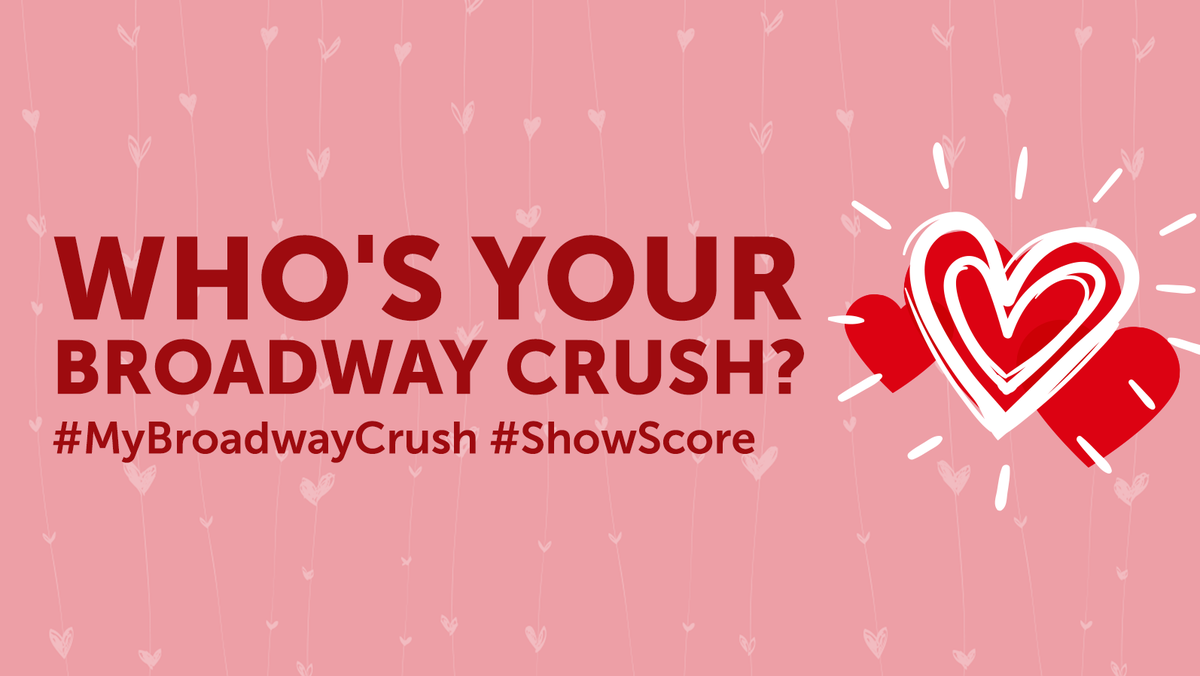 The other day in our staff online chat, someone asked about famous Broadway couples. That naturally led to all of us discussing our own imaginary Broadway partners, like Linda Buchwald and Santino Fontana (just as an example, I know he’s happily married).

We enjoyed hearing each other’s Broadway crushes so much that we want to hear yours.

And there’s an added incentive other than getting to discuss the actors that, in the words of Eliza Schuyler, make your heart go boom. We’re giving away two pairs of tickets to see Bernadette Peters and Victor Garber in “Hello, Dolly!” on Valentine’s Day. You’ll basically be the best Valentine’s date ever to whoever you choose to bring.

I could write a ten page blog post about my own Broadway crushes, but no one wants to read that (If you do, hit me up on Twitter. We’ll talk.), so I opened it up to my fellow Show-Score staff members. Read our list of Broadway crushes. Then enter the contest for “Hello, Dolly!” tickets by posting on social media using #mybroadwaycrush and tagging Show-Score. Make sure your post is public! Complete rules at the bottom.

Linda Buchwald - Santino Fontana. I’m attracted to talent and he’s as talented as they come. He can do drama and comedy equally well and he has a voice that dreams are made of. Some of my other favorites, if anyone wants to know what to get me for Valentine’s Day, are Zachary Levi, Justin Kirk, and Michael Esper.

Deeksha Gaur - Daveed Diggs. “He’s handsome, quirky, magnetic. Plus, he seems like he’d be super fun to grab a beer (or three) with!”

Ryan McCarthy -  “My girlfriend Samantha Watson. Production stage manager of ‘Significant Other.’” (I think it’s cheating to choose real-life significant others, even if they worked on a show with that name, but it’s sweet, so I’ll allow it.)

Ka-Ling Cheung - Steven Pasquale. “I love him.  That voice...and I think he's goofy sexy. My husband rolls his eyes when I talk about Steven. Even though I'm pretty sure my husband has a man crush on Steven too.”

Vic Cairl - “Katrina Lenk from ‘The Band's Visit’ and I'm straight...but she makes me question everything I know about love.” (Fun fact: It’s impossible to see Katrina Lenk in a show and not leave with a crush on her.)

Deacon Worrell - “I'm basically going with the entire cast of ‘Natasha Pierre, & The Great Comet of 1812.’ I walked out of there pretty much crushing on everyone I saw, with extra crush reserved for Denee Benton (so adorable, and that voice), Lucas Steele (no one that pretty should be as good a character actor as he is), and that one female accordionist who kept kicking her stockinged legs near my head (swoon).”

Robbie Block - “Danny DeVito for his rugged good looks, never-ending humor, and because I think we'd be a great ballroom dancing team and Rita Moreno because she’s a Broadway legend and very classy.”

Catherine Herzog - Colin Donnell. “He's like a modern-day Don Draper, but only the best parts.”

Nathaniel Rogers - “For my Broadway crush I wanted to say Jonathan Groff but then I realized the truth was it's actually a crush on Jonathan Groff's crushing on Sutton Foster as famously revealed in his ‘Miscast’ performance of ‘Anything Goes’ a handful of years back. The video has 1,340,000+ views of which surely 40,000 are mine.

Other crushworthy Broadway stars: Max von Essen for channeling Hollywood's Golden Age era with his beauty and talent. Kristin Chenoweth for that skyscraper sized stage presence in a 4'11" frame. Tony Yazbeck for his muscular grace in musicals. And Bernadette Peters for her ageless beauty and inimitable voice. I never miss her in a show which means I finally have to fork over ‘Hello, Dolly!’ money.” (Sorry, Nathaniel, you’re not eligible to win the tickets.)

Eileen Rivera -  Khris Davis. “I saw him in ‘The Royale’ and was surprised to learn it seemed to be his first big show. Then in ‘Sweat,’ it became clear that the talent he showed us in ‘The Royale’ was not a fluke, and now I just want to follow this man from show to show! Also, dreamy.”

Janie Dickerson - Taye Diggs “From ‘Rent’ to ‘Hedwig’ to his adorable duet with Idina, he is nothing but classy, talented, and just ugh that smile.

Who are your Broadway Crushes? Share on social media this Valentine's Day season using #MyBroadwayCrush #ShowScore and you could win two tickets to "Hello Dolly!"

The random drawing contest (the “Contest”) is free to enter. Show-Score staff, contractors, and vendors are not eligible to enter.

After the Contest Period ends, winners will be randomly chosen, at Show-Score’s sole discretion, after which Show-Score will promptly announce the winner(s).

In order to receive the prize, the winner must agree to be included in Show-Score’s marketing efforts, including those on Facebook, Twitter, and other social networks, through email campaigns, and on the Show-Score blog and website. The winner can choose to be identified with his or her real name and photo, or the pseudonym and avatar image that he or she uses on Show-Score. The winner must agree to accommodate reasonable requests from Show-Score that the winner document his or her experience of attending the show (such as a picture in front of the theater). The winner further agrees to let Show-Score use this documentation in Show-Score marketing efforts.

The Contest is void where prohibited.