Adam Guy is a theatre lover and tour guide who gives tours of New York City through his company I Know A Guy NYC Tours. He has been a Show-Score member since 2016. 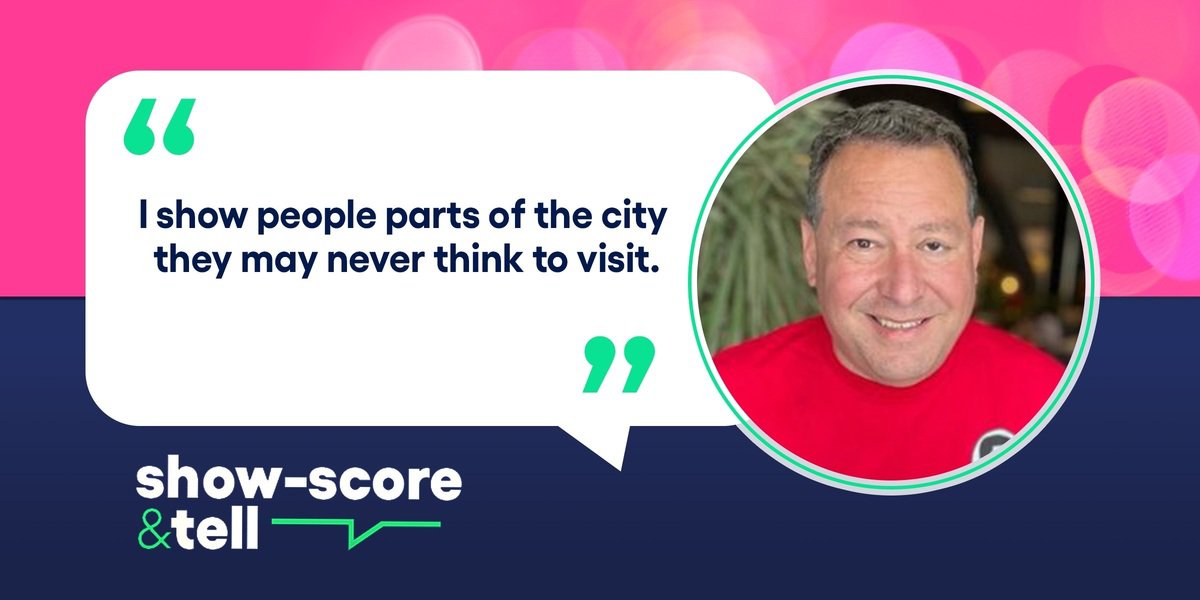 "I recently left a 25-year career doing nonprofit marketing and fundraising. And I’ve launched a tour guide company, because I love the city and I love showing people the city.

It’s called “I Know A Guy NYC Tours” … because my name is Adam Guy.

During my time working a 60 to 80 hour a week job, for fun I’d go give these little “free greets'' they called them. And then before the pandemic, I thought, I'd just go get my tour guide license, because you never know when it'll pay off.

And really what if I gave a few tours, it'll supplement my Broadway habit.

Literally, that's why I started it.

I’ve seen Hamilton (97) 11 times now. Twice Off-Broadway, the first being its fifth performance ever. It was the first performance after they got rid of the pool. You know, there was a pool? On the rotating stage there used to be a pool in the middle.

I do tend to lean towards immersive theatre, though. I love that sort of immersive experience where you're not necessarily part of the show - like you don't have to interact all the time - but you are experiencing it. Outside of a chair, or outside of a proscenium.

I saw one immersive show called Broken Bone Bathtub (92). Have you heard of that? The premise was you buy a ticket to a neighborhood. And once you buy your ticket, you're given an address to a stranger’s apartment and you arrive there and sit in their bathroom and watch a woman taking a bubble bath and delivering a show.

And she tells a story about how when she first moved to New York and she was alone, she had to rely on the kindness of strangers to help her take baths after she broke her arm. And what that was like, and how that made her feel. It was fascinating. It was just really different.

There's a sort of normative experience when you go to the Richard Rogers, or even Circle in the Square, where you're in this shared space with people who have a certain set of expectations about how you're going to behave and what you expect to see. When you do something immersive, you don't know what's around the corner. And you don't know how it's gonna play out.

I'm a private tour guide. Only groups of up to eight people. And I like that personal, intimate experience.

You can hire 1000 tour guides to take you to see Times Square and Rockefeller Center. And you can hire me to do that, too.

But I like to show people parts of the city they may never think to visit. And you know, people will say to me afterwards, "We would have never seen that without you." And I think that's really powerful to me. That I can immerse them in some place entirely new."

To read more of Adam's thoughts on theatre, be sure to follow him here on Show-Score!