The Book of Mormon On Broadway: Everything You Need to Know About Its Inspiration

Learn everything you need to know about "The Book of Mormon" at Show-Score, and find out what made the show unique and successful. 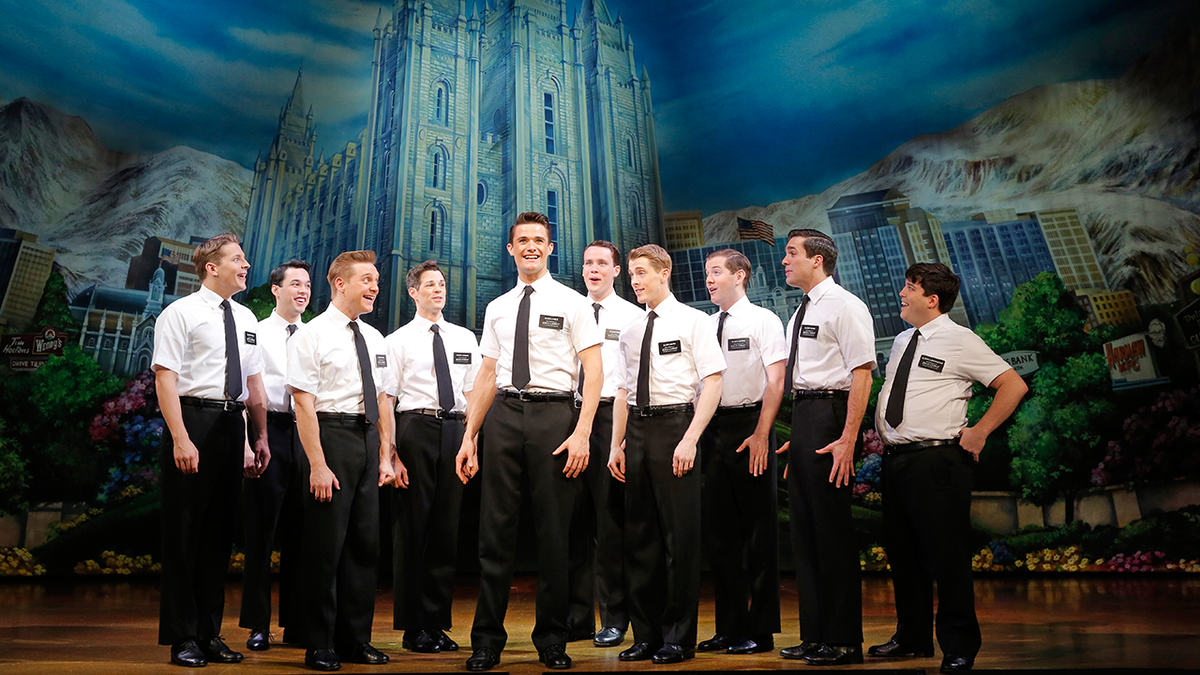 "The Book of Mormon" National Tour | By Joan Marcus

If you’ve ever lived in suburban America, chances are you’ve heard that familiar sound, opened the door, and found yourself face to face with two friendly looking youths who are super stoked to chat with you about the Church of Jesus Christ of Latter Day Saints. And chances are you’ve politely said ‘no, thank you,’ and continued about your day.

Did you know that familiar ‘ding dong’ is also the opening of one of the most successful Broadway shows ever — “The Book of Mormon” musical?

It’s a Broadway smash sensation; winner of nine Tony awards, running since 2011 and... based on a South Park episode? That's right—"Book of Mormon" play was brought to you by the same hilariously twisted minds that created the hit TV show—Trey Parker and Matt Stone. The “Book of Mormon” on Broadway was inspired by the 2003 episode “All About Mormons.”

(Screencap from "All About Mormons" // South Park, Comedy Central)

In the episode, a new family, The Harrisons, move into town. The son, Gary, becomes a target for the neighborhood kids to bully. Main character Stan goes to beat him up, yet somehow ends up accepting a dinner invitation to “Family Home Evening.” The seemingly perfect and unendingly cheerful family plays games, and read from the Book of Mormon.

In what is arguably the most memorable segment of the show, Gary tells the story of Joseph Smith, the founder of Mormonism. Each seemingly ridiculous (but fairly religiously accurate) statement is punctuated by an upbeat “dum dum dum dum dum” (alternate interpretation: “dumb dumb dumb dumb dumb.”) It's pretty clear to see the direct connections here to the music from "The Book of Mormon" on Broadway!

The Harrisons seem happy... too happy. Stan is immediately creeped out, but also intrigued. After Stan asks his parents why they are not Mormons, his father goes to confront his new neighbors, assuming they are fanatics. Disoriented by their politeness and perfection, Stan decides to convert his family. Of course, the conversion doesn’t last, and the episode ends with the main group of boys back to their usual antics, though with a new respect for Gary and his family.

(Screencap from "All About Mormons" // South Park, Comedy Central)

While the episode is funny (and rather edgy in that typical "South Park" way), it still brings a touch of warmth and kindness to the Mormon characters. Just like "The Book of Mormon" Broadway show, Matt Parker and Trey Stone made sure to make the Mormons characters: not caricatures. It's something that comes through in the "Book of Mormon" play as well.

The episode was well-received by fans...and thus, the idea for "The Book of Mormon" Broadway show was born.

Of course, the storylines are different. “The Book of Mormon” Broadway is set in Uganda, following two young Mormon elders (men who are members of the church) as they are sent on their mission to bring the good word of (you guessed it) the Book of Mormon to the people of a remote village. But the same silliness and criticism characteristic of South Park applies to the show "The Book of Mormon" Broadway, highlighted by songs such as “All American Prophet” and  “A Mormon Just Believes.”

Despite is lewdness and unapologetic irreverence, "The Book of Mormon" play is remarkably heartwarming, focusing on the importance of friendship and helping others. And clearly they’re doing something right, because audiences love it! See "The Book of Mormon" on Broadway, currently playing at the Eugene O’Neill Theater.