The Lights Are Not Only Bright on Broadway: The Oregon Shakespeare Festival

When I told my friends on the West Coast that I planned to attend the Oregon Shakespeare Festival in late June, knowing that I am an inveterate playgoer in New York City, they warned me not to expect too much. I am happy to report that they vastly underestimated the theatrical experience I would have at the Festival. 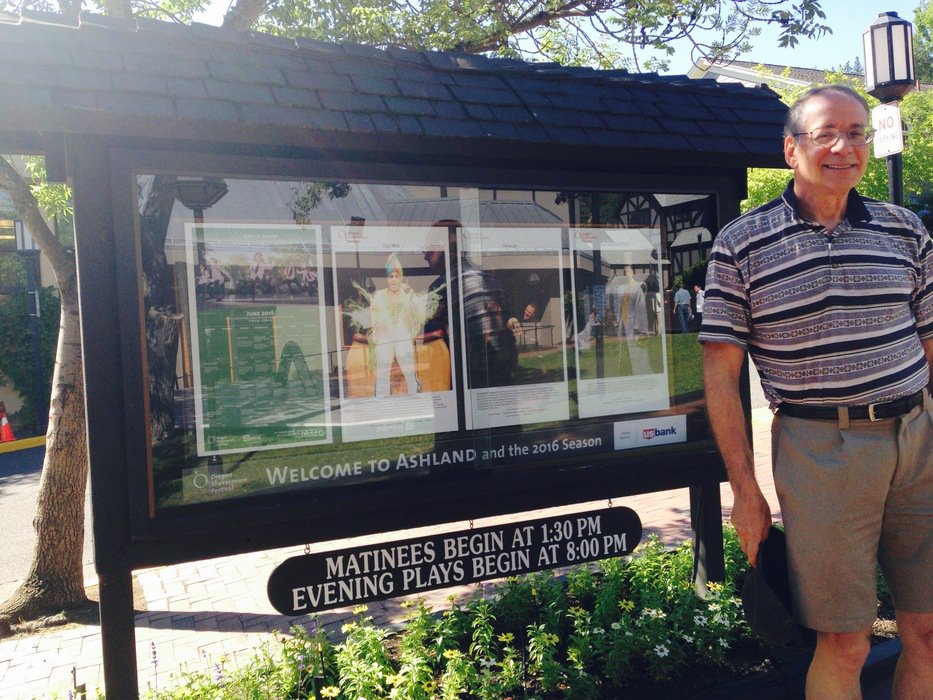 Soon after I sat down to see Hamlet in the Festival's Allen Elizabethan Theatre, an open-air theater inspired by Shakespeare's Globe Theatre in London, I knew that I was not going to see a typical portrayal of the Prince of Denmark. There on stage alone was the Prince, brilliantly played by Danforth Comins, in skin-tight leather pants, plucking the strings of a bass guitar.

The Oregon Shakespeare Festival, located in charming Ashland in southern Oregon, was founded 81 years ago. This season goes from February 2016 until the end of October, and features 80 actors who take on a variety of roles — in both Shakespearean and new works. For this reason, one day you can see an actor cast as the commanding lead in a play, the next as a spear-carrier.

In addition to Hamlet, I saw a raucous Twelfth Night, hilariously reimagined as a 1930s screwball comedy, and a new play, Roe, that portrays with humor and insight dueling versions of the Roe v. Wade abortion story.

(The audience in the Allen Elizabethan Theatre)

One of the high points of the Festival for me was a back-stage tour provided by the Festival for a small fee. I was amazed when the tour guide — a slight, laid-back gent —turned out to be Ted Deasy. I had just seen Ted in a major role in Twelfth Night transform himself into the ridiculously pompous Malvolio and also in a small role as the guard Bernardo in Hamlet. How many times in New York do you get to converse for 90 minutes with an actor who has played in productions you have just seen?

We peppered Ted with questions, learning among other things how actors make lightening-fast costume changes (it’s akin to how the pit crew changes tires on race cars at the Indianapolis 500).

As a newbie to the Festival, walking in a trance from my hotel three blocks away from the theaters to watch a number of first-class productions, I started to understand how the Festival has become for many a theater-rich Shangri-La, to which they return year-after-year.

So how would I evaluate the Oregon Shakespeare Festival using Show-Score speak?  Don't see it if you can't afford to travel to Oregon. But if you can, do see it if you wish to see fine Shakespearean and other plays in a magical space for actors, directors and audience members alike.