Lin-Manuel Miranda made theater kids across the country proud when he hosted "Saturday Night Live" last night. Missed it? Don't worry: we've got the highlights! 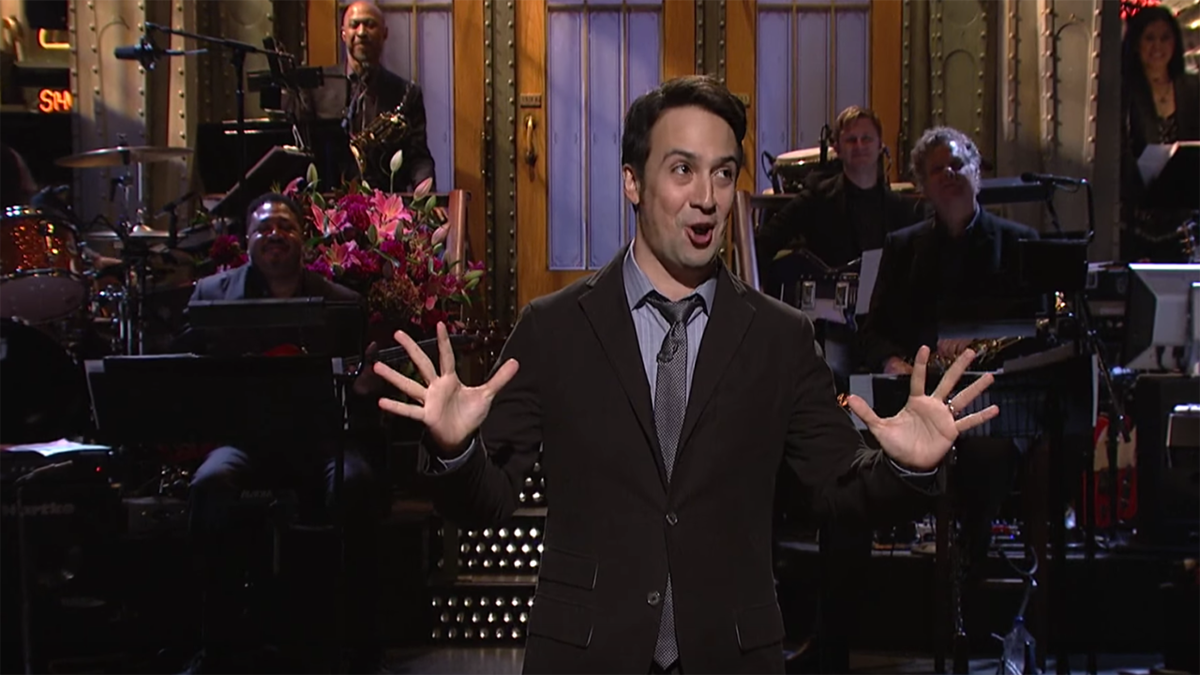 We never thought we would see a theater composer/actor hosting Saturday Night Live outside of our dreams, but it happened last night. Such is the power of "Hamilton" and Lin-Manuel Miranda!

Though Miranda joked in his opening monologue that "Hamilton" is one of the biggest hits ever on Broadway — "so that means most of you watching at home have no idea who I am" — he has truly crossed over to the mainstream. As the host of SNL, he stayed true to his theater roots.

These are some of Miranda's best moments:

For those who were hoping Miranda would perform something from "Hamilton", he did not disappoint. He sang an updated "My Shot" about his hosting duties, complete with backup dancers. Lyrics included this gem: "Tonight I'm finally earning my spot on this wall, in this hall, I'm getting a piece of it. Like Miley, Schumer, Tracy Morgan, and this piece of…" He didn't finish that sentence as he pointed to a picture of Trump, but you can guess the rest!

He even threw in a, "You're never gonna be president now," from "The Reynolds Pamphlet" sung to the same picture. Lorne Michaels even made an appearance to ask for "Hamilton" tickets. When Miranda said no guarantees, Michaels said in desperation, "I can do a matinee!"

The Wells Fargo scandal over fake accounts was a while ago, but the SNL writers saw the connection to "The Music Man" and ran with it. It was nice to see another musical number, though they could have done more with it. But it did give us fuel for our new campaign to get Miranda to play Harold Hill in an NBC live musical of "The Music Man"...

This music video about a high school cast party was pitch perfect, as anybody who was in high school plays can tell you.  Kate McKinnon, Aidy Bryant, Melissa Villaseñor, and Cecily Strong killed it with references to character shoes, old-age makeup, 10 p.m. massage trains, and impressing guys with the most risqué moves they know: the choreography from 'Chicago'. Miranda showed up rapping as Cody, a triple threat who always gets cast as the lead. Sporting a "Godspell" T-shirt, he revealed that, "Mrs. Donahue said we can do 'Rent' this year."

This was a short segment, later in the evening, in which an immigrant calls his mom from North Dakota to tell her about the United States. It was notable because Miranda got to speak in Spanish and for his awe at the fact that in this country, they put marshmallows in salad.

Next season on "Stranger Things" promises to answer the burning question: "Where is Lucas' family?" Leslie Jones and Kenan Thompson played his parents, revealing such hard-hitting truths as, "Baby, people who look like us already live in the Upside Down." Miranda perfectly channeled Gaten Matarazzo and his adorable lisp as Dustin. And Kate McKinnon played Eleven, scarfing down Eggos, naturally.

Since Miranda made history through hip-hop cool, it was funny to see the tables turned when he played a not-so-cool substitute teacher trying to connect to his students through hip-hop. It wasn't exactly working: these AP English students were sick of teachers trying to teach them through that form of music.

This wasn't technically part of the show, but Miranda wrote some of the music for the next Disney animated movie, and we got to hear some of it in the ad! There were also commercials for Broadway shows like "Hello Dolly" and "The Book of Mormon".