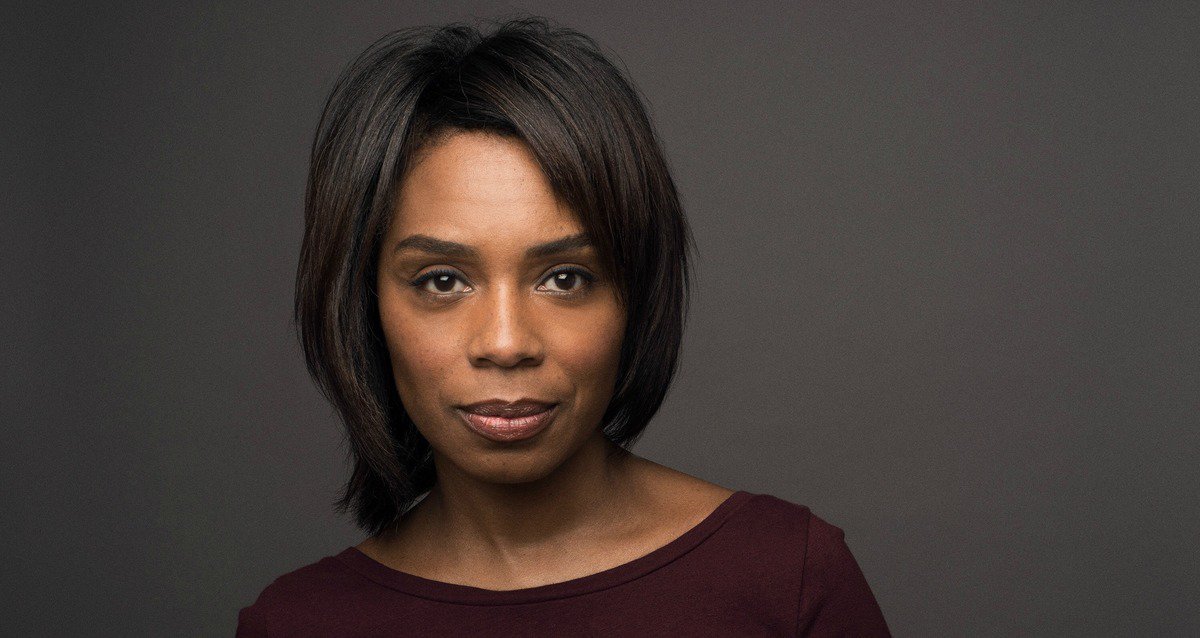 Now playing at Studio 54, “Sweat” is giving voice to the forgotten factory workers of America in this Pulitzer Prize winning play. Written by Lynn Nottage, “Sweat” tells the story of workers in Reading, Pennsylvania as they are pressured to work more just to make ends meet and keep their jobs in a changed economy.

Last week, “Sweat” earned several Tony Award nominations, including “Best Performance by an Actress in a Featured Role in a Play” for Michelle Wilson (“Cynthia”).

We recently connected with Michelle, just prior to the nominations, and heard her perspective on the importance of “Sweat,” what it says about our culture, and how she relates personally to the material.

She also shed light onto the critical and fan response that helped the show earn its transfer from the Public Theater to Broadway.

Show-Score: It was so exciting to see this amazing production transfer from the Public Theater to Broadway. How has it been for you and the cast?

Michelle Wilson: It has been really exciting. You know what's awesome about this ensemble… is that we are just such workhorses. While there's all this sparkle happening outside it was so satisfying to get to get back into the rehearsal room. Lynn [Nottage] is just so damn smart. Her writing is so dense, it's deceptive... It's so conversational, but it's so full of poetry and metaphors. You have to dig into it, but you have to do it lightly at the same time. It’s a beast.

When we were rehearsing for the Public, I'm telling you, at least a couple of times a week, one of the other cast members would come in and say, "I'm going to get fired next week. I can't do this." We were so raw and it was so intense. We just wanted to do right by the material and by this amazing ensemble.

S-S: What about the response from fans? For you as an artist who has created a role, how does that feel for you to earn the response that you've gotten?

MW: I think that sometimes art shows how necessary it is. That's what “Sweat” is doing in this moment of time… It’s about how we got here in this moment in time. How we can include everyone's stories.

It does such a beautiful job of not anthologizing these working people, but instead it has a very loving, human eye on their strengths and their flaws… There is no whimsy, there's a lot of love, and a lot of humor, and deep loyalties and community. It feels like this play is very necessary. That's the response we get from people.

S-S: Why do you think it's necessary?

MW: It either goes from, "I know these people," to, "How didn't I know my neighbors were hurting so much?" to people just walking out of the theater stunned. We were doing the Broadway Cares Equity Fight Aids [donation collection, post-show] and you're collecting money and people just want to talk. I really feel like this is one show where we could have had a talkback every night and it would be well received. 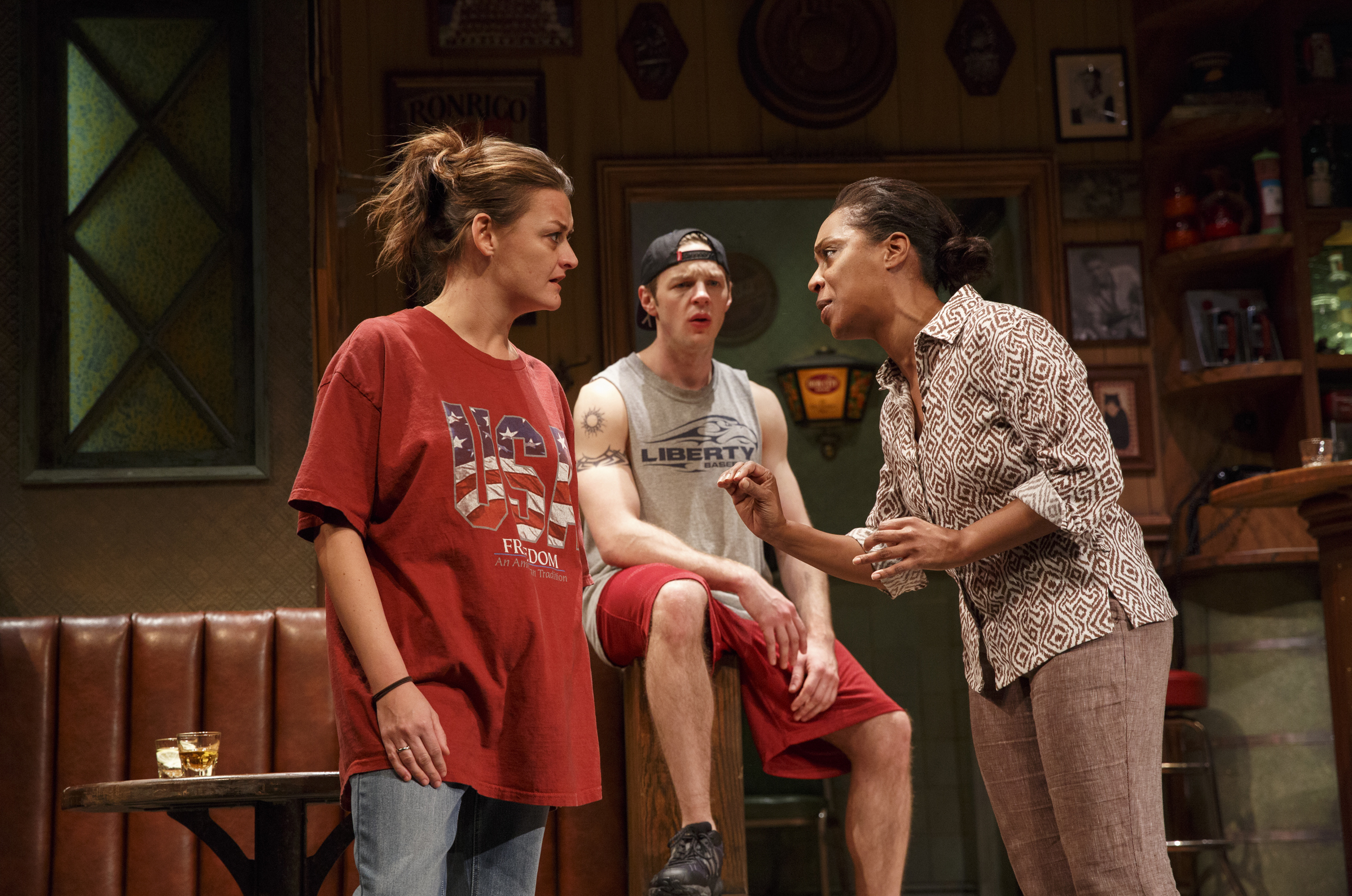 Alison Wright, Will Pullen and Michelle Wilson in "Sweat". Photo by Joan Marcus

S-S: What do you think of the relevance, especially in this point in time in American history, and of the modernity of this play?

MW: We haven't figured out [as a country] how to listen to each other. It's very difficult for us as Americans, it appears, to have these nuanced conversations. Instead, it becomes us versus them, it's very binary.

I think that is the role of art. It can do it. It can have these humanizing, empathetic conversations that a society doesn't have the language or the skills for. That's the role of the artist. It's so profound to be in the middle of this.

S-S: There’s tension between the characters as they, well, try to survive. And, your character -- “Cynthia” -- Seeks upward mobility, making her seen as a traitor of sorts. What do you think of that, how that interaction happens?

MW: It's really said so much about the American striver. This dream that we all committed to and what happens when you're no longer necessary… you're stripped of your dignity and what you knew. Each character is just doing what they are supposed to do. Or what they thought they were supposed to do, in order to get the payoff of a decent life to raise their child and live in the pursuit of happiness… That's the thing, we all want the same thing.

We did this at the Public and we have been running for a bit before the election. The night after the election… we had a show and we had a talkback. I'm telling you, the majority of the audience was just sitting there staring at us on the stage, stunned. This is what happens when you ignore whole swaths of your community. We forget that America is so large. How do we have these larger, national conversations where we're not deflecting each other on needs and wants, but instead are using our empathetic eye and ear to hear each other?

S-S: How do you personally empathize with these forgotten people, like those portrayed in this show?

MW: I'm from Detroit so we were canaries in the coal mine. I remember being young and they were saying, "We're sending psychologists into the schools because the kids are so depressed because their parents have been laid off." It affects everyone in the community. People just want to work hard, and get respect, and take care of their families, and live a life. It's really so simple, but it's so profound, and times are changing. It's de-industrialization.

What were some of the key messages you took away from Sweat? Think it will win the Tony? Let us know in the comments below!