Show-Score | By Douglas Gray | Jul 18, 2017
"The Fantasticks" has bid farewell to the NYC stage. Douglas Gray shares his family's 57 year journey with the little musical that could. 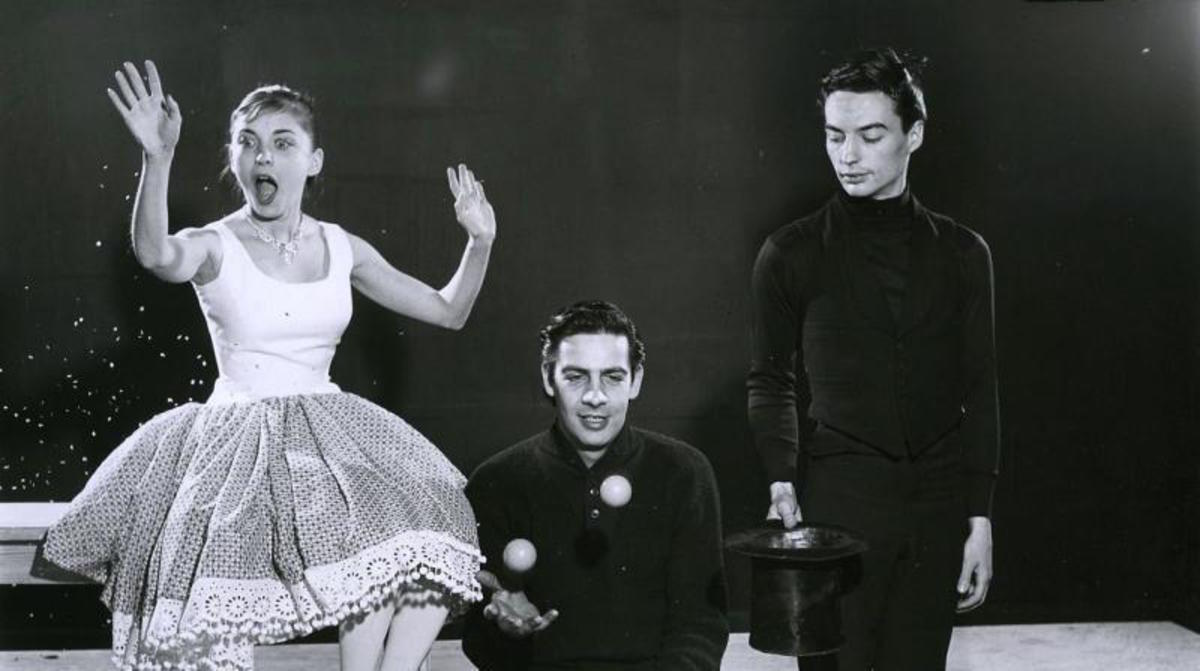 The Original 1960 Off-Broadway Cast of "The Fantasticks" | By BlueGobo

In the spring of 1960, my parents became angels.

Of course, people who invested money in theater weren’t called “angels” back then. Those were the Wild West days of artistic financing, long before the Securities and Exchange Commission (SEC) set down rules to govern net worth or salary requirements to define who could be an angel. There were no financial ceilings or floors—just high hopes. 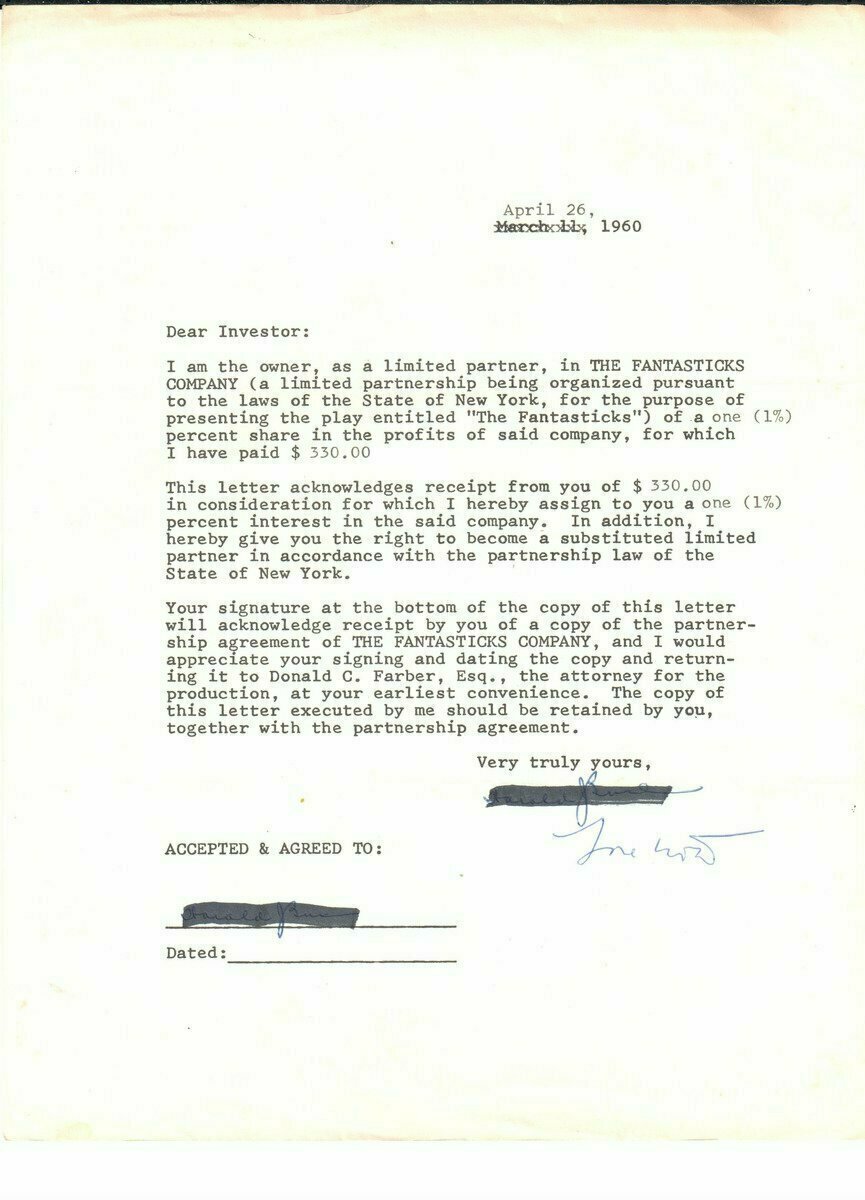 That year, 1960, our neighbor in Merrick, New York was a bright young attorney named Don Farber. He had just taken a career turn into the then-developing field of entertainment law, and he invited my parents to see a small new musical he represented. It might have been the first musical he’d ever represented, I’m not sure. Naturally, the musical needed financial backing, and Don was offering to get my folks in on the ground floor.  They agreed to give it a whirl, and then attended a preview performance.

What they encountered was an intimate, dreamlike love story. Two fathers have engineered a feud between their families in an effort to trick their children into falling in love. The starry-eyed young lovers fall right into the trap, but it takes a dose of cold reality (and some timely interference from the narrator) to make their romance real.

My parents fell in love with the terrific cast and unforgettable songs: from the enduring "Try to Remember" and "Soon It’s Gonna Rain", to the cheeky take on parenting woes, "Plant a Radish, Get a Radish".

It was an untried show written by unknown authors with an untested producer. And the icing on the cake? The show’s title was inexplicably misspelled. None of which deterred my parents. They purchased 1% of the untried show for a whopping $330, which made them ground-floor investors in “The Fantasticks”.

That little show opened in May of 1960 at the Sullivan Street Playhouse in Greenwich Village, and, well—the rest is history. 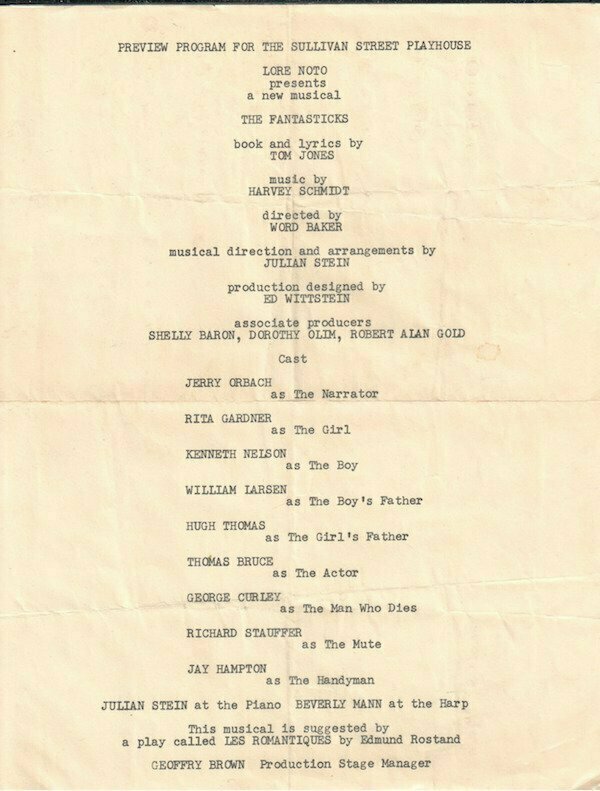 “The Fantasticks”, with book and lyrics by Tom Jones and music by Harvey Schmidt, ran Off-Broadway for 42 years (closing in 2002 only to reopen in 2006). It was, and still is, the longest running musical in history. It launched the careers of its initial stars and of generations of actors to follow. The U.S. still sees over 250 amateur productions each year, and worldwide there have been 11,000 productions over the years. “The Fantasticks” was the original, and ultimate, sleeper hit.

And it wasn’t just the actors who enjoyed the show’s long success. Don Farber honed his legal skills over the years, but back in 1960 he committed a happy blunder. At that time, the usual term for this type of the investment was 29 years (and it’s much shorter now). Don wrote up the agreement with a term of 58 years—double the usual contract length. And 57 years later, the checks, however tiny, keep coming. Don went on to write the earliest books on investing in theater and how to be a producer. His “From Option to Opening” and “On Producing” are still regarded as the Old and New Testaments of the field. So, contract snafu aside, “The Fantasticks” was the foundation of his success.

In June of this year, the revival of “The Fantasticks” announced that it was finally, finally closing. Since 2006, the show had been performed on the fourth floor of a Midtown office building that houses two small performances stages. It has been dubbed, perhaps rather too optimistically, The Theatre Center. (Last year, the marquee read Snapple Theatre Center, but I guess the Snapple soured.)

I asked my mother if she wanted to attend the final performance with me.  She said no. She wanted to remember “The Fantasticks” the way it was—down at the tiny Sullivan Street Playhouse (now yet another faceless condo building). She wanted to remember Jerry Orbach four decades before “Law & Order” fame; Kenneth Nelson, who went on to star in “The Boys in the Band”; and ingénue Rita Gardner, now 83 and still appearing on Broadway. That was her “Fantasticks”.

I bought my ticket and took my chance. After all, a long-running show can have a special allure. Look at all the Show-Score members who are still enthusiastically writing about "The Phantom of the Opera" (ShowScore: 88) and "The Lion King" (ShowScore: 92) decades after they opened. Plus, Show-Score members gave "The Fantasticks" a very positive 78 when it was running. So why not?

That night, the Theatre Center lobby offered the usual concessions and merch, with one addition. To mark this end-of-an-era occasion, a miniature "step and repeat" (a temporary backdrop for photos) filled a wall by the entrance.

Looking around the room I recognized Tom Jones, and I got his attention by whispering "Philemon" in his ear. It’s the name of his unproduced musical about an Egyptian actor who's mistaken for a future Christian saint. I saw a workshop 30 years ago, and I can still remember parts of the score. Tom lit up when I told him that, and he let me know that even though it never quite worked as a stage show, "Philemon" has found life as a choral piece performed in churches.

This is the kind of story you hear when you've been tied to a group of artists for decades. I loved having that moment of connection before I headed into the swan song of the show that brought Tom and I together in the first place.

And then it was show time. 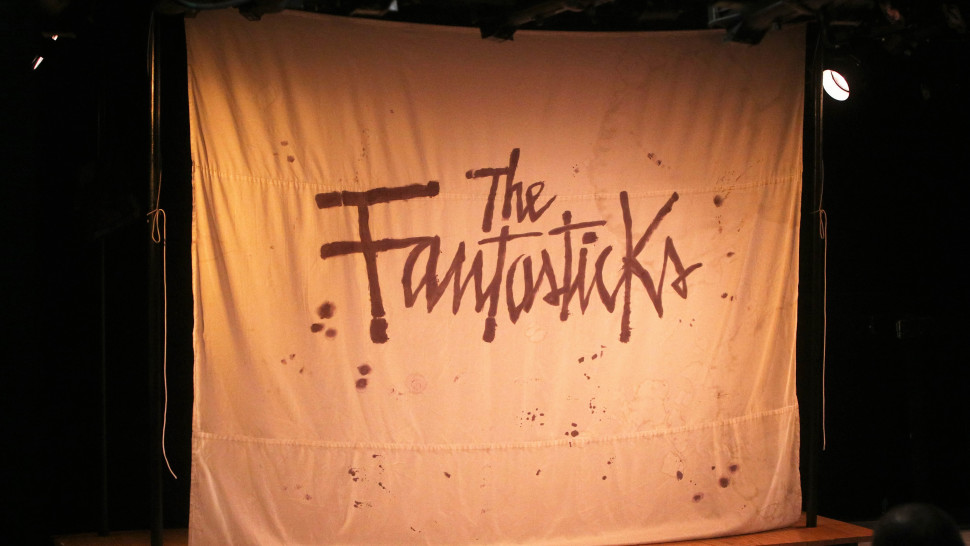 “Fantasticks” has always been a pocket-sized musical, capable of fitting neatly into the most intimate space. But we entered the theater into what I can only describe as a cave—with theater seat stalagmites rising from the floor and stage lighting stalactites lowering from the ceiling. During the performance, when the actors had to stand on chairs or boxes, they had to duck their heads. They did it artfully, but I thought I could see evidence of makeup encrusted Band-Aids and singed hair. I imagined casting calls the read: "All auditioners must be under 5'6" under pain of, well.... pain."

What can I say about the performance? The songs are still beautiful, the script still engaging, and the simple design still holds up. But the show I saw that night proved that “The Fantasticks” time had come and gone. Not because the show no longer resonates, but because the production has more than run its course.

To use one small example: In the original run of “Fantasticks”, The Mute was an omnipresent character who represented the wall between the families: the silent, expressionless helpmate and an observer of all the play's actions. We, the audience, are The Mute. We’re involved in the intimate action, but unable to change the course of events.

But at this performance "The Mute" had become "The Mime”. A lithe dancer silently reacted, commented, and interacted in every scene with forced facial expressions of approval or scorn. This mime, figuratively, wouldn't shut up.

It’s exactly the kind of thing that can happen to a long-running show after the original producers and artistic team have left the building.  Time passes and performances change, and who is there to say yea or nay to the changes? For some plays this can be a positive, organic artistic evolution. For others—certainly for “The Fantasticks”—it’s a slow death of the original dream.

“The Fantasticks’” producers are long gone.  The show stopped attracting the freshest talent in NYC.  With no one in charge providing the will or the passion to keep this beloved musical intact, “The Fantasticks” couldn’t survive.

It's an amazing, nearly impossible task to produce a hit musical. But perhaps it’s even more difficult to maintain the high standards of a production as the years pass. Once the love and care of a production are gone, they never return. “The Fantasticks” leaves half a century of artistic excellence, moving performances, and terrific memories behind it. That’s not a bad legacy, however it ended.  I will choose to remember that intimate little musical down on Sullivan Street.

How about you? Have you seen a long-running show recently? Have you revisited something for the first time in years? What did you think? Let me know in the comments!