Your guide to London Christmas Shows in 2022

Everything you need to know about the shows hitting London theatres this festive season! 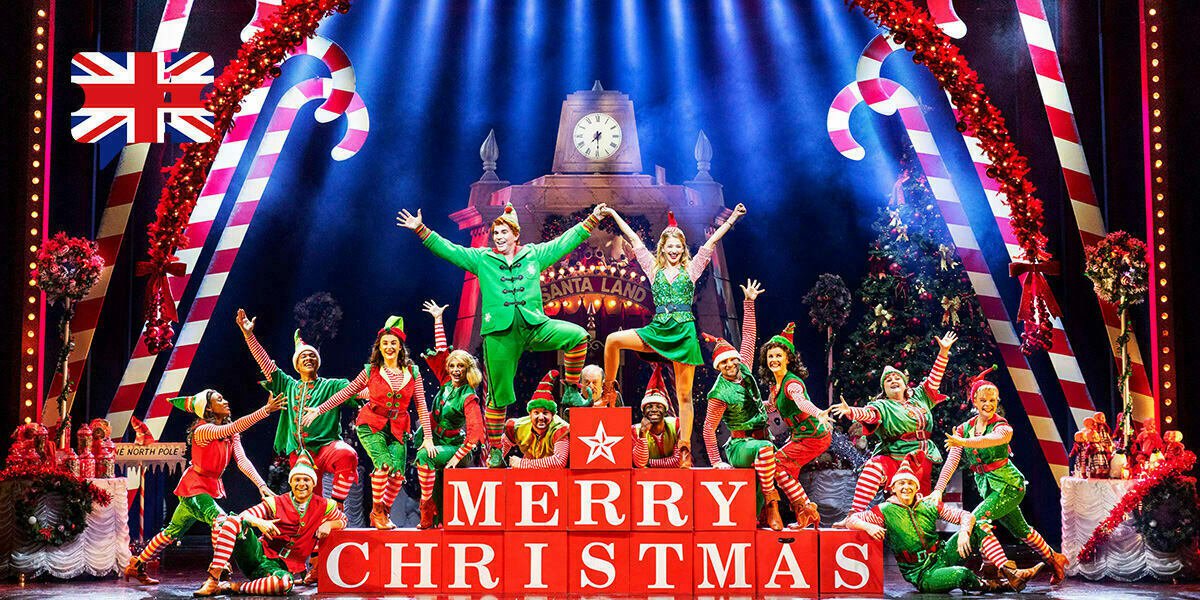 The cast of 'Elf the Musical' | By Mark Senior

To quote Slade "IT'S CHRISTMAS!" - which means a super selection of Christmas shows has descended upon London!
From star-studded pantos to irreverent Christmas comedies, there's a London theatre show to suit everyone this festive season! Here's our guide to just some of the shows lighting up London theatres this December!

Jack and the Beanstalk at the London Palladium

Fee-fi-fo-fum, we smell celebs at the Palladium! A staple of the Christmas season - the Palladium panto - is back with another family-friendly festive favourite: Jack and the Beanstalk!
As always, this year's Palladium pantomime has an all-star cast, including The Vicar of Dibley star Dawn French as Dame Trot, panto icon Julian Clary as The Spirit of the Beans, The X Factor winner Alexandra Burke as Mrs. Blunderbore, puppeteer Paul Zerdin as Silly Simon, Gary Wilmot as Queen Nigella, Louis Gaunt as Jack Trot, Rob Madge as Pat the Cow and Natalie McQueen as Princess Jill.

Mother Goose at the Duke of York's Theatre

Speaking of star-studded pantos, you might want to take a goosey-goosey-gander at another pantomime flying into the West End this winter! Stage & screen icon Sir Ian McKellen and beloved comedian John Bishop lead this production of Mother Goose, which is making a stop at the Duke of York's Theatre while on its UK tour! If you're not local to London, don't worry, you can catch Gandalf as Mother Goose until 1st April 2023 in cities across the UK, including Chichester, Sheffield, Wolverhampton, Liverpool, Oxford, Dublin & Cardiff!

ELF the Musical at the Dominion Theatre

"The best way to spread Christmas cheer is singing loud for all to hear" - Buddy the Elf is taking his famous saying to heart this Christmas with the arrival of ELF the Musical at the Dominion Theatre! This family-friendly musical - starring Simon Lipkin & Tom Chambers - is the stage adaptation of the beloved 2003 movie that starred Will Ferrell & Zooey Deschanel.

A Christmas Carol-ish by Mr. Swallow at the Soho Theatre

Ted Lasso star Nick Mohammed has ditched AFC Richmond for a retelling of Dickens' classic tale ... sort of. The Dickens Estate hasn't granted self-styled ‘Yorkshire Pudding’ Mr. Swallow (Mohammed) the rights to A Christmas Carol, so he is forced to replace Scroogem Jacob Marley and everyone else with Father Christmas, Elves, and other assorted Christmas characters! Also starring Miranda star Sarah Hadland, A Christmas Carol-ish is a more grown-up version of a traditional panto, but is still suitable for older children (ages 10+)!

Sh!t-Faced Showtime: A Pissedmas Carol at the Leicester Square Theatre

What would you get if you took a traditional production of Charles Dickens' A Christmas Carol but one of the actors was absolutely hammered? Why A Pissedmas Carol of course! In their trademark style, the team at Sh!t-Faced Showtime (also known for their Sh!t-Faced Shakespeare productions) turn this classic Dickensian tale into a hilarious night at the theatre as audiences watch one of their troupe stumble through the show while drunk ... and also play a role in getting that actor even drunker!

A Sherlock Carol at the Marylebone Theatre

Taking the main stage at the brand new Marylebone Theatre this Christmas is this festive comedy mash-up! Devastated by the death of his benefactor Ebenezer Scrooge, a grown-up Tiny Tim seeks the investigative skills of Sherlock Holmes to solve the mystery surrounding his suspicious death. This production marks the UK premiere of A Sherlock Carol, which debuted in NYC in 2021!

A Christmas Carol at the Old Vic

Old Vic Artistic Director Matthew Warchus’ big-hearted production of A Christmas Carol - adapted for the stage by Harry Potter and the Cursed Child playwright  Jack Thorne - returns to the Old Vic for another Christmas after its debut in 2017. This year, the Tony Award-winning Welsh actor Owen Teale - best known for his role of Alliser Thorne in Game of Thrones - takes on the role of Dickens' famous miser.

Want to know all of the festive shows playing in London this Christmas?
Check out all of the Christmas theatre shows in London in 2022!