Who’s Ahead in the Tony Races? We analyzed the odds for "Best Musical!" 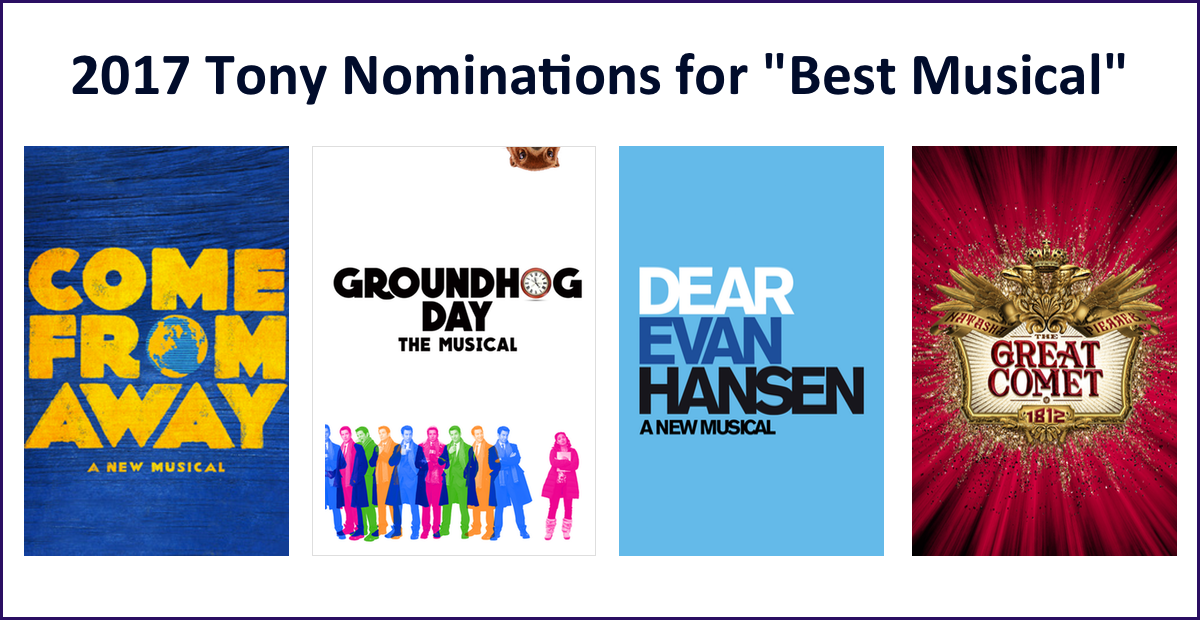 Working For It: With its story of good-hearted Canadians who assist re-routed airline passengers in the wake of 9/11, “Come From Away” is a show about the value of kindness. That has made it a feel-good hit in the most genuine sense. When people cry about a show and call it an antidote for our current political climate, then you'd better believe it's a Tony contender. Its box office success won't hurt, either.

Working Against It: Some people feel the show treats its serious subject matter too lightly.

Working For It: A completely original musical – meaning its story isn't based on any existing stage production, novel, or movie – “Dear Evan Hansen” has nevertheless found a massive following. People are responding to the story (about an alienated teenager who gets pulled into a web of lies), the relevant use of social media in the plot, and the power-pop songs. They're also citing lead actor Ben Platt as the season's breakout new star. Toss in the massive ticket sales, and you've got a major musical.

Working Against It: Skeptics have resisted the show's conclusion, which they feel is too tidy.

Working For It: This is the rare movie-to-stage adaptation that actually feels it belongs in a theater. The jokes work; the songs work; and star Andy Karl works harder than anyone.

Working Against It: Of all this year's nominees, this one feel the silliest. Can it compete with the more serious shows on the ballot?

Working For It: Director Rachel Chavkin's thrilling staging – which puts the audience in a Russian supper club, where the actors perform all around – makes this tale of Russian love and betrayal feel like nothing else on Broadway. The score is bold and original, and the entire ensemble gives exciting performances that balance deep feeling with wild showmanship.

Working Against It: The show may be too cerebral for some voters, and some voters simply don't want actors running past them during a show.

THE BOTTOM LINE: This is great lineup, and many predict it’s Hansen’s to take home. However, “Come From Away” is winning people's hearts, so even though it may not win any other Tonys, don't be surprised if it takes the big one.

AND THE WINNER IS: "Dear Evan Hansen"
<Previous    All Categories   Next>