Don't Miss the Soulpepper Festival, This Month in NYC!

Canada's Soulpepper Theatre is taking over the Signature Theatre this month. Here's your guide to their exciting mix of plays, musicals, solo shows, concerts, and impromptu cabarets. 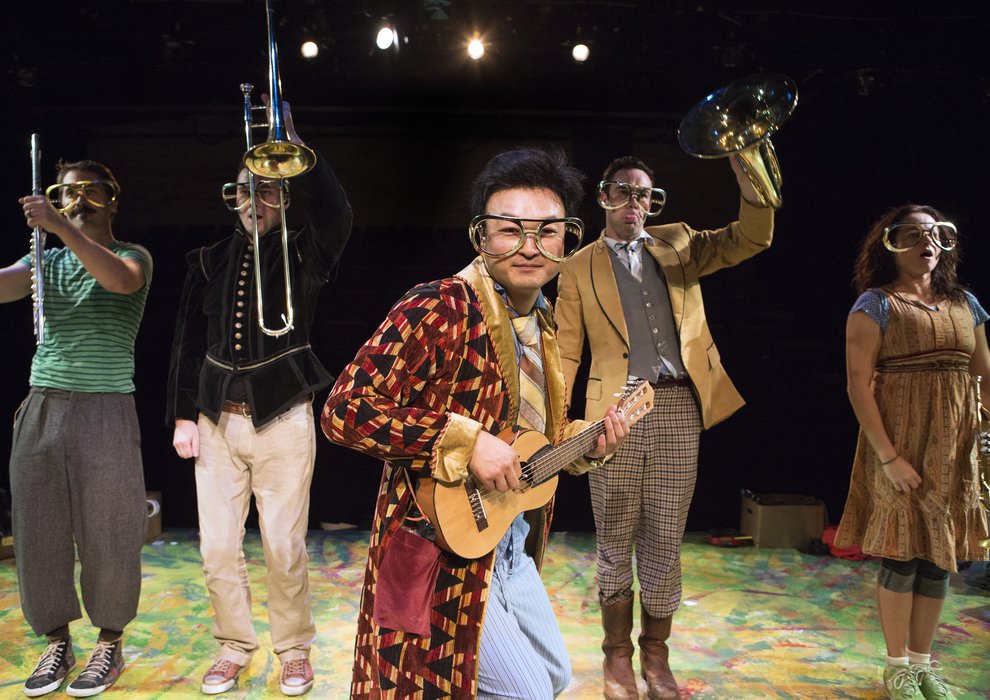 The cast of "Alligator Pie" | By Cylla von Tiedemann

I founded Show-Score because my wife and I love theater and needed a better way to discover shows. We especially love repertory theater, where you get to see the same people create and perform in a variety of productions.

That’s why we were curious about this month’s "Soulpepper on 42nd Street" Festival, hosted at Signature Theatre on West 42nd Street.  We hadn’t heard of Soulpepper until we read this great NY Times piece: the inspiring audacity of a Canadian theater company invading NYC with 65 artists who are presenting 12 different shows (in one month, in repertory) was right up our alley.

So far we’ve enjoyed two shows, been thrilled by two different late-night cabarets, and have had the pleasure of getting to know the company’s leadership team.  We’ve decided to see everything they are presenting.  Why?  Because it’s the kind of theater we love to support -- alive, vibrant, and of very high quality. Not everything is to our taste (it’s art, after all) but the energy and chutzpah of the endeavor is infectious.

Since there’s a lot to see, and since we’ve had the benefit of chatting at length with the Soulpepper team, here’s my guide to what’s happening.  We’ve also been able to secure a discount for Show-Score members: use code “S42GEN” (you type it into a small box in the upper right corner of the ticketing page).

(Above: The cast of "Spoon River". Photo by Cylla von Tiedemeann.)

There are three Mainstage productions, which are regular, full-length shows. Each one is very different:

As I said, these are very different productions, all with overlapping casts and creative teams.

These are shorter-run shows, and they cover a WIDE range of genres:

Once again, the variety of these pieces is eye-catching.

These run just two or three nights.  We missed the first one, but already have tickets to the remaining two:

(Above: A scene from "A Brimful of Asha". Photo by Erin Brubacher.)

We’re excited about all three of these:

Finally, don’t miss the FREE cabaret, which happens most evenings and some afternoons. It’s different each time.  Signature Theatre’s space is tailor-made for this -- after your show, grab a table or stool, a drink and a snack, and settle in for 40 minutes of fun.  It’s hosted by the Albert Schultz (the company’s artistic director), and it features songs performed (and sometimes written) by company members.  It feels very homespun and authentic -- like you’re inside the company’s living room, watching them hang out and have fun with each other.  Best of all, you can chat with everyone after the show (which is how we got to know so much about the festival).

Bottom line -- if you love theater and live near NYC, grab some tickets to this festival now.  I’m pretty sure you’ll have a great time, and you’ll be supporting a worthy and exciting initiative by Toronto’s leading theater company.

If you've already been to the NYC Festival, or know Soulpepper from Canada, feel free to chime in with tips for the folks who are Soulpepper "newbies" like me!

Tell us in the comments! And don't forget to use the promo code "S42GEN" when you buy tickets. (The code goes in the box in the upper right corner).