One talented artist and avid musical fan certainly didn't throw away Her Shot for a chance to visit The Room Where It Happens. 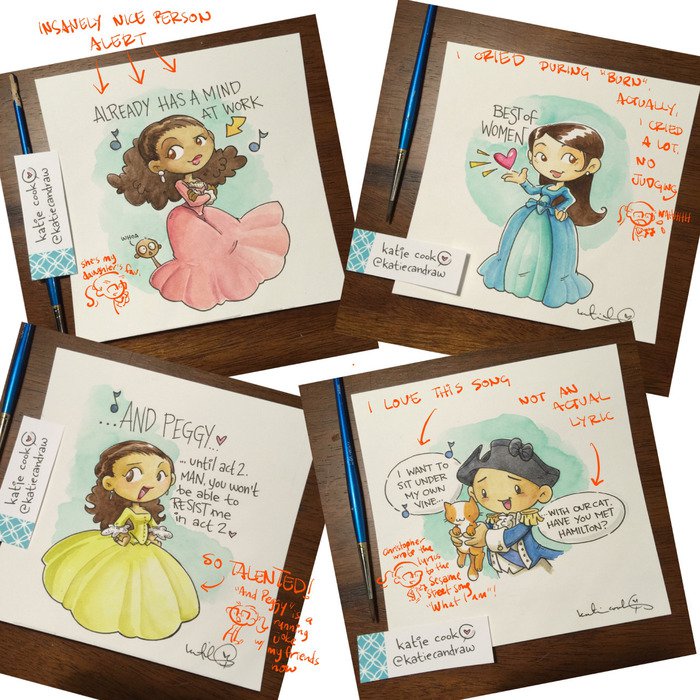 Last Friday night, along with hundreds of other lucky theater-goers, Show-Score member Katie Cook got to see "Hamilton" on Broadway. But unlike those other theater fans, Katie got to experience a little something extra: she met the entire principal cast and went on a backstage tour.

(We'll give you a sec for the simultaneous feelings of extreme jealousy and vicarious joy to subside.)

You see, Katie is not only a Broadway mega-fan, but a professional artist who has worked with Marvel, DC, Star Wars, and more! And when she's not working on projects for clients, she's drawing adorable "Hamilton" fan art.

As Katie details on her blog, a "Hamilton" cast member spotted the drawings online "through PURE, DUMB LUCK" and decided a personal thank you was in order: in the form of an offer for Katie and her friends to go backstage!

As for the show itself, Katie told us that "Wait For It" and "One Last Time" were her favorite numbers: "They were just so emotionally charged!"

After the show, the group made their way backstage, and Katie got to see what goes on behind the curtain.

"There were so many rows and racks of serving trays and goblets," said Katie. "It was amazing to see the set from a new perspective. This was my friend's sixth time seeing the show, and she had no clue any of this was going to happen! The look of awe on her face made it so worth it to keep the visit a surprise."

When it came time to meet the cast, Katie went into ultimate fangirl mode. "I consider myself a professional nerd, so it takes a lot to make me fangirl out!" She noted that the entire cast was "very kind and polite," and they all adored her drawings.

"This was also my husband's first ever show," she concluded. "With this kind of experience, I feel like I've ruined him forever!"

We agree that it might be tough to top, but with an intro like that, it seems like he's a newly converted theater fan: the next evening's entertainment? "Something Rotten" on Broadway!