How Is 'Pride and Prejudice' Both Touching AND Funny?

Primary Stages' production of "Pride and Prejudice" is funny, heartfelt, and incredibly theatrical. Director Amanda Dehnert tells us how she balances all those elements in the show. 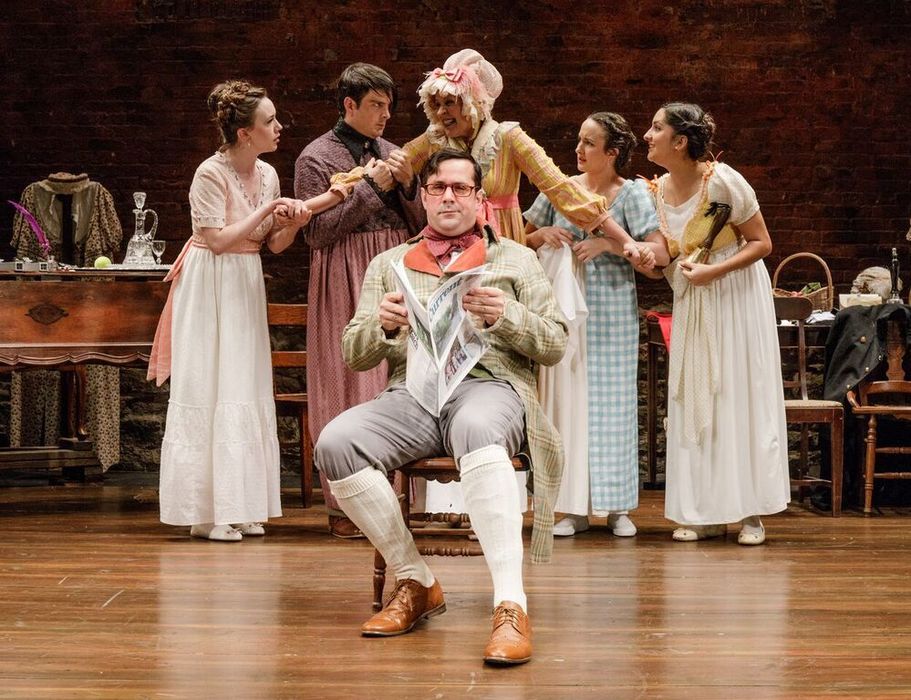 How do you make a classic Jane Austen novel feel like a modern stage play? Trick question! Jane Austen always feels contemporary, no matter what year it is, and the Primary Stages production of "Pride and Prejudice" proves the point.

Playwright-star Kate Hamill teases out the comedy and passion in this story about Lizzy Bennet, a well-to-do-woman who loathes the idea that she's only useful to her family (and the world) if she gets married. Meanwhile, director Amanda Dehnert helps Lizzy's frustrations and desires feel like our own.

Dehnert's production of the play, which Primary Stages is presenting through January 6 at the Cherry Lane, blends broad physical comedy with gentle emotional revelations. It also features rock songs, dance routines, and a running joke about RuPaul. They might be anachronistic, but these touches still somehow feel appropriate in Austen's story of women (and men) trying to control their destinies.

Dehnert and I recently discussed how she nurtured both the comedy and the heart inside the play. Here are the highlights of our conversation.

Mark Blankenship: I was charmed by how easily this production went from silly to serious and back again. Why did you want to include those extremes of comedy and drama?

Amanda Dehnert: That's just how life works, you know? I am capable, as a human, of falling down a flight of stairs because I'm not paying attention to where I'm going. And I'm capable as an actor or director of making that be funny. But even on the same day, I have plenty of interactions that aren't at all about tripping on things. People cover a big spectrum! Allowing all those things to exist in the same evening of theater is important. It comes back to understanding human behavior and the extremes that we're always capable of.

MB: That makes me think about Mr. Collins, Lizzy's slimy cousin who turns up and declares he's going to marry one of the Bennet girls. He was mostly off-putting, but then he had that hilarious bit in the first act where he kept falling out of his chair.

AD: Yes! He says, "I've come to select a wife," and if you think about what that really means, it's kind of awful. And yet we want to be able to find the humor in it. We want to be able to laugh at the guy. So it's important to let the character breathe a little bit and be a fool in the comic sense. You can easily say, "He's an idiot! He's a fool!" in the dramatic sense, because he's quite full of himself. But he also needs to be a clown. Mark Bedard (who plays Mr. Collins) is an amazing physical comedian, and he has created this event where we really get to understand that the character is naive in his own bizarre way.

MB: Jane Austen's novels are great at that, too. She always makes you see a character's extra dimensions. It makes her novels feel modern to me.

NOTE: This interview was edited for length and clarity.