Jersey Boys: Everything You Need To Know About How to See it

Learn everything you need to know about how to see Jersey Boys at Show Score: learn the plot behind this unique and successful show! 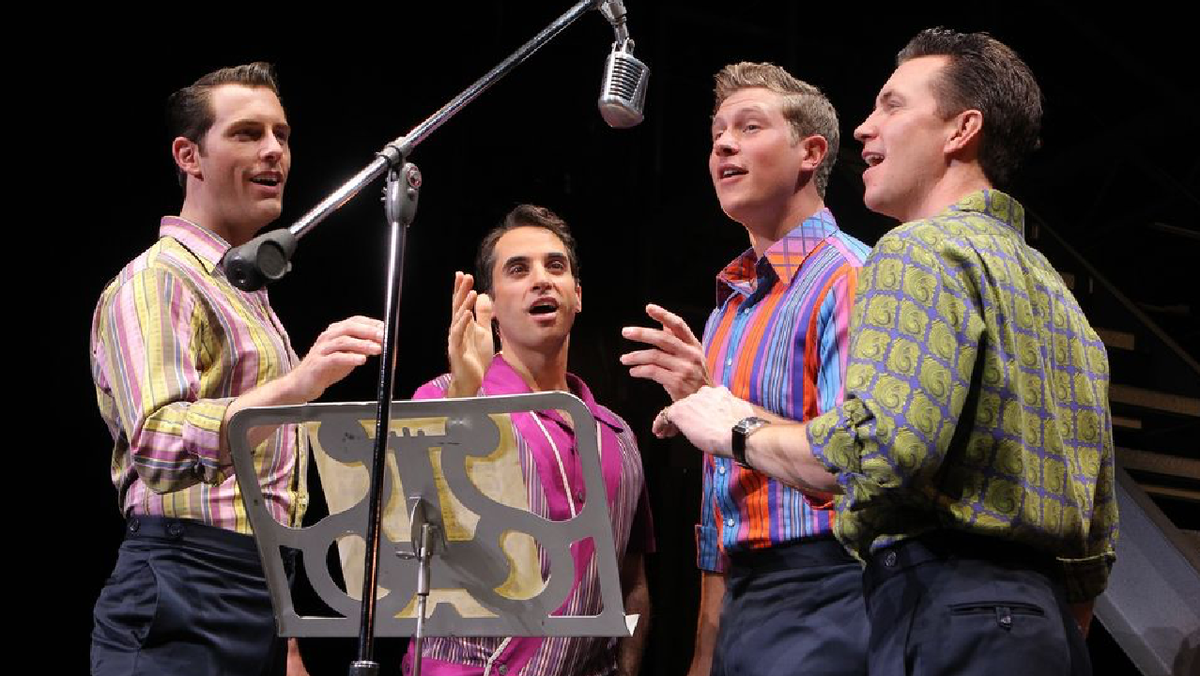 Earlier this month "Jersey Boys" Broadway bid adieu to a number of beloved musicals on the Great White Way, including the long-running fan-favorite "Jersey Boys". Though the Tony Award-winning musical dimmed its vibrant lights after an outstandingly successful eleven-year run at the August Wilson Theater, it does not mean the "Jersey Boys" show is out of our lives forever! There are plenty of other ways for fans to still get their Frankie Valli and the Four Seasons fix aside from sitting around waiting and wishing for a revival that might not come until 2057 or beyond.

It's not hard to see the appeal of the "Jersey Boys" play: the show tells the story of Frankie Valli and the Four Seasons, an incredibly popular music group that got their start in the '60s. "Jersey Boys" goes into the history behind how the four members met, and their subsequent struggles. A true jukebox musical filled with hit songs from the band itself, the "Jersey Boys" musical is an absolute delight from start to finish. Catch a production and try not to sing along... we dare you!

Show-Score members absolutely loved "Jersey Boys" Broadway, giving it a score of 88 and calling it the "mother of all musical biopics" and a "fun, high energy jukebox musical". With more than 3,700 reviews from real theatergoers, it's clear that this show was a popular Broadway hit, and its absence on the Great White Way will definitely be missed.

If you're still craving something similar to the "Jersey Boys" play, we'd like to recommend "Beautiful: The Carole King Musical"! This inspiring jukebox show shares many similarities with "Jersey Boys", as it tells the story of singer Carole King and her rise to superstardom. It's a great pick for Broadway fans who are missing "Jersey Boys" and would love to check out another show filled with popular tunes and engaging characters.

The easiest way for theater-goers to get their hands on a ticket to the "Jersey Boys" show in 2017 would be by hitting up the show in one of the 17 cities it’ll be traveling through on its North American national tour. Beginning the second week of February, the "Jersey Boys" musical national tour kicks off in McAllen, Texas, where it will stick around for a few days and later head to Jacksonville, Florida, then back to over to Texas, and then up, down, and across the United States and Canada, where it will finally wrap up in Vancouver in November 2017. Sure beats waiting for a "Jersey Boys" Broadway revival!

For those who don’t live in North America and find the West End is closer to home or just more their vibe, the "Jersey Boys" musical has been running at the Piccadilly Theater since 2014, after transferring from the Prince Edward Theater, where it had been running since 2008. Playing to packed-out houses, the Olivier Award-winning musical doesn’t seem to be going anywhere for a very long time. Might be a great opportunity to make the trek across the pond to see the spectacular show!

Towards the end of 2017, audiences will also be able to see this show about the four dudes from New Jersey who made their big break throughout the United Kingdom. A new national tour will be kicking off in Birmingham at the New Alexandra Theater in December. Though no other touring locations have been announced at this time, people interested in purchasing tickets or learning more information can follow them on social media to stay up-to-date!

If theater fans are unable to make it to any of the touring stops, there’s still other ways to catch the "Jersey Boys" play, and they don’t even need to leave their home! Though it’s not the stage production, Clint Eastwood directed the movie version of the acclaimed musical in 2014, and it even stars John Lloyd Young, Broadway’s original Frankie Valli! There’s also the cast album, where fans can listen to cherished songs such as “Big Girls Don’t Cry”, “December 1963 [Oh, What A Night]”, and “Can’t Take My Eyes Off You” as many times as their heart desires.

No matter where you live —whether it’s New York City, Des Moines, Calgary, the United Kingdom - a production of the "Jersey Boys" musical is just a hop, skip, and a jump away!