Keeping Score: An Interview with 'Los Otros' and 'Come From Away' star Caesar Samayoa

The actor talks ending his eight-year journey on 'Come From Away' and standing center stage as a main character in a new musical, 'Los Otros.' 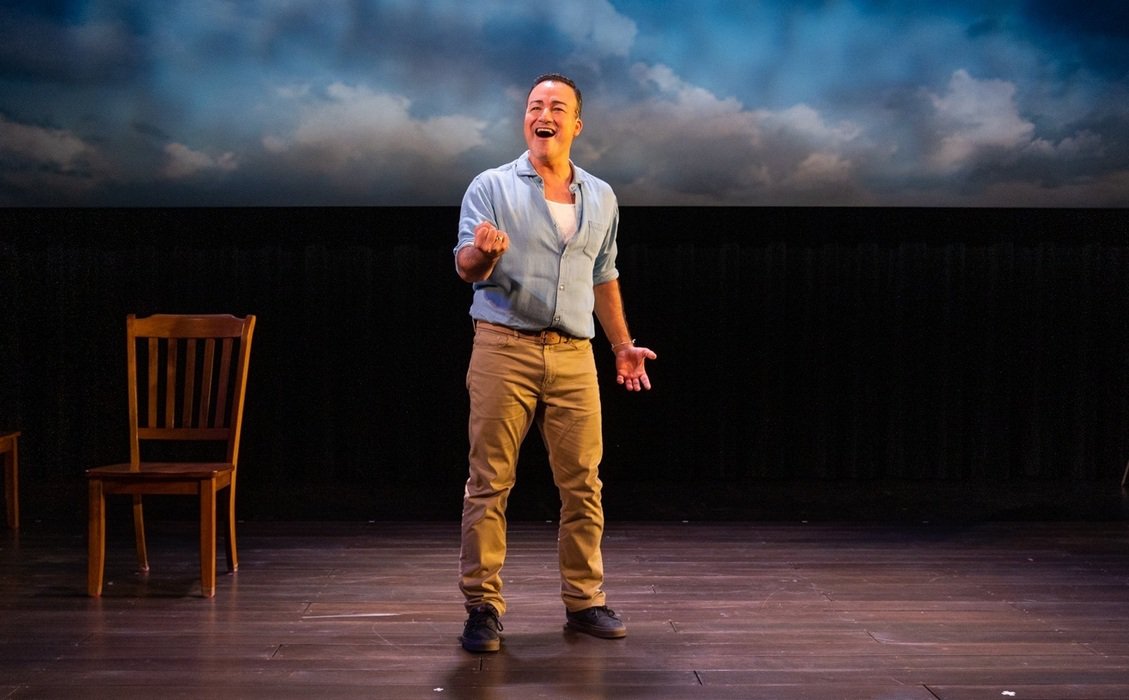 For Keeping Score, we caught up with Come From Away (92) Original Cast member Caesar Samayoa, right after the Opening Night of his newest show - Los Otros (79), a new musical by Michael John LaChiusa and Ellen Fitzhugh.

We discuss his love of theatre, his favorite shows, and why representation is important on stage now more than ever.

This interview has been edited and condensed for clarity.

Show-Score: So Caesar, let's start at the very beginning (a very good place to start). What brought you to working in theatre?

Caesar Samayoa: It was a teacher that introduced me to theatre. This was not really part of our world, you know, anything in terms of Broadway or live theatre. And one of my teachers in grammar school brought us to a show and I, almost instantaneously, felt that feeling: “wow, this is what I want to do with my life.”

So, I started becoming involved with every kind of performing arts organization that was available to me, but I never thought that I would actually pursue it. My parents were very much pushing their children to go into very stable kinds of jobs and careers. And after my first year of school studying something else, I realized that friends were being trained as actors in conservatory acting programs. I saw Anna Deavere Smith do Twilight: Los Angeles 1992, and I just knew at that moment that this was what I was going to be doing with my life. I applied to different conservatory programs, and I got accepted and started really training as an actor, and I've never looked back since.

What shows would you recommend right now? (Besides, Los Otros, of course)

The Kite Runner (84), I thought, was just gorgeous, gorgeous, gorgeous storytelling. I love shows that are kind of simple, beautiful, human stories. And I also love the really theatrical magic stories. Something like Hadestown (91), where you see something that could only happen in the theatre happening in front of your eyes— the way that stage is used, and the way the characters come in and out is magical. So I love something like that, too.

What are some of your favorite shows?

Gosh, this just ages me, but I love it. I remember I was tiny, and PBS had one of those recordings of Sweeney Todd - the original Sweeney with Angela Lansbury. And I shouldn't have been watching it. I was terrified of everything that I was seeing, but I was so enraptured. I just could not believe what I was watching. You know, this incredible story! I was swept away by the music, the actors, the theatricality, the grandeur of it all.

I'm really moved by pieces like Twilight: Los Angeles 1992, where you get to see an actor transform on stage. Actually, the first piece I did in New York is called Shakespeare's R&J, and it's a version of Romeo and Juliet where four actors play all the roles. And I played Juliet, Benvolio, and Montague. I'm really drawn to pieces where you get to see an actor really dive into their craft and just completely transform in front of your eyes. Kind of like what we got to do in Come From Away, and kind of like what we get to do in Los Otros, as well.

And you just came off of your run on Come From Away, right?

Yeah, I just finished almost eight years working on Come From Away.

Wow, eight years! What is it like going from working on Come From Away, as long as you had, to working on Los Otros?

I'm so thrilled that Los Otros is the piece that I got to work on. You know, I went from a heavy ensemble piece to, basically, a one-man show. Luba and I, basically, do one-person shows and we come together at the end. And it’s just what I love about the artistry of really good theatre. It all came together in this one little piece, working with Michael John, and working on Ellen's script -  which is so rich, and so full, and so human- on stories that I find deeply personal… It was the perfect transition from Come From Away.

I had to really retrain myself to go back into rehearsal and to develop a new show and develop a new character and for the amount of work that goes into this. It's shocking, you forget how hard this stuff is. Doing Come From Away is tiring, because you never leave the stage, but your body gets used to it. It becomes part of your every day — your body starts conserving energy so you can have the exact amount of energy you need to do that performance. Because it's so used to what it needs.

Both Los Otros and Come From Away are based on real life happenings. Is there something about performing true stories that particularly speaks to you as an artist?

I love it. I love knowing that someone's life gets to be shared with so many people. And I think what's beautiful with Los Otros is that these two characters are really everyday people. You know, it's, it's everyday people that a lot of people can connect with. And, we get to share that with the world to say, “this is also important.” You don't have to show this massive, kind of, event on stage, you could show someone's everyday and people can connect with it. And I love that.

There are many aspects of Carlos’ story in Los Otros that I connect with deeply, and that remind me of my history and my family's history. So being able to share that is really beautiful.

And also, I consider myself a singer. But for some reason, the shows that I get cast in, I don't get to sing a lot. And I get to sing in this. And it feels amazing to use that part of myself in a live performance.

What do you want people to take away from Los Otros?

I want people to open their eyes a little bit to the immigrant experience in the United States. To the very deep feelings that immigrants have had about assimilation, about who they are in this country, about whether they're enough. Also, the show has a beautiful theme about connection with people, and how important telling your stories may be, whether you think it is important, whether you think it's special, and how simple connection to another human can be.

Representation in the theatre is extremely important. How do you feel, as a Latine artist, to be bringing a Latine character to life as a main character in a new musical?

When I was little, and I was watching shows, I never saw myself represented on stage. Never. I just never saw it. I can't tell you how many shows I went to throughout my childhood and did not see a Latino actor that I could look up at and say, “Wow, that's me. That's somebody that I can be.” So now to know that people like my nieces and nephews have the opposite experience and that they're coming to the theatre and seeing their lives played out? I love that our stories are finally being told and being put on to the stage. It's so important for us. That's the only way we're going to move the needle forward. It’s the only way.

Is there anything else you would like to add?

I’m just so excited about this time in theatre, you know, coming out of this pandemic, a kind of horrific shutdown that stopped art for so many of us... And then we started finding our way through it, which I found so exciting. Like art can never die.

But as people started finding a way, new voices really started clawing their way through. And it's time for our voices to be heard. It's time for so many marginalized sections of our society to finally have a place at the table. So, I'm excited for what's coming.

For more information about Los Otros, like how to get tickets, and to read what critics and our members think of the new musical, head over to Los Otros's Show-Score page by clicking here!
Previous
Next