Show-Score | By Chris McKittrick | Mar 21, 2017
Seeing 208 shows a year is no small feat! This member does just that practically EVERY YEAR. We sat down with AmyAmyAmy63 to see just how she does it, and what inspired her to see so much theater! 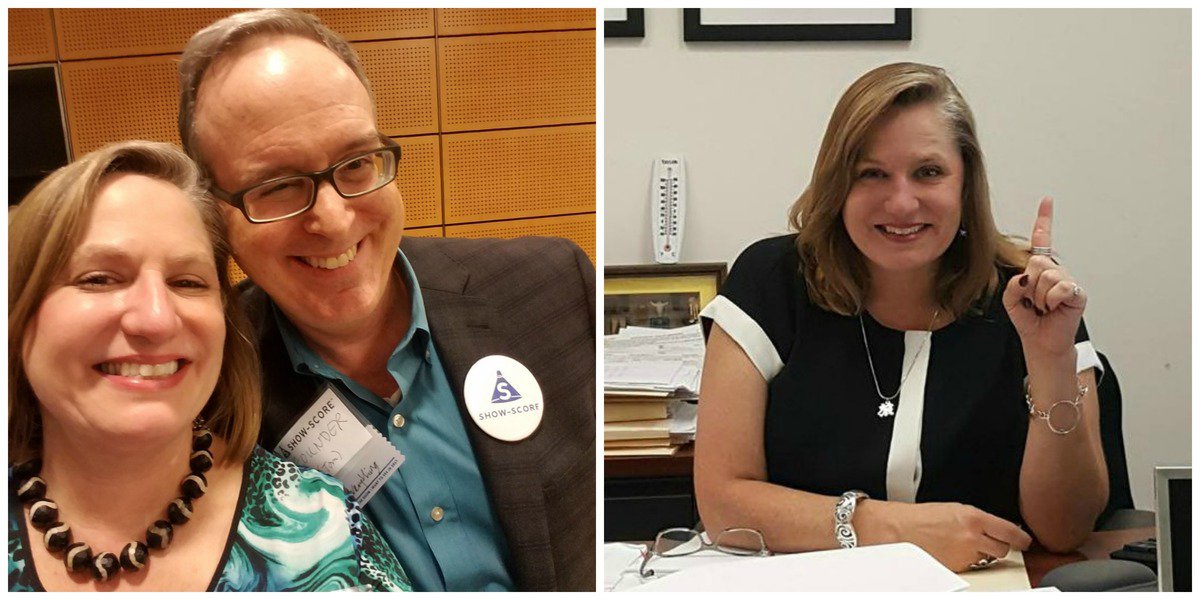 Amy and Tom | Amy in the work place | By Amy Leissner

If you’ve ever browsed Show-Score member AmyAmyAmy63’s reviews, you might’ve noticed that she posts about four reviews per week. And not just in one week, nearly EVERY week. In fact, Amy saw 208 shows last year. How can one person see so much theater?

Amy jokes, “I fear I am a wee bit addicted!”

If Amy’s obsession with theater is indeed an addiction, it is a lifelong one -- from a very early age, Amy was hooked on live performances. She recalls, “I was born and raised in a small city in south Texas, which had a relatively rich cultural and arts scene for its size. My parents were part of an arts council that brought Pavarotti, Itzhak Perlman, Beverly Sills, the Bolshoi Ballet and more for performances in our town's college auditorium, and they took me and my six brothers and sisters to everything.”

Amy and her family; the inspiration for her "addiction"

Those unforgettable experiences kindled an interest in theater, “I participated in high school and community theater, studied theater for a year and a half at the University of Houston, spent a semester in London where I reveled in the generous Student Rush policy  -- 5 pounds to see Dame Wendy Hiller, or Albert Finney, or a new Tim Rice musical called 'Blondel', and I saw that one twice!"

Of course, seeing so many shows comes at a cost. Amy relies on being an expert in all the ways to find discounted theater tickets, adding, “I manage to find lots of discounts, I subscribe to several theaters, and Show-Score has been the Holy Grail!”

Amy is particularly impressed with the quality of the performances on New York stages. She says, “I just love how it’s practically impossible to see a bad performance here because there’s so much talent. That's not to say that every play is great - some aren't - but inevitably the performances are just terrific.”

If you're looking for Amy, you can find her in the audience, or just outside of almost any New York Theater!

A lifetime of seeing theater is full of memorable experiences. One of her favorites is also one of her first times experiencing Broadway. She recalls, “During the summer between the year I graduated high school and started college, I took a bus trip with a national high school theater club, Thespians, to New York  -- yes, Texas to New York and back on a bus -- with a stop at the National Thespian Convention at Ball State University. We had rear mezzanine tickets for "A Chorus Line" and then next day for" Amadeus" with Frank Langella. As you can well imagine, I was beside myself.”

Amy continues to make memories seeing theater in New York --  as she jokes, “I spend all my money on rent, pet food and... theater! Who needs to eat?”

Have any incredible feats in theater? Let us know in the comments!