Show-Score member Carrie is an avid theater fan: both on the stage, and in the aisles! 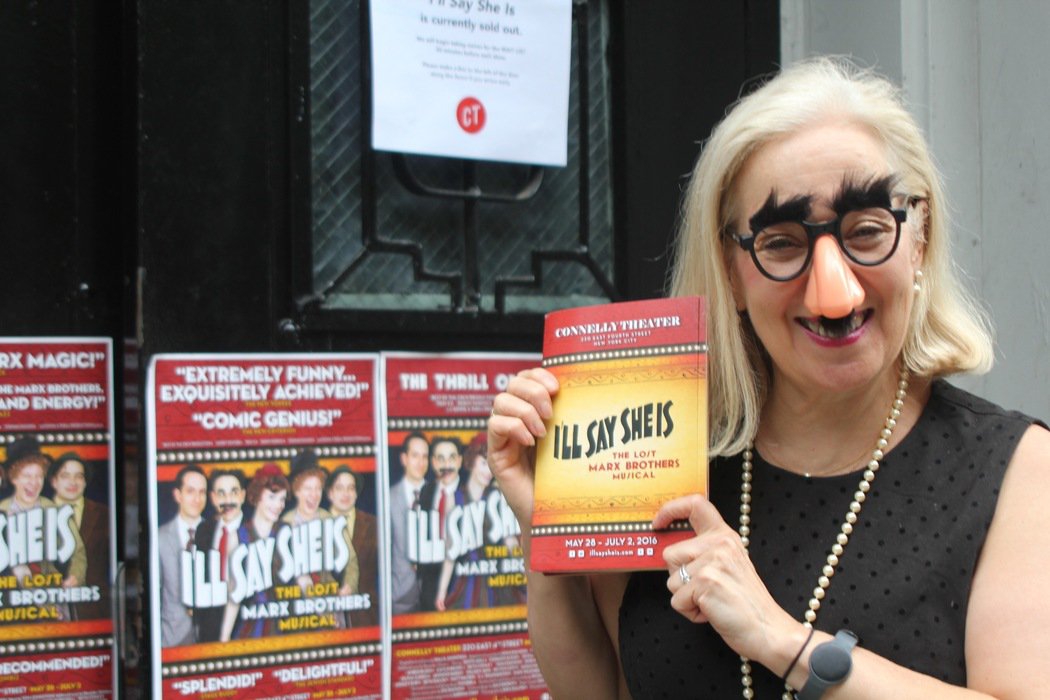 Carrie at the Connelly Theater | By Show-Score

Outside the Connelly Theater in Manhattan's East Village, Show-Score member Carrie is wearing a pair of Groucho-style glasses and a string of vintage pearls. The curtain is due to go up that evening on another performance of the lost Marx Brothers musical, "I'll Say She Is", but Carrie isn't just a fan who dressed up in the spirit of the show.

"The standard usher dress code used to be black and white attire," she tells me. "Now, it's all black. The only theater without a dress code that I've come across is actually this one! For tonight, they just asked us to wear '20s clothes and gave us these glasses."

(outside the Connelly Theater)

A former actress who previously appeared in "Oliver!" with Patti LuPone, Carrie is no stranger to working at the theater. After appearing in three Broadway productions, she got married, settled down, and left the hectic life of a performer to raise her child... but she couldn't completely keep away!

Nowadays, Carries finds herself ushering almost every night, volunteering at what she estimates to be a good 20 or so theaters! She tells me that her friend was the one who "turned her onto this ushering stuff," and soon after that, she found herself signed up with pretty much every off-Broadway theater in the city.

(Carrie poses with a program)

"It’s getting harder to get usher gigs because everyone is catching on to how great it is!" says Carrie. "You have to be at your computer when that volunteer offer comes out, and very often you miss it if you don’t respond immediately." She says she's fortunate to have a day job at a computer most of the day, working alongside her husband at an accounting firm, but admits that sometimes it helps to have connections.

"I’ve gotten friendly with the house ushers, and some of them like me so much that I get first dibs!" she adds.

As an usher, Carrie has had some unique experiences, like seating Oscar-nominated actress June Squibb (which made Carrie "a little starstruck") and seeing amazing theater for free. As a volunteer usher with Roundabout, one of the only Broadway theater owners that currently allows volunteers, she was even able to snag a third row center orchestra seat for "She Loves Me"!

And how does Carrie sum up her thoughts on ushering? "It's a pretty great way to save $80 and see a show!"