We love reading your reviews, but now we want to see your Playbill pictures. We asked our Show-Score community what they’ve been seeing. Here’s a select few from this past week on Broadway and Beyond! 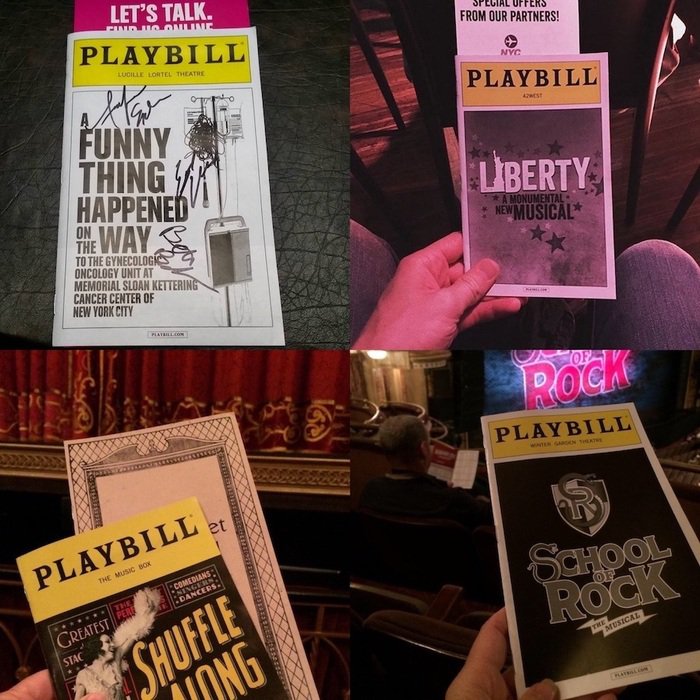 With a show score of 89, it's clear that members are loving "She Loves Me"! Show-Score members White Rabbit and Luciano_S were both in attendance this weekend. Luciano_S even managed to snag a signed Playbill: how many of those signatures do you recognize?

Luciano_S also caught a performance of "Fiddler On the Roof",  and snapped another signed Playbill pic! (Can you spot the signature from a 2016 Best Actor Tony nominee?)

Show-Score members Anna DeWitt and PeanutGallery both ventured to the world of Oz: they saw a performance of the spellbinding "Wicked" [93] and off-Broadway original "The Woodsman" [85].

Show-Score member Lynn S 6092 shared a ton of great Playbill pics with us this week, featuring some excellent Tony-nominated shows! Here are some of our favorites, including 'Eclipsed', a signed edition of 'Bright Star', and the closest most of us will get to seeing 'Hamilton' this week (or ever).

Scoopington sent us this pre-performance pic from 'Les Mis': his member bio might say that his favorite show is 'Rocky the Musical', but it looks like 'Les Mis' might be a contender!

(via Scoopington)
And in the land of Beyond Broadway, member Anna DeWitt caught one of the last performances of comedian Mike Birbiglia's solo show, 'Thank God for Jokes'!

Earlier, we showed you some of the pics that Show-Score member Lynn S 6092 sent us after seeing nine shows in nine days! Here's a few more to add to her already impressive collection: "Waitress", "Shuffle Along", and "School of Rock".

Michelle D 6138 sent us a great ticket shot from when she saw "Turn Me Loose": she called the show a "must see," and said she's even going back a second time with friends!

Lukemeyer submitted this pic via Instagram after enjoying a Member Night at "Liberty: A Monumental New Musical". Be sure to follow Show-Score there at @show_score!

And lastly, Show-Score member Luciano_S enjoyed "A Funny Thing Happened..." so much, that he even got his program signed!

What theater did you see this weekend? Don't forget to share your Playbill pics in the comment sections if you'd like them included in next week's roundup!