REVIEW ROUNDUP: “Girl From The North Country” Opened with a ShowScore of 79 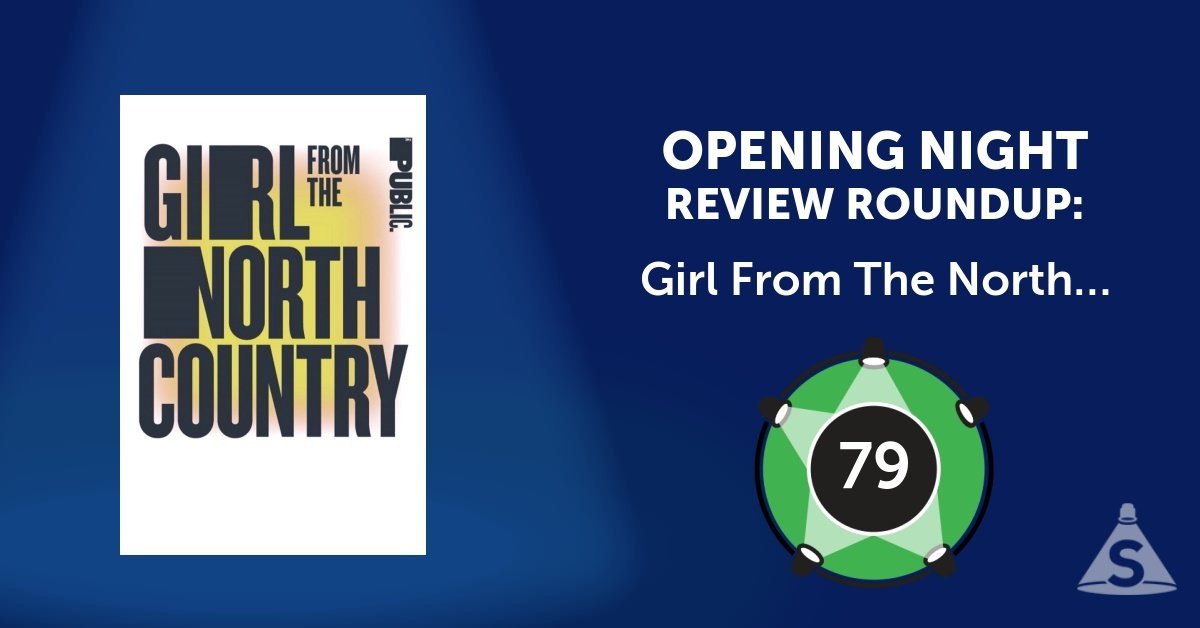 “Girl From The North Country,” written by Conor McPherson with music and lyrics by Bob Dylan, opened on October 1, 2018 in New York City.

20 critics reviewed the show, resulting in a weighted average of 76.

Ben Brantley
The New York Times
ShowScore: 90
"A rich and strange marriage of the talents...If you’re a hard-core Dylan fan, you’ve heard these songs before. But, for me at least, they’ve never sounded quite so heartbreakingly personal and universal at the same time...The most imaginative and inspired use to date of a popular composer’s songbook in this blighted era of the jukebox musical...A uniformly excellent American cast that wears its roles like confining and prickly skins."
Zachary Stewart
Theatermania
ShowScore: 90
"An extraordinary musical, unlike any currently playing in New York...Hunger rumbles off the stage in McPherson's urgently staged production, with earthy, emotionally raw performances from the entire cast...By incorporating its big, contemplative set pieces into a difficult, complicated story of American life, 'Girl From the North Country' draws on the deeper traditions of opera and American folk music to create something that feels avant-garde by the current standards of Broadway."
Jonathan Mandell
DC Theatre Scene
ShowScore: 65
"A slow, sad, elliptical and occasionally exquisite theater piece...The odd pairing of McPherson’s scenes of hard luck lives with Dylan’s songs of yearning, delivered by a splendid 17-member cast, work better than you might expect, but not as well as you might have hoped...The playwright...seems more interested in presenting a community than in focusing on individual characters...The saving grace are the songs, aided by Hale’s orchestrations and the performers’ powerhouse singing."

The show was also reviewed by 75 Show-Score members, whose collective ShowScore is a weighted average of 80.

Emily_Beth, ShowScore: 91
See it if…"You like shows with music tangentially related to the story, or you want to hear Dylan's songs EXQUISITELY performed by jaw-dropping talent."
Don't see it if…"You need a clear connection between songs and storyline. It's more 'Once' than 'Fiddler.' It's a parable of a family during the depression."
Buddha-Pig, ShowScore: 80
See it if…"You want to see a cross between 'Once,' 'Spring Awakening,' and the darkest episode of 'Prairie Home Companions News From lake Wobegon' EVER."
Don't see it if…"You dislike Bob Dylan's lyrics. The orchestrations are light-years away from Dylan's own but the lyrics are intact."
Jenna the Musical, ShowScore: 92
See it if…"You love more intimate musicals a la 'Band's Visit.' It helps to like Bob Dylan's music–with this show you'll hear it done in a whole new way."
Don't see it if…"You're expecting a traditional jukebox or bio-musical. This is more a play with music but it wows."