How did you describe the Tony nominees for plays and musicals in the New and Revival categories? We crunched the numbers (well, words), and discovered some interesting insights... 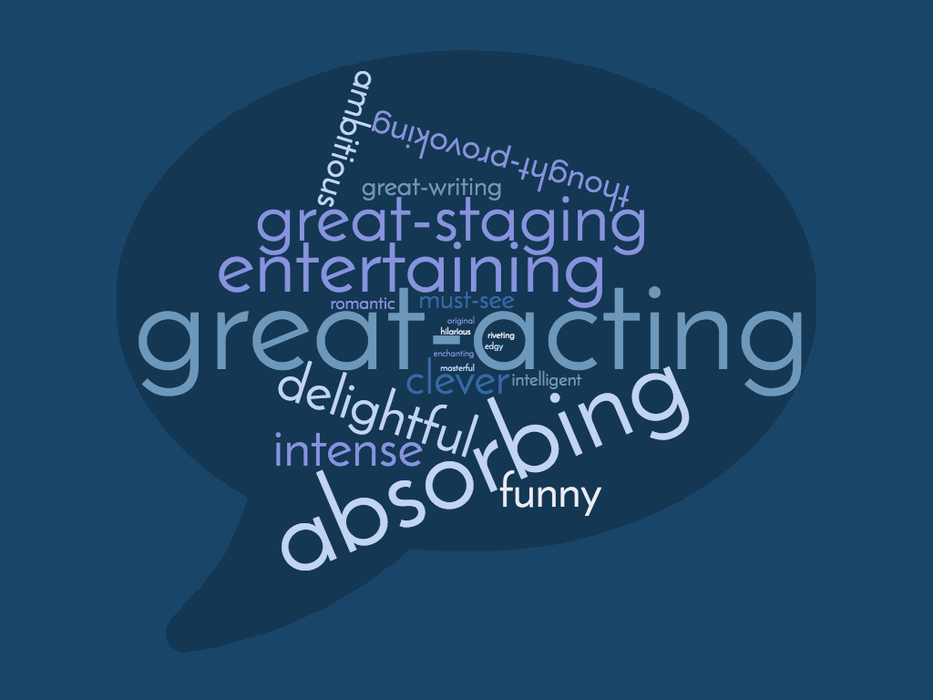 It may not surprise you learn that Show-Score members love this year's Tony nominated shows, but when you start to look at the reasons why those shows have been scored so highly, you can find some common (and not so common!) threads.

The most-used adjective? It doesn't matter if it's a musical or a play: nearly every show (15 out of 18) was praised for its great acting. And not far behind that, theatergoers described 12 of the nominated shows as absorbing.

Other common words included entertaining, great staging, delightful, and intense, further proving that Show-Score members want shows that not only entertain, but leave a last impression worthy of a Tony nod!

A handful of highly specific words only appeared once, revealing just what makes these shows unique to their audiences. Several shows may be funny, but only "Noises Off" gets the distinction of being hilarious as well! "She Loves Me," had audiences under an enchanting spell, and "Bright Star" was singled out for being original.

Best Play nominee "Blackbird" was hailed as edgy, while revival "A View From the Bridge" had theatergoers in awe of this riveting production. One nominee was even called masterful: and that would be "Long Day's Journey Into Night."

It's also interesting that the show with the highest amount of acting nods ("Hamilton," with 7 nominations) was one of the three shows not singled out for great acting by most members! "She Loves Me" and "Bright Star" are other examples of this: these musicals might all be nominated in acting categories, but to audiences, other aspects of the productions stood out even more.

And while fans called out the great acting in "Spring Awakening," the Tony nominating committee thought otherwise: it was the only nominated show not to receive any acting nods.

Similarly, members mentioned the great staging in eight different productions, including "Bright Star", "Fiddler", "Spring Awakening", "The Color Purple", "The Father", and "The Crucible". But the committee only chose two of these — "Shuffle Along" and "A View From the Bridge" — for set design nominations.

What do you think of the nominations? Do the words our members use to describe these shows resonate? Let us know in the comments!