Show-Score | By Robbie Block | Apr 12, 2017
Memories can be hard to hold onto. They aren't something you can simply wrap with a bow and keep in a drawer. But, thanks to The Lights of Broadway trading cards, you can now encapsulate your memories in a wallet-sized card. Learn all about this fun way to celebrate your favorite shows, artists, experiences, and more! 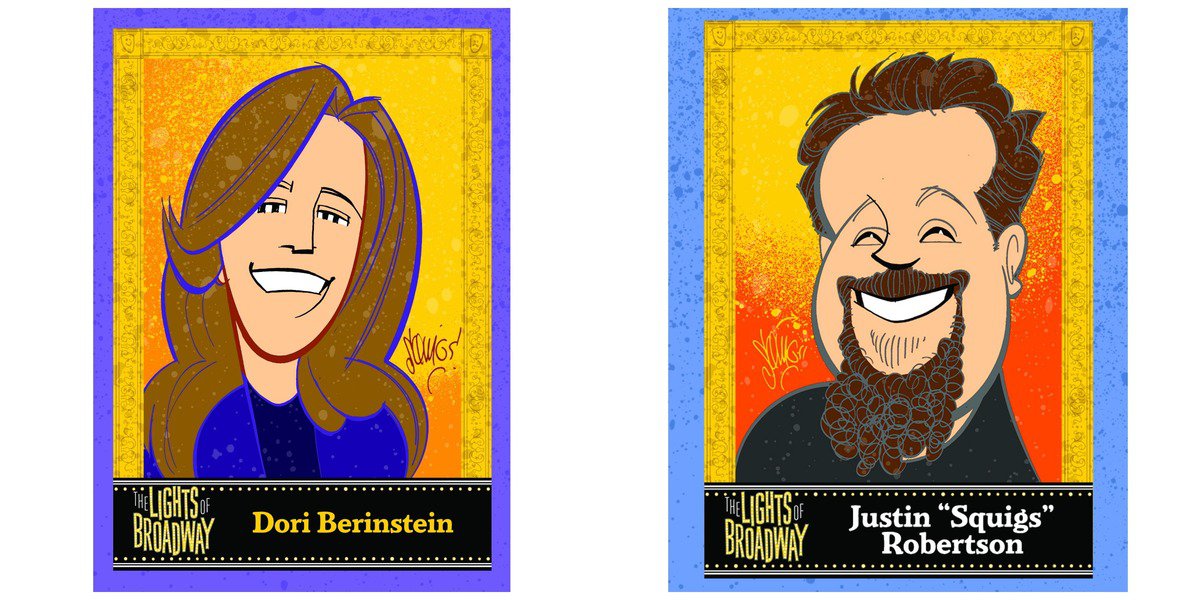 The Lights of Broadway Showcards pay tribute to the new and notable on Broadway, as well as the legendary and revered. Actors and actresses, writers, directors, designers, personalities, organizations, theaters and related locales, theater lore, traditions, and tall tales. So many possibilities!

We are excited to be partnering with The Lights of Broadway team to offer our very own Show-Score card!

Our Show-Score card is being offered exclusively here in our store and will be included free with each pack of Lights of Broadway cards you purchase!

We had the pleasure of talking with Dori Berinstein and Justin "Squigs" Robertson, the creative minds behind Lights of Broadway. Read what they had to say about how The Lights of Broadway came to fruition and more below!

﻿Dori and "Squigs", the creators of Lights of Broadway

Show-Score: Where did the idea for the cards come from?

Justin "Squigs" Robertson: We both collected baseball cards as kids and we both have used trading cards in previous projects. As an actor, I draw caricatures of my fellow cast members during each show I’m in, and while in "Damn Yankees" in 1996, I drew my cast members as baseball cards.

Dori Berinstein: We both loved the idea of creating Theater Trading Cards to celebrate all things Broadway...the shows, the stars, the creators, the legends, the lore and all the people, organizations, charities behind-the-curtain that come together to create theater magic. We also loved the idea of raising money for charity….BC/EFA and The Actor’s Fund in particular.

S-S: How did you two meet each other?

JSR: I’ve had a table at the BC/EFA Flea Market for a number of years, and one year Dori’s kids saw my work and each bought a print. Their dad Mitchell saw them and commissioned a new piece of art for Dori. Then Dori invited me to lunch at Sardi’s where one of the first things we talked about was Broadway trading cards.

DB: I’ve been a huge fan of Squigs and his work for years and years. His art is stunning. It so magnificently captures the joy, energy, passion and creativity of Broadway.

S-S: Why do people like to buy these cards?

JSR: I think it’s because they’re something small that represents something big. I mean they’re easy to collect (and display and store) but they stand for the big passion many people have for the art form and practitioners of Broadway theater (and the community of those who feel the same way).

DB:  Theater is so ephemeral. You see something magnificent...and then it’s over. The cards are a wonderful memory of those times...whether or not you saw the show on Broadway, on the Road, or performed in the show at school. The cards also provide a deeper experience with a show or an artist as the back of every card includes fun background information. And collecting and trading is so much fun!

S-S: How do you decide what to include in each collection?

JSR: It’s always tricky to finalize the roster of each edition. We try to have plenty of content for what will be on Broadway when the cards are released (and lots of opportunity for interaction with Broadway artists of various kinds). But then we also want to include other notable folks, some of whom inspired the artists of today. We want to celebrate this art form as a whole, and that means its history. I mean you can’t honor "Hamilton" without also honoring "West Side Story". And then we also want to show our gratitude for being a part of the community while celebrating it, so we do a lot to single out organizations and charities and more that make this Broadway community spin.

DB:  Exactly! It’s also extremely important to both of us to recognize the incredible work that’s done behind-the-curtain.

S-S: Which cards are the most popular?  Why do you think that is?

JSR: As expected, cards representing the current hot shows are very popular. It’s always a goal to have that content (like the original casts of "Hamilton" or "Dear Evan Hansen"). But also, the shows and actors Broadway fans are fanatical about are pretty varied, so when I can include a John Cameron Mitchell and Steven Trask and make a pocket of "Hedwig" fans happy, that makes me happy too. And there are those artists and shows that are just iconic and get great response. Stephen Sondheim, Bernadette Peters, Patti LuPone. The list goes on and on, but it’s also very individual to the collector.

DB:  Our ‘Kids on Broadway” cards…. (The kids from “School  of Rock”, from “Fun Home”, from “Finding Neverland”, etc…) are wildly popular. And our rare “Give Back” cards, featuring a limited number of cards autographed by Broadway stars, are very highly prized . Artists that have participated include:  Cynthia Erivo, Christian Borle, Kelli O’Hara, Megan Hilty, Leslie Odom Jr., Danny Burstein, etc… In this next edition, we’re thrilled to be able to celebrate Brian Stokes Mitchell, Jennifer Holiday, Josh Groban and the cast of "Dear Evan Hansen". In each instance, we make a donation on behalf of The Lights of Broadway to a charity of their choosing. Also very, very popular...the very rare original Squigs ‘Sketch’ Cards. I’ve been trying to trade for one of those for months!!

S-S: What’s surprised you the most about this business?

JSR: The thing that has surprised me the most – and I think Dori may agree – is the community that has risen around the cards. There’s a core group of collectors (“Lightcatchers”) who have become a little family, whether they live in NYC or across the country. And this feeling of community has spread. So when we have opportunities for charitable events our people have stepped up big time. We also do our best to really listen to our collectors’ thoughts and opinions, so we can make these cards the best they can be.

DB:  Couldn’t agree more. Squigs and I have both been floored by the many, many stories of incredible generosity and kindness shown by our Lights of Broadway Collectors. It makes this labor of love endeavor even more special to both of us.

Love The Lights of Broadway? Check out our store to see what we have on sale! Don't forget, each pack comes with a free Show-Score card only available through our store!