"The Lion King" on Broadway: Everything you Need to Know

Learn everything you need to know about "The Lion King" at Show-Score, from cast to plot, to what made the show unique and successful. 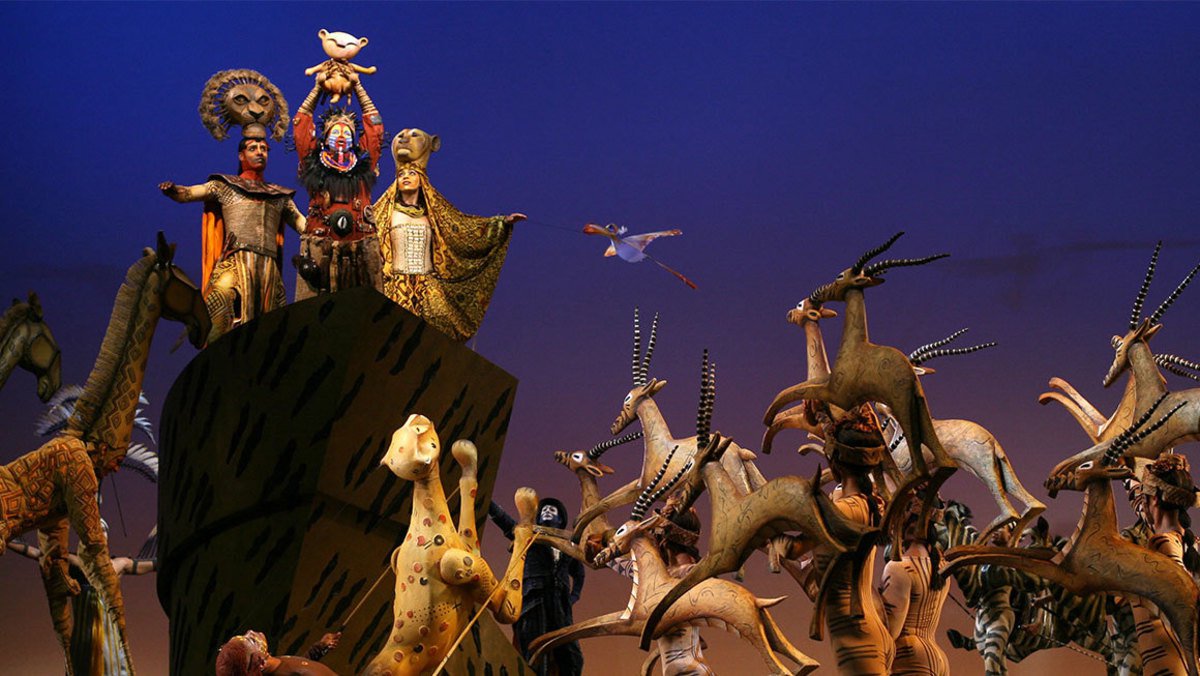 The Lion King on Broadway | By Joan Marcus

And so begins “The Lion King”.

Okay, not really. The lyrics are actually:

But still. You immediately sang along, right? Of course right - “The Lion King” is a widely beloved Disney classic movie.  But what is all the hype about its Broadway counterpart, anyway? Here’s everything you need to know about “The Lion King” musical.

“The Lion King” on Broadway is a musical that is based on the 1994 Disney animated film. The music was written by Sir Elton John and Lebo M, with lyrics by Tim Rice (the same team that wrote the music for the movie), and features choreography by Garth Fagan. The musical, directed by Julie Taymor, is a family-friendly adventure that utilizes actors and dancers in elaborate costumes, as well as large puppets.

The decision to use puppets was in part due to director and costume designer Julie Taymor, as she had an extensive background in puppet theater. She was determined to showcase how each specific character worked and not try to hide the fact that each animal onstage was actually a human, making for a very raw and emotional experience for the viewer. Each costume is elaborately designed, utilizing African textiles, designs, and masks.

When did The Lion King open on Broadway?

“The Lion King” Musical debuted the summer of 1997 in Minneapolis, MN, quickly moving to the New Amsterdam Theater in New York City during the fall of that same year. In 2006, it moved to the Minskoff Theatre, where it still resides today.

"The Lion King" the musical in Las Vegas. Photo by Darrin Bush

The story revolves around a young prince who flees his kingdom after his father is killed under mysterious circumstances. When the prince is old enough, he returns to battle his evil uncle (who has taken control), and win back his kingdom. Sound familiar? Yep, that’s right - The Lion King is an imaginative retelling of Shakespeare’s masterpiece “Hamlet.”

Is The Lion King Broadway musical different from the original film?

The musical is different from the original film in several ways: the character of Rafiki, the wise mandrill, is a female, There are also several added scenes, as well as a few songs that were not in the movie, such as “One by One” and “Shadowland”. But the show still (of course) includes classic songs from the film, like “Circle of Life” and  “Hakuna Matata.”

How long has The Lion King been running on Broadway?

The Lion King Broadway has been running for over 7,000 performances, making it Broadway’s third-longest running musical in history. It holds six Tony Awards and eight Drama Desk Awards. The show has been performed nationally and internationally in places such as Canada, South America, Europe, Africa, Asia, Australia, and, of course, all around the United States. Broadway cast recordings of the show have been recorded by many of these tours, and are available in numerous languages - everything from Japanese and German to French and South African!

“The Lion King” musical has also been running in London’s West End since 1999, making it possible for audiences all over to enjoy this inventive and visually stunning musical!

Seen "The Lion King" musical? Seen it on Broadway?

Score it on Show-Score!