Tags: Standing Ovations
Show-Score | By Kate Farrington | Aug 21, 2017
After 15 years of reading and teaching "Death of the Last Black Man in the Whole Entire World," one theater lover reacts to finally seeing the Suzan-Lori Parks play on stage. 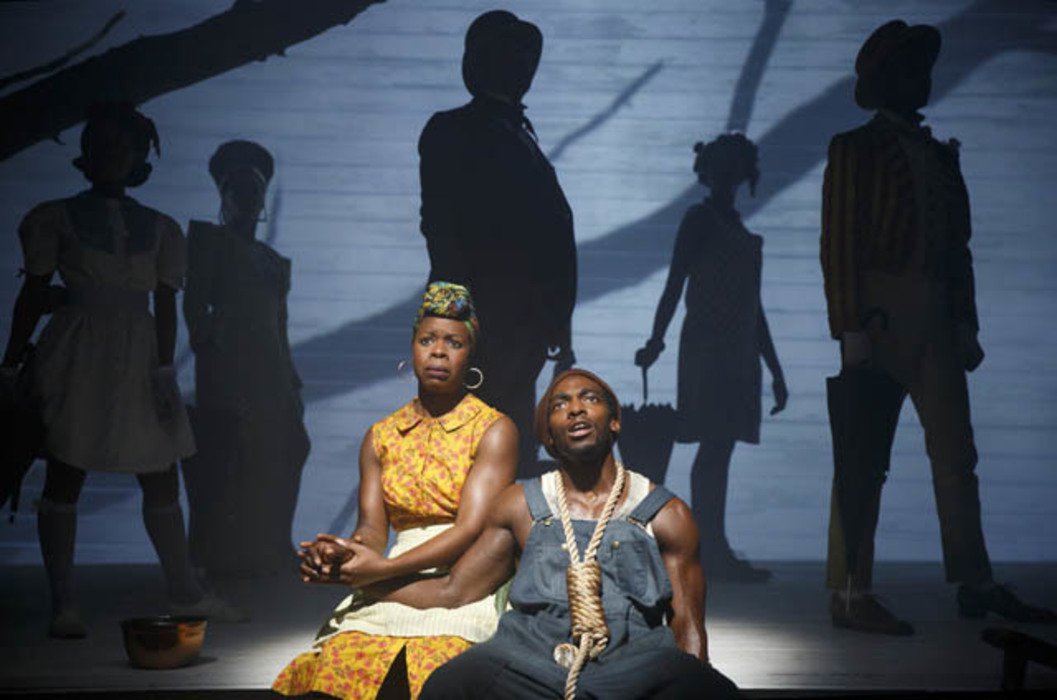 I fell in love with Suzan-Lori Parks’ “The Death of the Last Black Man in the Whole Entire World” 15 years before I actually saw it.

It’s not the first time I’ve read a play and then had to wait a while before hitting a production (I’ve still never seen “The Iceman Cometh”). But this time the wait itself became a journey. I’m pretty sure this play was stalking me.

“Death” is hard to describe. In a surreal series of episodes, the character Black Man With Watermelon describes being treed by dogs, lynched before a crowd, executed in the electric chair—in general being harried and hunted by the world. Surrounding him is a pageant of fantastical figures with names like Before Columbus, Queen-Then-Pharaoh Hatshepsut, and Old Man River Jordan who expand the story (America’s story) into a larger history of oppression.

But nothing about the play is grim or sad. The jazzy poetry of the dialogue, the larger-than-life characters, and the whirlwind pace of the piece don’t leave room for sorrow. Parks has stated that the play is a sort of ritual: a movement from mourning to celebration. So, if it’s about loss and death, it’s about endurance and resurrection, too.

The line that hit me hardest (and still does) is the play’s frequent refrain: “You should write that down.” It’s a reminder that so much of African-American experience has been narrated by other voices. A story can’t be entirely true until it’s told by the people who lived it.

For college-aged me, the line also sparked something I hadn’t really thought of before. As a white middle-class (and pretty sheltered) student in Texas, “Death” didn’t reflect my experience of the world—but if it was the experience of other people in my community and my country, then I should want to understand it. No other play had made me so conscious of what I didn’t know or made me so determined to change that.

So, I read “Death”, loved it, and waited for a chance to see it performed. That’s where the story gets weird.

The first time I read the play was in the wake of 9/11, and I was struck by the global story Parks was telling—the movements of people across the globe (willing or unwilling) and how that shaped our shared history.

The next time I picked up “Death”, I was about halfway through it when Mitt Romney declared that 47% of Americans would vote for Obama because they were freeloaders who wanted to see themselves as victims—a coded racist statement if ever there was one. I looked down at my copy of “Death” and thought how much more work there was to do.

The first time I taught the play at a college in Manhattan was during the NYC protests after a grand jury failed to indict police in the death of Eric Garner. (“I can’t breathe” is another refrain running through the play.) We had an incredibly emotional class. One young African-American woman grew more and more upset as we unpacked the play and its complex layers of meaning and history. “I feel like this is my story,” she said. “Why don’t I know it?” Each time I encountered this text it felt more urgent—and more necessary to how I dealt with what was going on around me.

My long wait to see a production came to an end last fall when Signature Theatre brought “Death of the Last Black Man” to New York for the first time in decades. I immediately booked tickets for myself and my students to attend in mid-November, not knowing exactly how I’d position it in the syllabus, but certain they should see it.

Then the election happened.

With reports of hate speech flooding the news and white supremacists celebrating, here was “The Death of the Last Black Man” again. Time to finally see the darn thing.

Here’s what I learned that night in the theater. I’d always been impressed with the creativity of the play’s structure and imagery. But I hadn’t realized I would laugh out loud at Queen-Then-Pharaoh-Hatshepsut’s Diana Ross diva-ness and the subtle inclusion of Beyonce’s “Lemonade” in the sound-scape. I didn’t know I’d shiver when Bigger-and-Bigger-and-Bigger appeared in a hoodie in an intentional evocation of Trayvon Martin. I didn’t know I’d cry when Black Woman with Drumstick says goodbye (again) to her husband, the two of them exchanging quiet pleas to “Remember me.” It was beautifully acted and impeccably designed.  Definitely worth the wait.

It was particularly satisfying to share it with my students and to hear their responses (everything from “That was amazing” to “How is this play 25 years old?!?” to “I need a drink.”). I’m glad they didn’t have to wait as long as I did.

But seeing the play doesn’t mean that my journey with “Death of the Last Black Man in the Whole Entire World” is over. I started writing this article the day of the Charlottesville tragedy. Here I was, yet again thinking about a play that seems always to be at the forefront of my mind just when I need it most.

But now I can return to the play with the memory of a powerful production to deepen my understanding. I’m so grateful for that.

Two days before I saw the play, I attended a pre-show talk with Suzan-Lori Parks. She talked about the impact the election was having on people’s response to the work, the fact that she hadn’t had to update the text at all to make it more relevant. Someone asked her about the role of the artist in difficult times. I loved her answer: “Be a theater of one. Fill every space with compassion and love. Be the Traveling Show of the Beautiful Thing.” She then added: “SHOW UP!”

Have you seen a show recently that speaks to the current crisis in America? Our members have been having strong reactions to "Pipeline" and "Black Angels Over Tuskegee." We'd love to have you score those shows and tell us in the comments about productions that have connected you to our current national unrest.