The Power of Puppet Theater

Looking for a show for the whole family? Member Barbara Kempe asks you to consider puppet theaters. 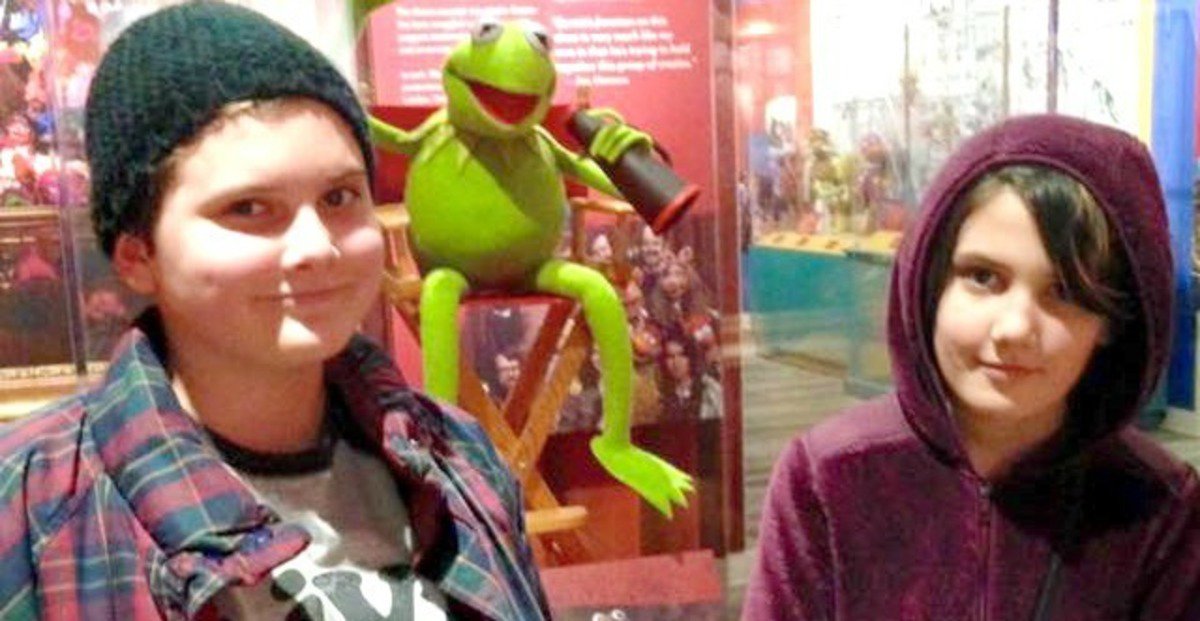 Quinn, left, and Sisi at the Jim Henson exhibit at the Center for Puppetry Arts in Atlanta. | By Barbara Kempe

Parents: This article first appeared in the Show-Score Parents group on Facebook. Join now to connect with other parents about theater and family.

OK, that's not precisely true, but it might as well be. Now 14, she is a lifelong Muppet and puppet enthusiast, though her obsession has waned a bit since the days when she would force us to watch her marionette shows in the living room. (Plus, it's been a while since she created a hand puppet out of a motion-sickness bag.)

Still, she has maintained her interest in watching (and in most cases, owning) every film or show Jim Henson was involved in. As a family we've supported her by traveling to puppet-related exhibits and events and attending loads of puppet theater performances, both here in the city and while on vacation elsewhere.

When I say "puppet theater performance," I'm not talking about shows for adults that happen to have puppets in them, like Avenue Q (which my kids are finally old enough for — hooray!), although the Jim Henson Foundation site has more information on work like that. I'm talking about smaller neighborhood theaters that present shows geared mostly toward young children in which most of the characters are embodied by puppets, marionettes, and the like.

Throughout many years of attending "family-friendly" shows, I've realized that puppet theater productions, more so than other types of children's theater, are designed to appeal both to children and adults. The humor usually exists on two levels, and if the adults are still not engrossed, they can just watch the puppet operators work, which adds another layer of entertainment, at least for me.

Whether you're an out-of-towner or a local, the following NYC-area theaters and groups are definitely worth checking out.

Your family can enjoy puppet theater throughout the summer in all five boroughs.

The classic. The cottage was Sweden's exhibit for an expo in Philadelphia in 1876 and was moved to Central Park the following year. It became home to a marionette company in the 1940s and has been a go-to destination for kid-pleasing productions ever since. The current show is "The Princess, the Emperor and the Duck", an updated version of three Hans Christian Andersen stories.

Price: Tickets are $8 for children and $12 for adults, though group rates are available for schools and nonprofits.

Good to Know: Children under 18 must be accompanied by an adult.The venue has a room that can be reserved for parties, with the price starting at $800.

Directed by veteran puppeteer Penny Jones, this company presents puppet shows for young children and "puppet ballets," in collaboration with orchestras and chamber ensembles, for older kids and adults. Recent shows have included "Peppi and the Pop-Up Dragon", an interactive show set within a huge pop-up book. While the company's repertory season is over until fall, it will be presenting "The Sorcerer's Apprentice" as part of Hudson RiverKids, with shows on Aug. 14 at Pier 62 and Aug. 17 at Pier 25.

Price: $10 for all ages during the regular season. The special performances on Aug. 14 and Aug. 17 are FREE.

Dates and Times: The regular season runs September - April, with occasional special performances in the summer.

Good to Know: The venue has a space for birthday parties. The company is also available for private bookings and can travel to the client's location. Contact company for pricing information.

Long before I had children of my own, I was a nanny for a Brooklyn family who lived right up the block from Puppetworks. I was charmed by the inventive productions put on in this little theater back then, and when I had my own kids I was excited to share this neighborhood gem with them. Current offerings are marionette shows "The Reluctant Dragon" and "Goldilocks & the 3 Bears", performed with hand puppets.

Price: Adults are $10. Kids are $9. Weekend and weekday group rates are available for 20 people or more, with most group tickets costing $8 each.

Good to Know: The venue offers a rental space for parties, with fees ranging between $450-$499, depending on the time of year. A 10% discount is offered on catering from a local pizzeria. Weekend performances are open to all, but weekday performances are ONLY open to groups with advanced reservations, with occasional exceptions for holidays.

A husband-and-wife team founded this touring company, which presents private and public performances all over the city, including on Saturdays in June at the carousel in Bryant Park. The shows put a modern twist on classic tales with a fusion of puppetry and storytelling techniques, as well as goofy songs and plenty of audience participation. Upcoming public productions include "Goldilocks", "The Three Little Pigs", and "The Lion and the Mouse".

Dates and Times: Public performances are scheduled on most Saturdays (and occasional Sundays and weekdays) through October 15.

Good to Know: The company offers a wide variety of puppet shows -- including fairy tales, Jewish stories, and holiday stories -- that can be hired for private events. Puppetry workshops can be added for an extra charge. Contact the company for pricing information.

This traveling puppet theater, the oldest one of its kind in the country, takes the shows and workshops from the Swedish Cottage (see above) to parks and schools in all five boroughs. The current offering is "Cinderella Samba", an updated, Brazilian-influenced take on the beloved princess story. Instead of the royal ball, Cinderella attends a Carnaval gala in Rio and dances with the dashing Prince Paulo. Expect festive music and elaborately costumed marionettes. Performances continue all summer long throughout the city.

Dates and Times: Near-daily performances throughout the five boroughs through August 30.

Good to Know: Communities can request performances here, so long as they are free and open to the public. Priority is given to under-resourced neighborhoods.

What shows do you like bringing your children to? Let us know if we missed anything!