Tony Nominee, Chad Kimball Talks About ‘Come From Away’ and the Power of the Human Spirit

“It’s a testament to seeing people as people, first and foremost, and loving them as they are,” Kimball talks to Show-Score about the hit musical, “Come From Away”.

Now on Broadway, “Come From Away” tells the true story of the nearly 7,000 passengers from 38 planes diverted to Gander, Newfoundland on September 11, 2001. The unique tale unfolds in the days that followed, honoring the residents of Gander who welcomed these “plane people” to “the rock” like family.

Tony Award nominee, Chad Kimball (“Memphis”) is a member of the show’s outstanding cast, playing a variety of characters including half of same sex and same-named couple, “Kevin” and “Kevin” (the other “Kevin”is played by Cesar Samoya).

Yesterday, we had a chance to catch up Kimball and hear his perspective on “Come From Away.” 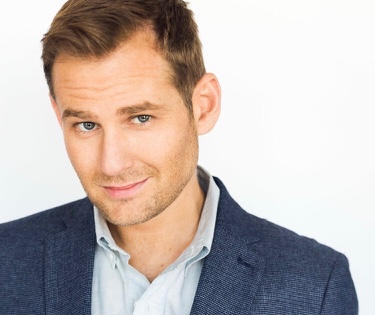 Show-Score: What was your reaction when you first read the script for “Come From Away”?

Chad Kimball: I didn't know that these events transpired in Canada when I first read the script. I think anybody who sees the show is really pleasantly surprised by the story because it's so equanimous. It's so kind. It's so benevolent, and I was just really surprised. I thought, "This can't be a real story" and to know that it is, I was surprised and very excited to be involved with it.

S-S: What do you think of the fact that "Come From Away" doesn't really spend much time directly addressing the acts of terrorism that happened in the U.S. on 9/11?

CK: I think when we think of 9/11 we always think of the Towers and we think of the Pentagon; we think of the absolute terror that day. It's hard to escape. Those were evil acts that occurred, and they stamped the day in its entirety. [In Come From Away] we don't necessarily talk about the tragedies in the attacks in New York and Washington and Pennsylvania, but they are there. They are definitely there underneath the entire story, and I think that's what gives it its gravitas.

S-S: The show really highlights our shared humanity in an interesting way. That we're all the same and kind-hearted at the core. We're all human - no matter our race, nationality or orientation. What do you think of that message in today's climate, not just immediately after 9/11?

CK: The interesting thing to me is that we only recognize kindness because we also recognize evil.

I think that to a certain extent, this show resonates with people because we do live in a world that is still full of evil. Not only were we attacked on 9/11 but attacks continue to come... We are aware of the other side of the human coin, and whether that's being unkind to our neighbors or other things… So I think what makes it so special is that we are immersed in this indelible human condition that goes from one end of the spectrum to the other. To be at the end of the spectrum where kindness and goodness saves the day, I think is quite important.

S-S: What was it like for you and the cast when Canada’s Prime Minister, Justin Trudeau (as well as Ivanka Trump) saw “Come From Away” last week?

CK: I think the cool perspective for us was we knew that Trudeau was coming. We didn't know that Ivanka was coming… I think some people were surprised, but in this cast and in this company the welcoming spirit is on display. Whatever your political persuasions, it was neat to be able to welcome two opposite sides of the equation and all be together in one spot to recognize and celebrate the good of humanity. That was something that I reflected on that night.

S-S: What are your thoughts on the bar scene that you and Caesar do, playing a gay couple, and how they worry about their sexuality being revealed to these strangers in Gander?

CK: It's important because, again, it's a testament to seeing people as people, first and foremost, and loving them as they are. I think that that's also one of the strong lessons from the show

The fact that there's humor infused in it I think is really important. Humor is one of the strongest ways people communicate. When you can make people laugh, they're more inclined to listen to what you're saying. The writers have infused laughter and comedy beautifully in this show.

I think that the humor was key. I also think that the people in Gander are key. We did the show in Gander for the town and the towns surrounding before we went to Toronto and we performed it in the ice hockey rink. We were worried about some of the material in the show. We were hoping that we weren't making fun of anybody or sending it up or anything. We were worried about the perception of these two gay guys, but they just ate it up. They loved it. They loved every little last bit and I think it played as well there as it plays in New York.

Which of the show's plot lines resonated with you the most? Tell us in the comments!