You Too Can Enter “Hamilton” Heaven: Just Play The Odds

Digital lotteries are a theater fan's best friend. One Show-Score member shares some helpful tips for beating the odds. 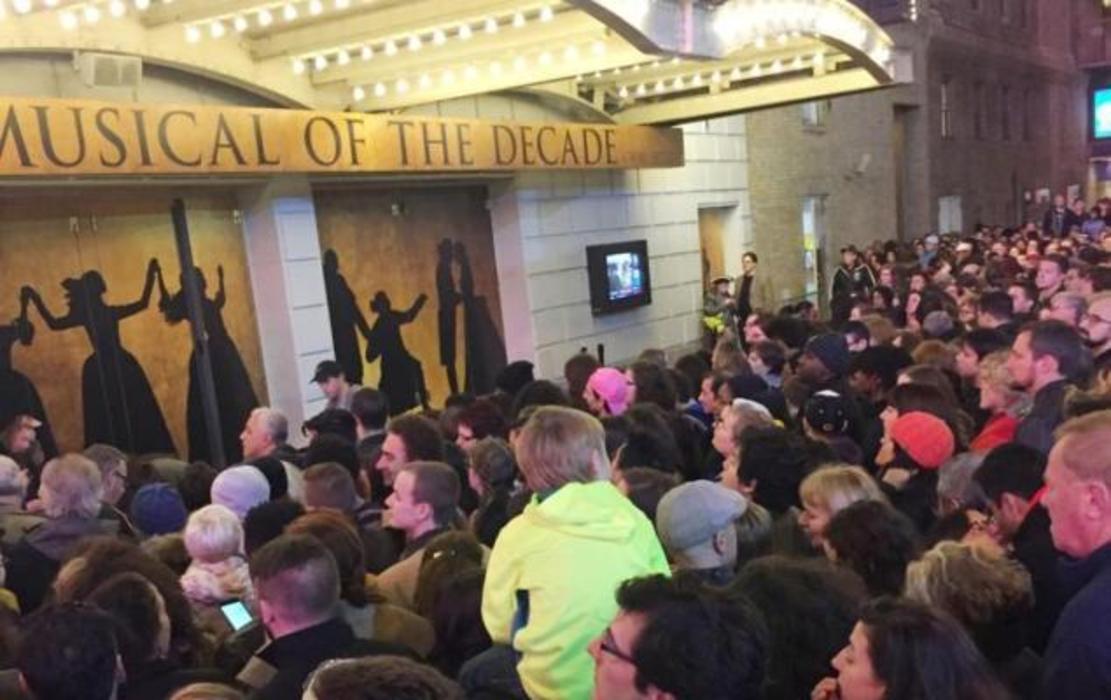 When it comes to brains, sophistication, and all-around savoir faire, my wife Robin is tops. But of all her many gifts, she has one skill that, for a theater buff like me, beats all the others. She has a golden touch with digital theater lotteries.

For those of you who would argue that lotteries are all luck and no skill, I offer this— thanks to Robin’s lottery savvy, I’ve seen five unforgettable Broadway shows in the last six months: "Hamilton," "Wicked," "Sunset Boulevard," "War Paint" and "Aladdin"!

By far the best of these lottery experiences was "Hamilton." Not only is it the most popular lottery out there, it’s the most rewarding, offering winners $10 tickets for first and second row orchestra seats. (Premium tickets in that section can go for up to $2,000.)

But it wasn’t just the great price or the prime seats that made the “Hamilton” lottery so good—a digital system built to field thousands of daily hopefuls still managed to make the experience personal for the winners.

The day I won, I got the good news via email, paid for my two golden tickets, and hopped the subway to pick them up at least 30 minutes before the show (see Robin’s Rule #2). They ask lottery winners to line up together, separate from the throng of regular ticket holders—although I think I would have known my fellow winners that day just by the matching idiotic grins we sported. We shared our personal “Hamilton” histories while we waited, including one true believer who had listened to the cast album 32 times. One among us had entered the lottery for the first time that day, while others had tried their luck every day since the lottery was introduced. We all stood there, the Lucky Ones, savoring the moment together. I hold “Hamilton” ticket A105 in my wallet to this day.

How do you have your own "Hamilton" moment?  The mechanics of entering the major digital theater lotteries are well-documented by Show-Score. But here are Robin’s tips for playing the lottery game the way she does.

1.  Play Often.  It's simple math—the more shows you try for, the more chances to win. If you’re not sure where to start, there are a number of websites (including Show-Score, obviously) that keep a running list of Broadway shows that offer either a digital or in-person lottery. Robin does her legwork online. then enters every lottery of every show she’s interested in. Since most (but not all) lotteries allow one person to reserve two tickets, she enters us separately—doubling our chances. And then she does it again, and again, and again, for every day we’re free.

For most of the lotteries, you are required to re-enter daily, which, yes, can be time-consuming. Robin’s favorite lotteries let you either enter once for a whole week of shows or enter in advance for any one show within a weeklong period. These include "The Book of Mormon", "Groundhog Day", and "Kinky Boots.”

2.  Follow the Rules.  To the letter. Each lottery has its own procedures: when to enter, when they let you know if you've won, when to respond if you win (often there’s only a one-hour purchase window), and when to pick up your tickets. There’s no worse feeling than missing your chance because you didn’t read the fine print.

Robin has a pet peeve about the notification system. Many shows let you know if you've won tickets for that evening’s performance around 2pm—but if you’re attending a matinee performance that day, chances are that notification comes as you’re sitting down to a show, leaving you tapping away frantically at your phone as the lights go down. Easy fix? Like “Hamilton” already does, lotteries should alert people at 1pm instead.

3.  Know Your Other Options. Sometimes it’s good to remember that you don’t have to play the odds for good tickets to a Broadway show. The lottery model requires a flexible daily schedule and a lot of patience. Rush tickets might be a better choice for people who aren’t as email- or social media-centric, and standing room only tickets are often some of the best deals out there—as long as you bring the right footwear! (Show-Score can give you tips on both general rush and standing room tickets.) The Theatre Development Fund (TDF) offers its members good seats at prices similar to those charged by the lottery—a great option for New York residents with a passion for theater. Robin's rule: take the sure ticket every time.

So, fellow members of the Show-Score community, with some luck “Hamilton”, “Dear Evan Hansen”, “Sweeney Todd” and a host of other Broadway and off-Broadway tickets are just a few clicks away.

What’s been your lottery experience? Share your own tips and tactics!