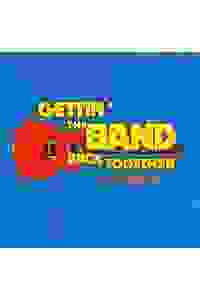 Gettin’ the Band Back Together (George Street Playhouse)

George Street Playhouse presents the pre-Broadway production of the new musical comedy, the story of a laid off 40-year-old who finds that the only hope for his future lies in revisiting his rock and roll past. More…

Mitch Papadopolous always dreamed about being the next Bon Jovi, but he chose security over stardom and left those daydreams behind for a day job. For a while he thought he had everything – the high paying job, the high-rise apartment – until his 40th birthday when he got handed a pink slip and had to move back in with his Mom in Sayreville, New Jersey.

And when his high school arch nemesis (with a 20-year-old grudge and a tangerine spray tan) threatens to foreclose on their house, this big-shot banker must save his small-town home the only way he can…by winning The Battle of the Bands.

So he dusts off his guitar, gathers his old gang (the math teacher who isn’t good at math, the Irish cop who dreams about being on Broadway, the dermatologist who can’t get a date, and a 16-year-old Jewish rapper who makes Vanilla Ice look cool), and sets out to win the battle…and maybe even win back the high school sweetheart he left behind…proving it’s never too late to give your dreams one last shot.

See it if Nostalgia, humor, and good times enough that I didn’t care about the paper-thin, predictable plot.

Don't see it if You want a musical with substance and meaningful impact.

Don't see it if you don't understand the Garage Band phenomenon.

Also My friends and I saw this production twice, but I was always concerned about how it would transfer to a broader audience. I have tickets for the week after opening so I guess I will find out.... Read more Read less

See it if I enjoyed the show. Many of the scenes and some of the songs were absolutely hilarious, especially the scene at the Orthodox Jewish wedding

Don't see it if and the singer at the diner was doing his "big" number and having a meltdown. The cast was very very enthusiastic.

Also At some point the whole show became very cartoonish. Marylu Henner looked terrific and had a lot of energy, but I felt show was just a little too old for her role. she was a combination of Mrs. Robinson and the Banger Sisters. It was a crowd pleaser.... Read more Read less

See it if you love NJ, or hate NJ. It's funny for everyone. The NJ show closed with great reviews, and the Broadway show is hilarious.

Don't see it if you want a really serious, upsetting musical. This one makes you laugh.

See it if you like “classic” rock and have a modern sense of humor.

Don't see it if you are easily offended or are looking for a serious night out.

See it if You like funny, shows with great humor about NY/NJ, great Jewish jokes and humor. Very light and clever cast and storyline.

Don't see it if You looking for a musical with dancing and strong singing.

Don't see it if you don't like to smile.

See it if If you love plays that get the audience involved, star Marilu Henner, and is hilarious then come see this show

Don't see it if You dislike comedy and musicals

See it if Very engaging with lots of corny humor. Easy to like.

Don't see it if You want a deep meaningful message type of show.